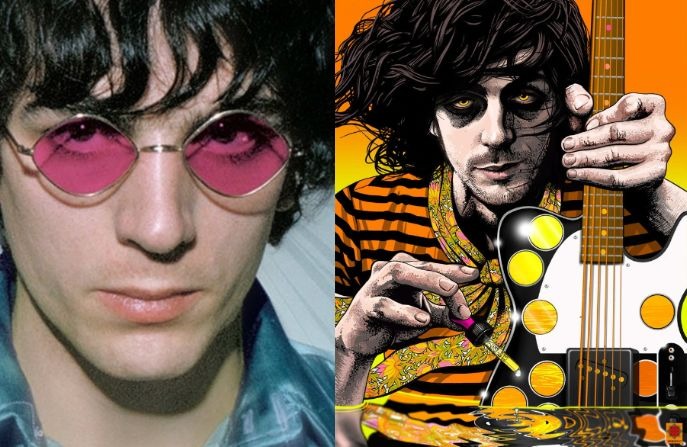 “Octopus” (originally recorded as “Clowns and Jugglers” and also known as “The Madcap Laughs”, is a song by Syd Barrett that appeared on his first solo album, The Madcap Laughs.

Syd Barrett said about the song:

“I carried that about in my head for about six months before I actually wrote it so maybe that’s why it came out so well. The idea was like those number songs like Green Grow the Rushes, O where you have, say, twelve lines each related to the next and an overall theme. It’s like a fool-proof combination of lyrics, really, and then the chorus comes in and changes the tempo but holds the whole thing together.”

Syd Barrett, “Octopus” directly quotes a section from the poem “Rilloby-Rill” by Sir Henry Newbolt and the song features a variety of other influences as well.

After Barrett left Pink Floyd in April 1968, Peter Jenner from the band’s management followed suit. Jenner led Barrett into EMI Studios to record some tracks. in May, that would later be released on Barrett’s first solo album. During the May sessions, Jenner failed to record, properly, any vocals at all, for several tracks one of them, “Clown and Jugglers”. Sessions stopped once Barrett was in psychiatric care, apparently after a drive around Britain in his Mini.

After New Year 1969, a somewhat recovered Barrett decided upon returning to a musical career; Barrett contacted EMI, and was passed on to Malcolm Jones, the then-head of EMI’s new prog rock label, Harvest. Barrett wanted to recover the Jenner-produced sessions recordings; several tracks, including “Clowns and Jugglers”, were improved upon.

An early version of the song was released on the Barrett rarities album Opel (1988) under the title “Clowns and Jugglers”, which was recorded with the band Soft Machine. The 1993 re-releases of The Madcap Laughs and Opel contain alternate versions of “Octopus” and “Clowns and Jugglers” respectively, as bonus tracks.