Gene Simmons is being prosecuted for sexual harassment, according to TMZ. The lawsuit was filed by a journalist who accused him last month of having caressed her body – initially by taking her hand and putting it on her knee during an interview with him and his bandmate Paul Stanley in San Manuel Casino, in California.

She said that, although uncomfortable, the interview continued. According to the lawsuit, he would have praised her hand, saying she was soft and made other inappropriate comments. When the musician put his hand on her neck, she ended the conversation, under his protests. Later, in a group photo, he would have touched the journalist’s buttocks.

Gene has not talked about the matter yet.

Last month, two women shared stories on Twitter of encounters with Simmons. The first, actress Mary E. McGlynn, said that, in a studio, she went to shake Simmons’ hand, and he responded by pointing to his penis and saying, “That’s the fun machine.”

Comics artist Tess Fowler saw McGlynn’s tweet and described meeting Simmons at San Diego Comic Con in 2004. ‘He hugged me and then told me I was keeping the candy away from him (hugging with just my upper body),” she wrote. “He grabbed my hips and thrust against me.” When asked at the time for comment on these two claims a representative for Mr. Simmons stated, “The response is simple.. that absolutely did NOT happen.” 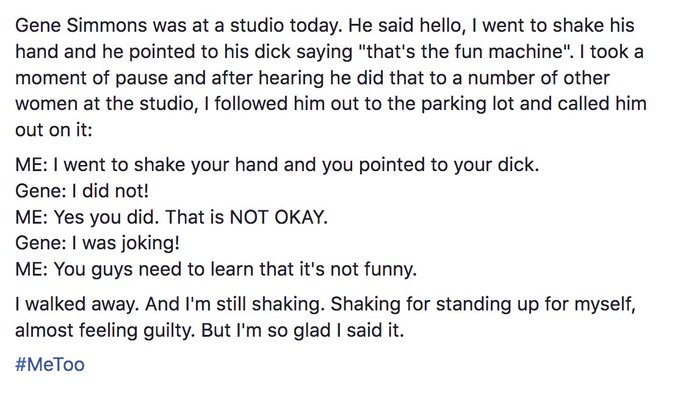 I was hesitant to tweet this, but it has to stop. This happened to me today when I ran into Gene Simmons. #MeToo pic.twitter.com/P3oSyae2nj

David Coverdale reveals that “Fool For Your Loving” was made for B.B King
Back In Time: Jack Black destroys singing “Holy Diver with the Roots
Advertisement
To Top