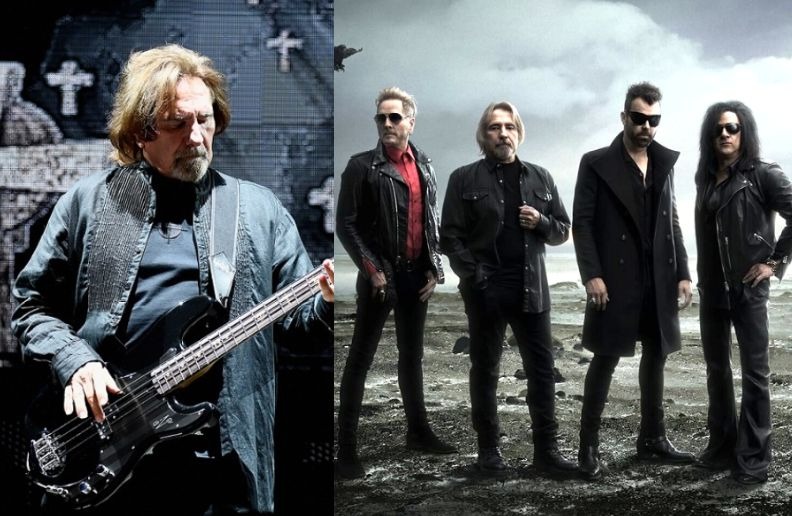 In an interview with Bilboard, legendary Black Sabbath bassist Geezer Butler revealed that retirement drove him crazy after a year and that was one of the main reasons he got involved in the supergroup Deadland Ritual, that features Geezer alongside ex-GN’R drummer Matt Sorum, Billy Idol guitarist Steve Stevens, and singer Franky Perez (Apocalyptica, Scars on Broadway).

Tell me about the first in-person meeting [with Deadland Ritual].

“We sat down at my favorite vegan restaurant, Crossroads on Melrose Avenue, and talked about different music, and the kind of things I was thinking about. And the end of it, they all say, ‘we want you to join the band. Do you want to join?’ And I said, ‘Yeah.'”

“After 18 months of retirement, I would have said yes to anything! [laughs] After Sabbath finished, I just wanted to take time off and wake up every day and think, ‘Oh, great, I’ve got nothing to do today.’

“That was okay for a year. After I put on about 20 pounds and watched every TV show there was I just went nuts.”

You’ve done solo albums, including G/Z/R with Burton C. Bell from Fear Factory… had you not considered doing something like that again?

“Yeah, I’ll never stop writing. But it became more of a hobby than anything else.

“I was sorta relaxed and going off on different tangents in my little studio here, with the thought of eventually doing a G/Z/R album, but then Deadland Ritual came about, and that was it.”

In those 18 months of retirement, was there a time when you didn’t even pick up an instrument for months at a time?

“Yeah, I probably went for a couple of months. I’ve been doing a lot of traveling since Sabbath finished.

“I went on my first cruise. It started off in Italy and went through Greece, Croatia, Slovenia and finished up in Venice.”

When was the first time you played with Deadland Ritual and what songs did you play?

“We recorded the first three that were written, I suppose that would be… God, I have no concept of time whatsoever – probably October/November we went in the studio and recorded the three songs.

“I’d already been to Steve’s house, and we came up with the third song, ‘Down in Flames,’ which is the one that’s out now.”

Lyrically, you’re not on any of those, right? And what topics are you writing about these days?

“Yeah, I’m writing lyrics for the fourth song we’ve done, which I think is going to be called ‘City of Night’; that’s the working title, anyway. I just finished writing those lyrics.

“It’s just about… it’s hard to explain really… any old crap. About the end of things, the End of Days. And looking back on your life wishing you’d done things you could have done, but it’s too late. It’s a bit like the ‘song before I died’ kind of thing.

“I don’t actually write the lyrics at home, just the music. In writing for the new G/Z/R album, I hadn’t gotten as far as lyrics, because I haven’t got a singer. And I’m useless at singing. I was just coming up with different riffs and stuff.”

Did you bring any of the songs you were working on for G/Z/R into Deadland Ritual?

“It’s good to have Steve’s feedback on it; I had in my mind how it should go, then Steve suggested this, that and the other. And I was like ‘yeah, I never thought of that,’ and it made the whole thing come alive.

“Which is what I miss working on me own; that bounce-back. We were working on it yesterday. It’s really very heavy. Probably the heaviest one we’ve done so far.”

What songs will fill out Deadland Ritual’s live set?

“We’re thinking about doing seven original songs, which we’ve done up to now – unless we write more between now and May. Probably three or four Sabbath songs.

“‘N.I.B.,’ because that’s what I’m associated with particularly; the bass intro and all that kind of stuff. And some stuff that Sabbath didn’t do, like ‘Symptom of the Universe.’ Steve loves that one.

“And Franky likes ‘Heaven and Hell,’ and we might do one or two others; see which ones work out best in rehearsals. But more obscure Sabbath songs, rather than ‘Iron Man’ or ‘Paranoid,’ that’s been done a million times.

“A couple Velvet Revolver [tracks] – ‘Slither’ definitely, I’m not sure ’bout the second one, and I think we’re going to do ‘Rebel Yell,’ Billy Idol! [Laughs] I have to learn them all between now and May!”

How far into the future do you look with Deadland Ritual?

“At the moment we’re just going to see how it goes. We’ve written seven songs up to now, so we have to get those recorded. We’ve got quite a few record companies interested.

“But at first, it was ‘have a jam, and let’s do some festivals.’ But it seems to have gone beyond that, people are taking it more seriously now. So if things work out with the gigs that we do we’ll carry on.

“I’m excited about it. I really like the music we’re doing, not restricted to any kind of formula. And as I say, each track stands on its own, different in its own way. I’m really looking forward to it.”