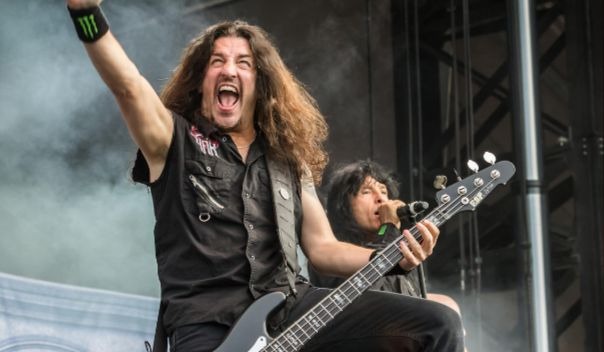 In an interview with The Sessions Panel, Anthrax bassist Frank Bello remembered how he became part of the band after being their roadie.

“I heard through the grapevine they were going to be auditioning bass players, so of course, I put the word in – ‘Look, I play. You all know me. I’m putting it out there.’ Long story short, got the audition, scared. You know what’s weird? You can be friends with these guys forever – doesn’t matter.

“The audition… [Charlie Benante, Anthrax drummer and Bello’s uncle], I think he just held back, but he was hoping, wishing [and] pumping for me, but at the same time, he said, ‘Learn the parts. Learn the parts’…

“I was nervous. Even though I was friends with these guys, I was hanging with them all the time, I was shaking. It just worked. After the first song, then it was like, ‘Okay, it’s hang-out time.’ I got through the first song – I think it was ‘Metal Thrashing Mad’…

About Anthrax current state, he said:

“Since we did that ‘Big Four’ thing — Metallica, Slayer, Megadeth, Anthrax – there’s been this whole new generation of fans that came in that maybe never heard of Anthrax or maybe [had only] heard the name [and said,] ‘Maybe I’ll check a record out,’ and became an Anthrax fan.

“Thank you Metallica for putting the ‘Big Four’ on. We’re finding this whole new thing go on, along with our own fan base, which is just a really great thing to see even at this time in our life. The last two Anthrax records, people are saying it’s our best work yet. To hear that? Are you kidding me?

“For all the pain and hardship that goes into these records… there’s a lot of stuff that goes on – a lot of fighting. Not fist-fighting, but personality clashes, and I think that leads to the intensity of the record…

“We’re getting along better than we ever have, which is crazy, and we’re more excited about Anthrax now than I think we’ve ever been. That’s what I’m really excited about.”