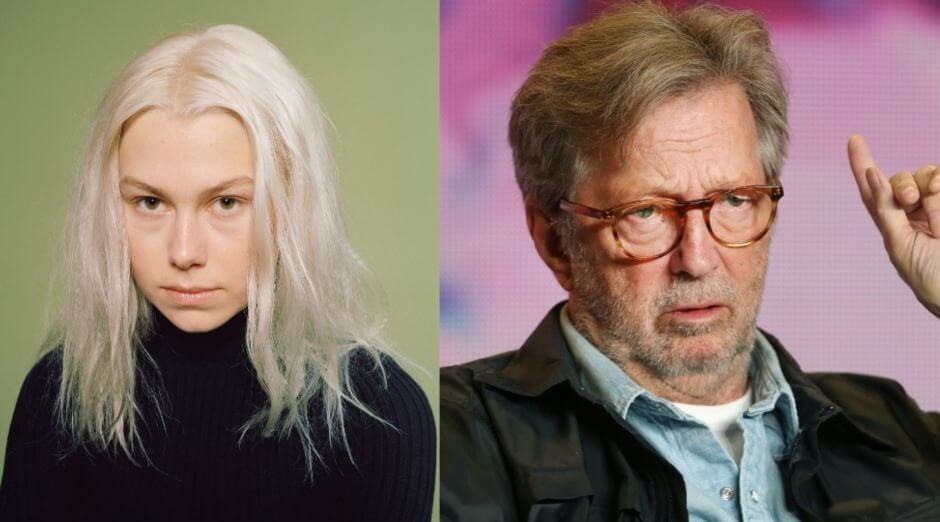 American Indie Rock musician Phoebe Bridges talked about her new song “Moon Song” that says “We hate ‘Tears In Heaven’/ But it’s sad that his baby died.” She explained in an interview with NME why the lyrics talk about Eric Clapton and stated that he makes “extremely mediocre music.”

Singer Phoebe Bridgers explained why she talks about Eric Clapton on new song and why she thinks he makes “extremely mediocre music”:

“You know, I don’t think our Venn diagrams are very connected. “I have such an Eric Clapton rant, because I think it’s just extremely mediocre music, but also he’s a famous racist.”

“Sometimes I think people are too problematic to be cancelled, or not relevant enough to be cancelled. I mean, it wouldn’t even make news if he said something racist today, because he went on a racist rant in the 60s or 70s that was very famous.”

“The lyric used to be, ‘we hate Eric Clapton‘. It’s actually kind of worse now. Because it’s the dead baby song, which is a heartbreaking song. If I were to pick an Eric Clapton song, it’s up there with the ones that I actually like. So, it’s kind of a lie on the record, but it sounds more poetic.”

Eric Clapton made racist comments back in 1976 during a show at the Birmingham Odeon. He said:

“Do we have any foreigners in the audience tonight? If so, please put up your hands … So where are you? Well wherever you all are, I think you should all just leave. Not just leave the hall, leave our country … I don’t want you here, in the room or in my country. Listen to me, man! I think we should send them all back. Stop Britain from becoming a black colony.”

“Get the foreigners out. And Get the wogs out. Get the coons out. Keep Britain white … The black wogs and coons and Arabs and f*cking Jamaicans don’t belong here, we don’t want them here. This is England, this is a white country, we don’t want any black wogs and coons living here. We need to make clear to them they are not welcome. England is for white people, man … This is Great Britain, a white country, what is happening to us, for f*ck’s sake? … Throw the wogs out! Keep Britain white!” (Source: The Daily Beast)

Looking back on his past in 2018 Clapton apologized for that statement:

“I sabotaged everything I got involved with. I was so ashamed of who I was, a kind of semi-racist, which didn’t make sense. Half of my friends were black, I dated a black woman, and I championed black music,” the Classic Rock musician said.