“Mistreated” appeared on Deep Purple’s 1974 album “Burn” and it was written by the guitarist Ritchie Blackmore and new vocalist at the time, David Coverdale.

In the live performances bassist Glenn Hughes would introduce “Mistreated” as a song that Blackmore had written a few years prior to Burn. The song was considered for their earlier album “Machine Head”, but Blackmore decided not to release it.

“Yeah, the most primitive vocal I’ve ever written.

“I was messing around with – certainly not the incredible riff Ritchie [Blackmore] made – I was playing his guitar sneakily in the crypt of the Clearwell Castle. You know when you feel somebody’s watching, and I turned around – ‘Oh my god!’ – he [Ritchie] went ‘No, no, no, that sounds great. What is it?’ 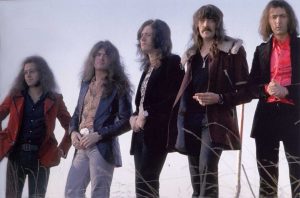 “It was just F#, it was great, you can have all these open strings. And he grabbed it and just started going *sings main melody* and I went over to mic – no thought, no practice, nothing, and just screamed ‘I’ve been mistreated.’ We just jammed the fucking tune.

“And then when the rest of Purple came – regardless of who wrote the songs, the whole band contributed to the identity of those songs, and that was a huge strength of bands like Zeppelin or whatever – each member contributes to the final thing whether they wrote the song or not. What they do is help in the arrangement and presentation.

“It was incredibly inspiring to do, and a really simple song.”

You can hear the song below: