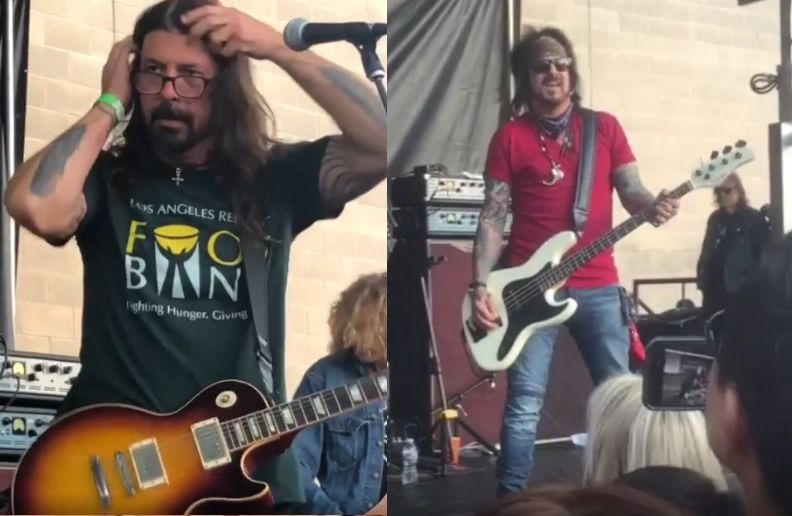 The 11-year-old son of Taylor Hawkings, the Foo Fighters drummers, has also shown talent. He played drums alongside father, Dave Grohl and Mötley Crüe at a charity event.

Oliver Shane Hawkings performed with his father and cover band Chevy Metal. The song featured was a version of “The Miss You” by The Rolling Stones.

Dave Grohl also played the song and many others, such as Rolling Stones’ “Bitch”, Thin Lizzy’s “Jailbreak” and Black Sabbath’s “The Wizard”.

Can we talk about the bad ass #chevymetal performances today at the #eatdrinksupport event at the LA food bank? Because I’m not sure I live on this planet anymore. We got to see Taylor’s kid kill it on drums, and many many more surprises (including Lisa Loeb singing David Bowie). Freakin nuts! #davegrohl #backbeatbbq #laregionalfoodbank #foofighters #taylorhawkins

Oliver Taylor Hawkins (born February 17, 1972) is an American musician, best known as the drummer of the rock band Foo Fighters. Prior to joining the band in 1997, he was the touring drummer for Alanis Morissette as well as the drummer in a progressive experimental band called Sylvia. In 2004, Hawkins formed his own side project, Taylor Hawkins and the Coattail Riders, in which he plays drums and sings. He was voted “Best Rock Drummer” in 2005 by the UK drumming magazine Rhythm.

Oliver Taylor Hawkins was born in Fort Worth, Texas on February 17, 1972. His family moved to Laguna Beach, California in 1976, where Hawkins grew up. Hawkins has a brother, Jason, and a sister, Heather. He attended Thurston Jr. High School and later went to Laguna Beach High School. After leaving the Orange County-based band Sylvia (later emerging as ANYONE), he joined up as the drummer for Sass Jordan. He left to act as the drummer for Alanis Morissette.