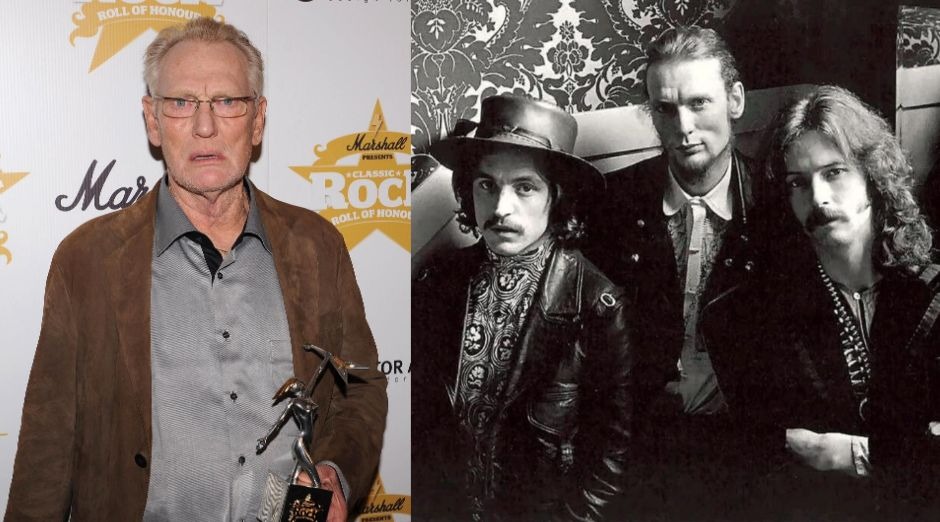 The legendary drummer Ginger Baker drummer died on sunday, October 6, at 80, according to his family. The musician was part of the supergroup Cream with Eric Clapton (guitar and vocals) and the late Jack Bruce (bass and vocals), he was also considered one of the best drummers of all time.

The musician’s family said on a social network that he died on Sunday:

His daughter Nettie confirmed that Baker died in the UK, but gave no further details.

The family had said on September 25 that Baker was in critical condition at the hospital.

In 2013, he revealed that years of heavy smoking had left him with chronic obstructive pulmonary disease. He was also suffering from chronic back pain from degenerative arthritis.

He underwent open-heart surgery in 2016, writing on his blog:

“Just seen doctor…bit shock…no more gigs for this old drummer…everything is off…of all things I never thought it would be my heart.”

Baker used his jazz technique and his knowledge of blues in popular music and became one of the most admired and also feared musicians.

Taken as temperamental, he was born in London.

With two bass drums (that part of the drum that works with his feet), he invented a fast polyrhythmic percussion style that inspired other musicians after him.

He was also known for getting mad offstage – he hated his bandmate Jack Bruce.

The musician attacked a documentary filmmaker, Jay Bulger, and left him with a broken nose. The fantastic movie was released in 2012, was titled “Beware of Mr. Baker”

See the documentary trailer below:

One the best drummers in history

Rolling Stone magazine once ranked him as the third greatest drummer of all time, behind Keith Moon (The Who) and John Bonham (Led Zeppelin).

Baker despised Moon, who he classified as a drummer who only beat, without style.

He saw himself as a complete and sophisticated musician – an arranger, composer, art scholar who absorbed sounds from all over the world.

Ginger played jazz during his teens and spent years in Africa in the 1970s, where he became a close friend of Fela Kuti, the Nigerian musician and activist.

“He was so unique and had a very distinct personality,” said Stewart Copeland of The Police in 2013.

“No one was following in their footsteps, everyone was trying to be John Bonham, but it’s rare to hear anyone try to impersonate Ginger Baker.”

Many fans, however, think of Baker as a star, who joined Eric Clapton and Bruce in the mid-1960s to form Cream – a “power trio” that was one of the first supergroups.

The three were well known in the London blues scene and together made history by raising the musical power beyond the songs, even in hits such as “Sunshine of Your Love”, “I Feel Free” and “White Room”.

Cream was one of the most successful bands of its time, selling over 10 million records.

But by 1968 Baker and Bruce were already sold out, and even Eric Clapton was tired of the jam marathons – one song, “Toad,” had a long drum solo.

Baker heard from documentary filmmaker Bulger that he was one of the parents of heavy metal, and replied that the style “should have been aborted.”

To the surprise of many, especially Clapton, he and Baker soon rejoined another supergroup, Blind Faith, which also had keyboardist and singer Stevie Winwood and bassist Ric Grech.

According to Clapton, he and Winwood were playing informally when Baker appeared (the drummer claimed Clapton had invited him).

They were named Blind Faith by Clapton himself.

There were high expectations for the ensemble from the moment it premiered in June 1969 at a concert for 100,000 people at Hyde Park in London.

The group dissolved shortly after a single record, which had on its cover a picture of a topless girl.

From the 1970s, Baker became more unpredictable. He moved to Nigeria, started playing polo and drove a Land Rover through the Sahara desert.

He then moved to a ranch in South Africa, divorced his first wife, and got tired three more times.

He recorded with Fela Kuti and other Nigerians, played with Art Blakey, Elvin Jones and other jazz drummers, and also with Public Image Ltd (John Lydon’s Sex Pistols band).

He founded the Ginger Baker’s Air Force, which cost a fortune and imploded after two albums.

The best of enemies

Baker put up with his former enemy, Bruce, when Cream was nominated for the Rock and Roll Hall of Fame in 1993, and for the band’s reunion shows a decade later.

At age 70, Baker continued to present despite arthritis, heart problems, hearing loss from his years with Cream and lung disease from smoking.

Familiar with addictions and an enemy of modesty, he titled his memoir “Hellraiser: The Autobiography of the World’s Greatest Drummer” (“Hellraiser” is a troublemaker for being drunk).

An excerpt from the book: “John Bonham once said that there were only two drummers in English rock: himself and Ginger Baker. My reaction was, “You cheeky bastard!”

Born in 1939, Peter Edward Baker was the son of a bricklayer who died during World War II when Ginger was 4 years old.

His father left a letter Baker often quoted: “Use your fists, they are often your best friends.”

Baker became an adult when London was meeting the blues, and among the pioneers were names that would become big stars, such as Clapton, Mick Jagger, and Jimmy Page among them.

Baker joined Alexis Korner’s Blues Incorporated, where he met bassist Jack Bruce, whom he quickly disliked for playing too loudly.

Clapton was a guitar player famous for his work with the Yardbirds ensemble and the John Mayall’s Blues Breakers.

Clapton, Baker, and Bruce called their group Cream – in English, the word is a metaphor for the best – because they considered themselves the most technical musicians.