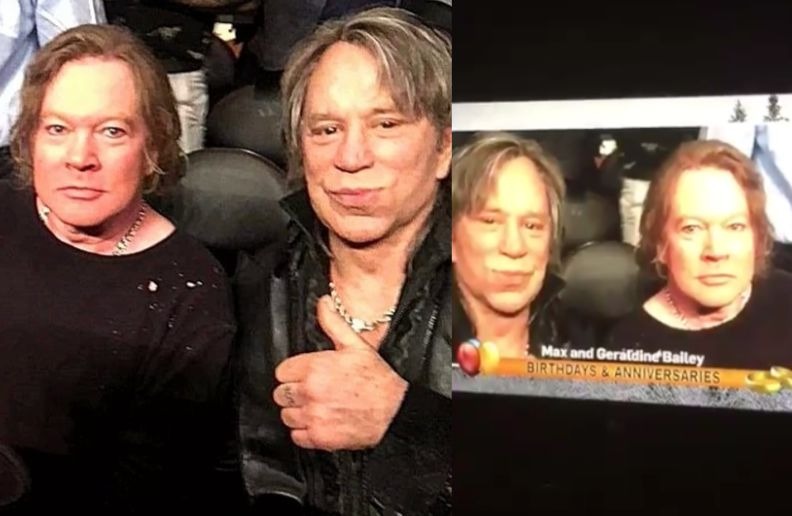 A local TV station in Newfoundland, Canada, showed a photo of singer Axl Rose (Guns N ‘Roses) and actor Mickey Rourke as a couple. The confusion would have been made by an NTV affiliate in the city.

Newsmax’s John Cardillo even joked that “No, these are not two retired teachers waiting for their grandchildren’s recital while their husbands find parking.” They are Mickey Rourke and Axl Rose in a boxing match In Los Angeles”.

Now the Canadian TV station fell into a play made by a viewer, who sent the same photo as being from a couple named Max and Geraldine Bailey. Without checking the origin, the production showed the photo – and, of course, the moment viralized in the social networks.

Actor Mickey Rourke and vocalist Axl Rose were in the audience for a boxing match at the Staples Center in Los Angeles. Success among women in the nineties, the two were unrecognizable in a photo with a fan that is circulating online, and came to be called “aunts” in social networks.

Axl Rose has 56 years old and has recently struggled with his weight and was unrecognizable for the generation that was marked by his enviable physique, while Mickey Rourke, success in the nineties with the film ‘9 Weeks and Half Love ‘has gone through excessive aesthetic procedures and today is almost unrecognizable by the fans.

Philip Andre “Mickey” Rourke Jr. was born on September 16, 1952 and is an American actor and screenwriter (and less notably, a retired boxer) who has appeared primarily as a leading man in drama, action, and thriller films.