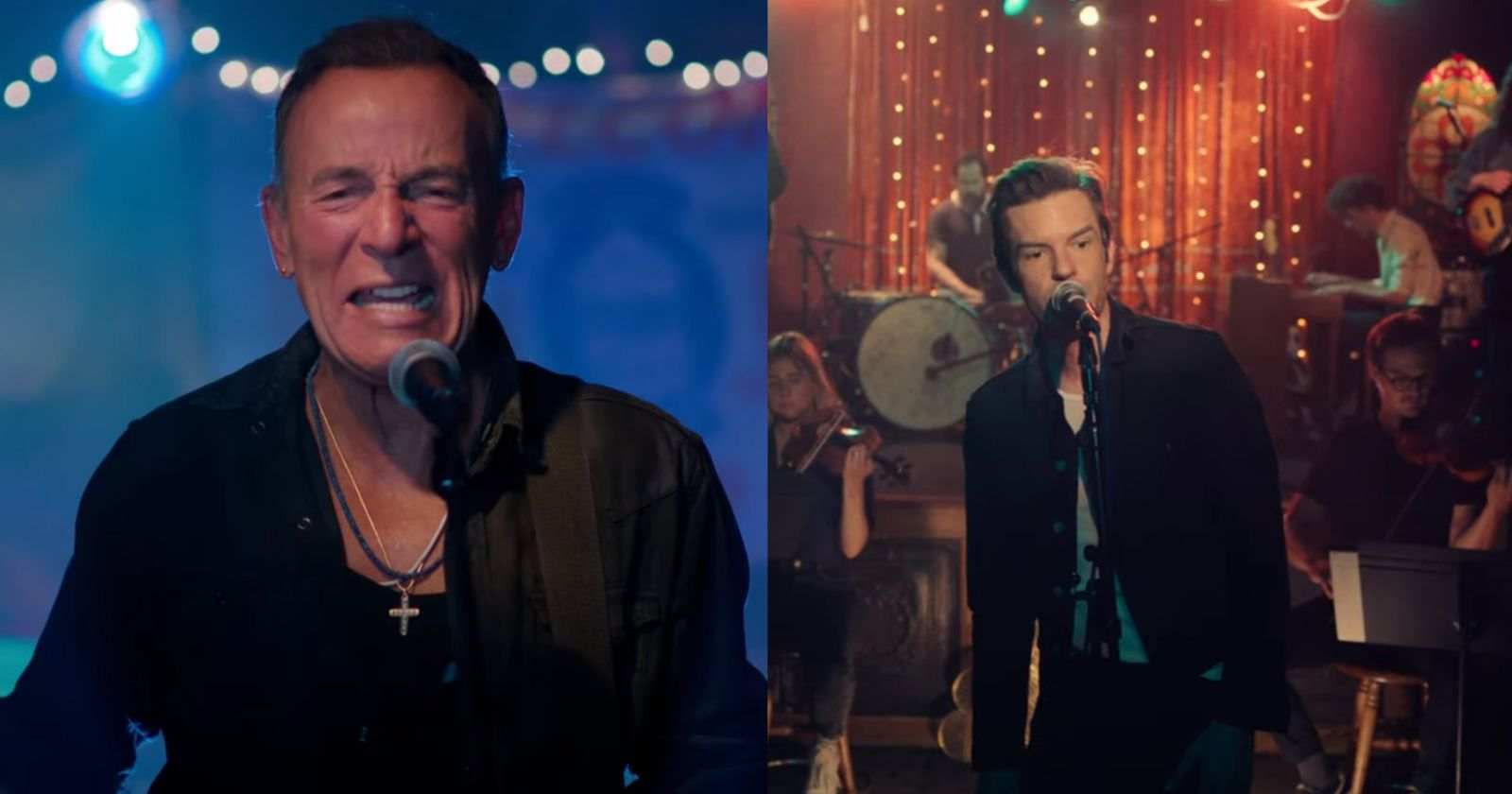 Bruce Springsteen and The Killers released the duet “Dustland” that is a remake of the song “A Dustland Fairytale” of The Killers 2008 album “Day and Age”. Singer Brandon Flowers talked about the track saying it is an “attempt to better understand my dad, who is sometimes a mystery to me. To grieve for my mother (She died in 2010 after battling a brain tumor).  It was my my therapy; it was cathartic.”

“Bruce has written a lot about people like my parents and found a whole lot of beauty in otherwise invisible people’s hopes and dreams – their struggles and their losses.”

In an statement, Brandon Flowers revealed how the the partnership with Springsteen happened:

“February 29, 2020
JFK terminal 2
Destination: Salt Lake City, Utah”
“I’m a little more anxious than usual about tonight’s flight. Universal just sent out an umbrella email to all artists: “Continue promotion AT YOUR OWN RISK.” There’s a new virus going around, and it’s shutting down the promotional run for our latest and greatest — Imploding the Mirage. We’re dead proud of the record and can’t wait for the world to get a load of it. But what was meant to be a rocket launch, stadium shaking, saliva-inducing tour run was about to come to a screeching halt.”
“There’s plenty of time before boarding, so I get a burger at Wendy’s and call Tana. She’s excited to get her husband home early. And I have to be honest, I’m a little relieved to be getting home early myself.”
“Around the time I find my gate, I start getting some texts from a number I don’t have marked in my phone. “Watching Glastonbury. You guys have become one hellacious live band my brother! Love the gold suit! We gotta do Dustland one day.” Signed off with: “Bruce.”
“Now I’ve got 3 options here:”
“1. Some cold-blooded monster is playing a cruel trick on me.”
“2. It’s Bruce Hornsby. But I haven’t talked with him since 2015ish.”
“Or”
“3. It really is Bruce Springsteen (I forgot to put both Bruce’s numbers in that phone).”

“So I google the area code. It’s from Freehold, New Jersey, and I’m still not convinced. So I text Evan (Bruce and Patti’s son who has become a buddy of mine) and get verification that the number really is coming from his old man.”
“And then, Covid Happened. We were sorry that we didn’t get to tour it, but genuinely happy that we were able to release Imploding the Mirage as some sort of consolation. This is what we do, and this is what we have to offer. A joyful record about unity and perseverance. Our interpretation of that promised light that lives just beyond the boundary of sorrow.”
“I have always sought to find and reflect that elusive light in my songs. It’s a trait I inherited from my mother Jean. She died from a brain tumor back in 2010 at the age of 64… Sixty Four! I’m turning 40 next week and I’m starting to realize just how young that is. Too young. She was married to my father Terry for 44 of those years.”

“Dustland was written in the middle of her battle with cancer. It was an attempt to better understand my dad, who is sometimes a mystery to me. To grieve for my mother. To acknowledge their sacrifices and maybe even catch a glimpse of just how strong love needs to be to make it in this world. It was my therapy. It was cathartic.”
“That’s where Bruce comes in. Before I really became a fan of his, I was in the business of stadium-size everything. Larger than life EVERYTHING. Certainly larger than the lives of Jeannie and Terry Flowers. But Bruce has written a lot about people like my parents and found a whole lot of beauty in otherwise invisible people’s hopes and dreams. Their struggles, and their losses.
I’m grateful to him for opening this door for me. I’m grateful to my parents for their example to me. Now go find something new out about your dad, give your mom a big hug, and for god’s sake listen to Bruce Springsteen.”
Continue Reading
You may also like...
Related Topics:brandon flowers, bruce springsteen, CLASSIC ROCK, Featured, news, pop rock, the killers