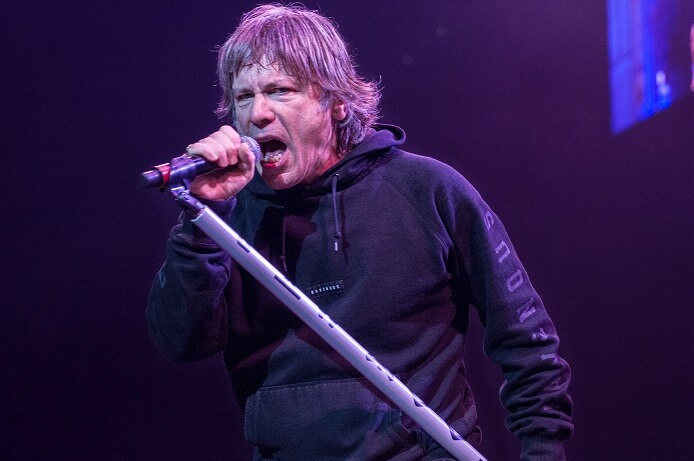 In a recent interview with Andrew Haug, Bruce Dickinson talked about his health nowadays, after beating cancer a few years ago.

Talking about surviving cancer, we know that your approach to life is – not even just, ‘take it by the horns’ but, ‘put it on high speed as well.’ How much of that experience has accelerated your learning curve to do more things? Has that given you a bit more of an extra lightning bolt?

“Yeah, I mean, perhaps subconsciously. It’s not a conscious thing, but even before I got diagnosed, I had several projects on the go and then when I got diagnosed with cancer I was like, ‘Oh no, no. Really? You’re kidding me.’

“There was a half of me that was like, ‘Well I suppose you might die, but the chances are that you won’t – but what a pain in the ass this cancer is.’

“I just had to settle down and go, you know, ‘I’m not going to give up on these things.’ I’m just going to have to put myself in the deep freeze a little bit for a few months while I nail this thing.

“The treatment is pretty aggressive so hopefully, you come out the other side of the treatment in a reasonable shape.

So everything is pretty much in the clear now. You haven’t had any ill repercussions? Obviously, I believe you get regular check-ups?

“This coming May, it’ll be four years since I was given the all-clear, so now I just go back every six months to my specialist and get a checkup.

“I have to keep having my cure looked at for various reasons to do with radiation.

“Because when you do that amount of radiation, the lower jaw, the mandible, the bone basically doesn’t like it, and it kind of permanently, effectively – all the soft tissues, they regenerate, but the bone, sadly, once irradiated, doesn’t respond very well.”