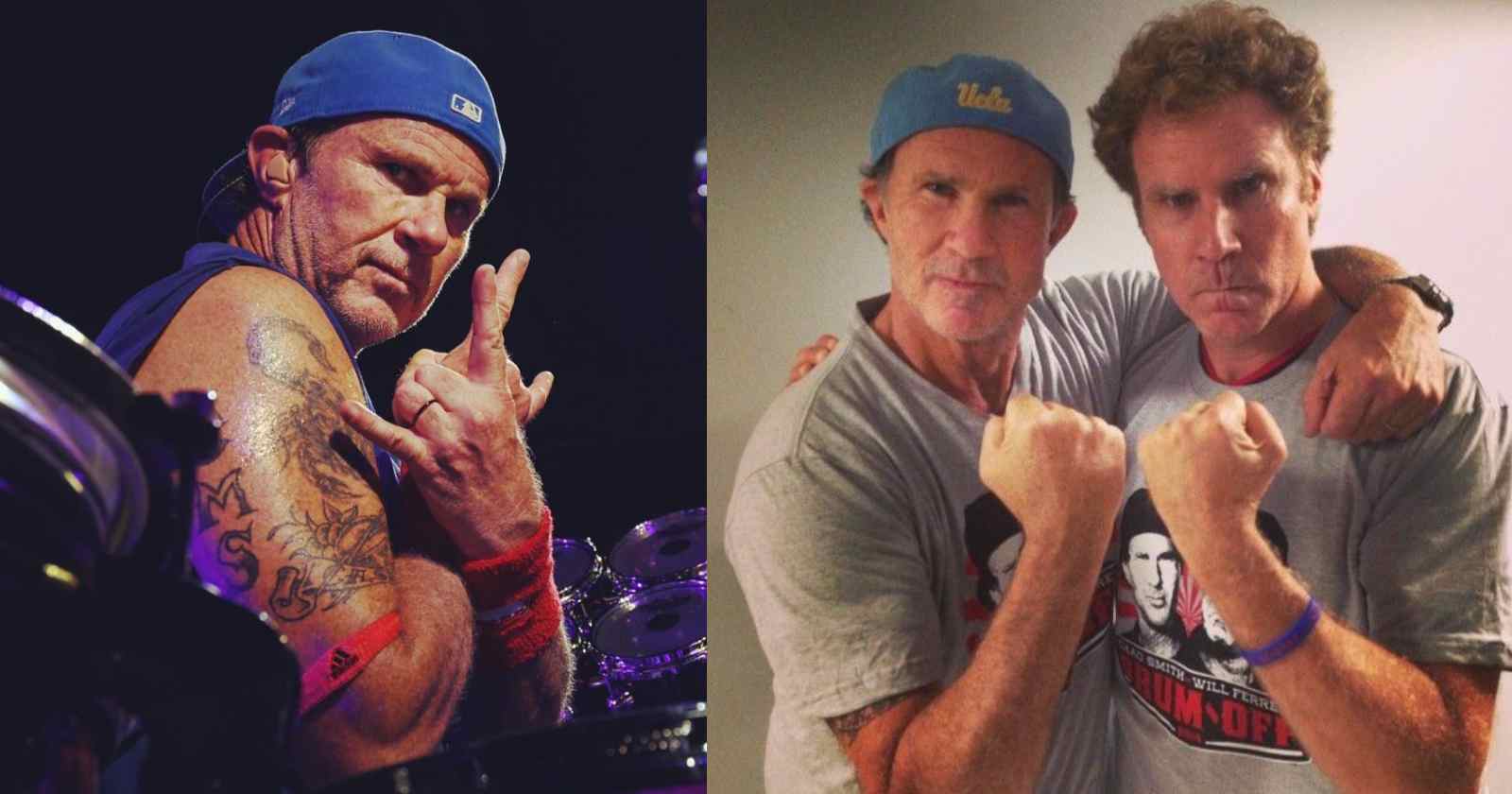 Red Hot Chili Peppers drummer Chad Smith who also played in the supergroup Chickenfoot, is one of the most important drummers in Rock music from the 90s and 00s. The musician influenced influenced a whole new generation of drummers specially with the group’s funk beat. In an interview with Rhythm’s magazine back in 1999, when the group had just released they smash hit album “Californication”, Smith listed 6 drummers that influenced his playing.

According to Rhythm’s magazine, Chad Smith said that John Bonham (Led Zeppelin), Mitch Mitchell (Jimi Hendrix), Ringo Starr (The Beatles), John Densmore (The Doors), Neil Peart (Rush) and Buddy Rich, that according to him was “the greatest drummer in the world”,  were his main influences.

Smith said in the same interview admited that he borrowed many drum parts from his influences and said it was ok: “Oh I steal loads of stuff. So go ahead and steal from me if there’s anything I do that you like. Everyone has their own personality that comes through on the drums. So it’s never going to sound exactly like me when you play it anyway ”

“I’d love to have had the chance to chat with Jimi Hendrix. He is the coolest musician of all time, if you ask me. And then I’d like to have gone out and partied with Keith Moon and played drums with John Bonham, probably have partied with him too, actually,”

In an interview with Classic Rock back in 2016, Chad Smith paid tribute to the late Led Zeppelin drummer and revealed that he was an influence at a very early age, when he was about 10 years old and was stil learning to play the drums.

“It was the sheer power of Bonzo that appealed to me. And his sound! I’d never heard drums with that sound; Page’s production was important of course. Bono had depth and air, and he played so musically. The way he played around those Page riffs with such power, musicality and finesse was very impressive.”

One of the songs Chad Smith used to play with his brother when he was a kid was Jimi Hendrix’s “Fire” but as he recalled in an interview with Music Radar back in 2015, he didn’t knew how to play well enough at the time: “I didn’t play that like Mitch Mitchell. I played it like a total hack, the same fill every time. A recording of that is on my DVD, from the Elks Club, 1972. It’s so bad. It’s really horrible. I take any feeling out of it.””

The Beatles were inducted into the Rock and Roll Hall of Fame as a band in 1988 but Ringo Starr only was inducted by his solo career in 2015. At the time the Rock Hall invited many famous drummer to play Ringo’s drum kit and share their opinion on the Beatle.

One of them was Red Hot’s Chad Smith who said while playing the kit: “He would lead with his left hand, which most right-handed drummers, when you go around the drums you kead with your right hand and there is a different sound to it,a different feel to it.” He also said that many producers often say to a drummer when he is making a record “what would Ringo do?”

“He really had a knack for coming up with really interesting musical parts that became rhythmic hooks. He has the magic touch”.

Born in Los Angeles, California back in 1944, John Densmore has appeared in every recording made by the group with drumming inspired by World Music, Jazz and Bossa Nova combined with Rock and Roll. Densmore’s drumming influences included hard jazz figures Elvin Jones (drummer for John Coltrane), whom he referred to as his idol mand Art Blakey.

“If we were playing “fuck, marry, kill,” then it would be I’d probably marry Neil. [Sighs] Ah, I couldn’t fuck or kill either of those guys. Plus, they’re both dead. That’s not fair.”

Chad Smith was part of the Buddy Rich Memorial concert back in 2008 that also had Neil Peart, Terry Bozzio, Will Lee and Jeff Berlin. Buddy Rich is considered one of the most influential drummers of all time, he was was born and raised in Brooklyn, New York, United States. He discovered his affinity for jazz music at a young age and began drumming at the age of two. He began playing jazz in 1937, working with acts such as Tommy Dorsey, Count Basie, and Harry James.

From 1942 to 1944, Rich served in the U.S. Marines. From 1945 to 1948, he led the Buddy Rich Orchestra. In 1966, he recorded a big-band style arrangement of songs from West Side Story. He found lasting success in 1966 with the formation of the Buddy Rich Big Band, also billed as the Buddy Rich Band and The Big Band Machine.