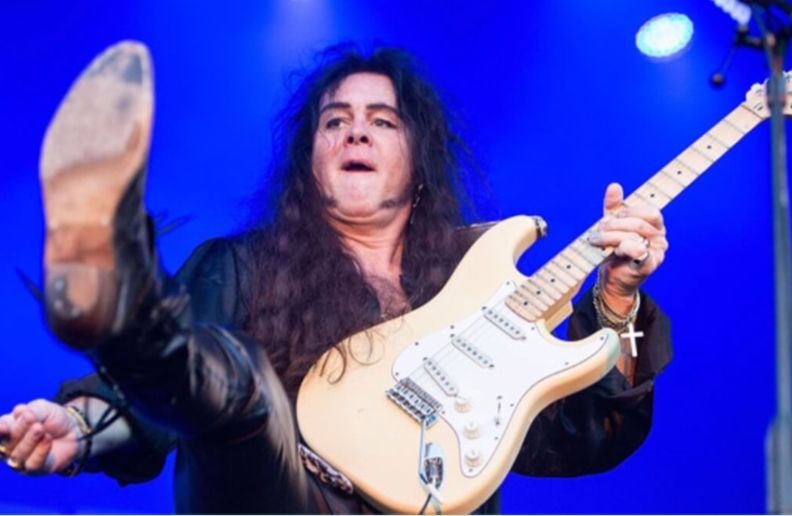 In an interview with Eon Music, the guitar virtuoso Yngwie Malmsteen talked about people that criticize him for his style.

“Some critics go; ‘The Malmsteen guy, he plays the same style, he’s never changing anything: he always does the same thing.’

“And I’m, like, I laugh at that, first of all, because what I do, and what I’ve been doing the last 30-something years, is more varied, and more wider than almost anybody else in rock ‘n’ roll.

“Bands that I love – now, don’t get me wrong because I love them, so I don’t use this as a negative; I love AC/DC, I love ZZ Top, I love a lot of bands – they have a sound that they have done the same thing for 40 years.

“So, to me, to say that it all sounds the same, that’s an idiotic comment, first of all, because if someone has a certain style, that’s actually a really good thing.

“If you’re Madonna, you have to do a fashionable record every time you put one out, because it’s not really a stylistic thing, it’s a fashion thing. Where it’s like, I can be proud to say that I have a style that I created that makes music to me.

“So, at the same time, whenever I do something different – like I did an acoustic album about ten years ago, and other projects like the symphonic thing and so on – nobody notices.

“This [upcoming blues-driven album ‘Blue Lightning’] is just another thing that I wanted to do, and of course, Mascot was instrumental in making it happen this time, just for now.

“But, I wouldn’t do it if I didn’t want to do it. Also, I think it’s cool to do something like this, and then of course, my style is not going anywhere.

Touching on what you’re saying about your style, a lot of that opinion – both positive and negative – is based on your technique; a lot of people fail to hear or notice how good your vibrato, phrasing, and feel is.

“Yeah, I think maybe people are very short-sighted, and that’s just the way people are. I learned to live with that a long time ago.

“You got to understand that before – I mean 37 years ago – I came to the States I was struggling in all sorts of ways because I wasn’t trying to be commercial sounding or anything like that.

“The vein of music that I did was extremely heavy, extremely fast, extremely complicated.

“If you heard some of the demos that I did in ’79 or ’80, it was basically pretty fucking extreme: and so a lot of people go, like, ‘This guy will fuckin’ never make it,’ they were always laughing; I’ve heard shit like that all my life it seems.”

But you did make it.

“I have something inside of me that told me this is what I’m meant to do and I gotta stick with this.

“I was tempted, as I was asked to join a couple of bands that had a record contract, and I almost went with a couple of generic fuckin’ cookie-cutter fuckin’ metal bands, and I said, ‘No, I’m not doing it.’

“Then I eventually ended up joining a cookie-cutter band Steeler anyway, so there you go! [Laughs]

“I’ve always been very, very focused in one way – this is what I’m gonna do, and no one is gonna tell me any different. So, I think that’s one of the reasons maybe why I’m still doing this.”

Basically, you’ve stuck to your guns.

“Yeah, exactly. I’m doing it because I really believe in what I’m doing, I do. It feels like it’s the right thing, this is my natural way of doing things. I mean, if you told me to do this, this and this: I could do that.

“It wouldn’t be a problem for me to do that: but, I wouldn’t do it, because it’s not my thing. That goes in every aspect: how I do the shows, how I do my lighting and my smoke, and the fuckin’ pyro or whatever. And my Marshall walls: everything is done because that’s what I want to do.”

Eddie Van Halen threw the guitar-playing genre on its head, and four or five years later you did the same, inspiring a completely new generation of players; does imitation get to you, or do you find it flattering?

“I used to get a little bit ticked off about it to be honest with you, because in the beginning when I first came on the scene in like, very early on, in ’84, ’85, ’86, there was like a million guitar players coming out of Shrapnel [known as the shredders’ record label] and they all sounded exactly like me!

“Then when they were asked who their influences were, they said Bach and Paganini. I used to say to myself, ‘Yeah, sure, okay; I’ll believe that when the fuckin’ cows come home!’.

“But, I really don’t mind you know, because everybody that comes out, like, for example, Hendrix influenced a million people too.”