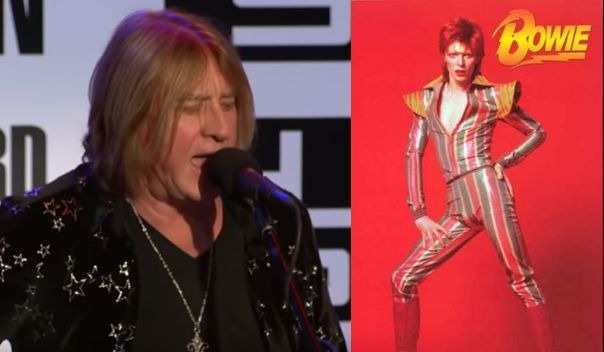 Def Leppard’s guys were on Tuesday (26) on The Howard Stern Show on American radio SiriusXM. The band spoke about their entry into the Rock And Roll Hall of Fame in a ceremony and performed live a cover of Bowie’s classic “Ziggy Stardust”.

The group commented on the experience of playing on stage with David Bowie and Queen at the 1992 Freddie Mercury tribute show at Wembley Stadium in London. Frontman Joe Elliott also recounted when he met Bowie at a barbecue at U2’s Bono’s house in 1990, and how he was forced to leave the party early to head to a restaurant and sing “Congratulations to You” to the guitarist The Edge.

“Ziggy Stardust” is a song written and recorded by David Bowie for his 1972 concept album The Rise and Fall of Ziggy Stardust and the Spiders from Mars. The song describes Bowie’s alter ego Ziggy Stardust, a rock star who acts as a messenger for extraterrestrial beings.

In 2010 the song ranked at No. 282 on Rolling Stone’s list of “The 500 Greatest Songs of All Time”. The song is one of four of Bowie’s songs included in The Rock and Roll Hall of Fame’s 500 Songs that Shaped Rock and Roll.

The character was inspired by British rock ‘n’ roll singer Vince Taylor, whom David Bowie met after Taylor had a breakdown and believed himself to be a cross between a god and an alien, though Taylor was only part of the blueprint for the character. Other influences included the Legendary Stardust Cowboy and Kansai Yamamoto, who designed the costumes Bowie wore during the tour.