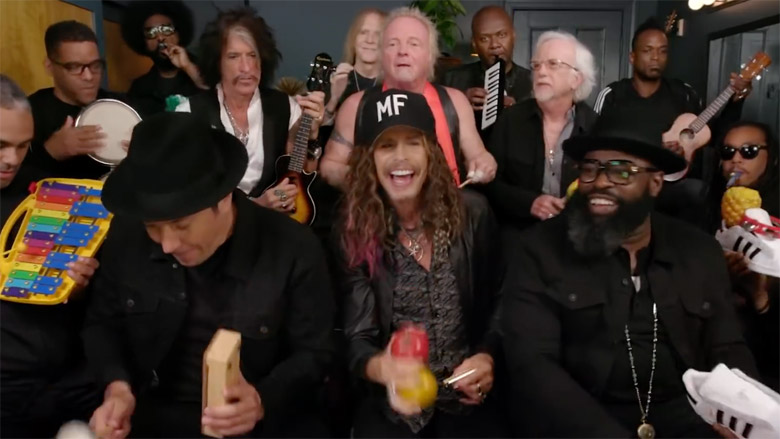 The hit “Walk this Way” by Aerosmith won a very different and entertaining version in the Classroom Instruments pack of The Tonight Show Starring Jimmy Fallon. During a tour of the band, Steven Tyler and company joined Fallon and the band Roots for a re-read of the 1975 classic.

In the video, Fallon is seated next to Tyler, while the rest of the band is behind them. Most musicians sing the lyrics of “Walk This Way,” creating a chaotic atmosphere, but the vocal is led by the frontman who is sometimes accompanied by the presenter.

“Walk This Way” is a song by Aerosmith, written by Steven Tyler and Joe Perry, the song was originally released as the second single from the album Toys in the Attic (1975). It peaked at number 10 on the Billboard Hot 100 in early 1977, part of a string of successful hit singles for the band in the 1970s.

In addition to being one of the songs that helped break Aerosmith into the mainstream in the 1970s, it also helped revitalize their career in the 1980s when it was covered by rappers Run–D.M.C. on their 1986 album Raising Hell. This cover was a touchstone for the new musical subgenre of rap rock, or the melding of rock and hip hop. It became an international hit and won both groups a Soul Train Music Award for Best Rap – Single in 1987.

The song starts out with a two measure drum beat intro by Joey Kramer, followed by the well known guitar riff by Joe Perry. The song proceeds with the main riff made famous by Perry and Brad Whitford on guitar with Tom Hamilton on bass. The song continues with rapid fire lyrics by Steven Tyler.