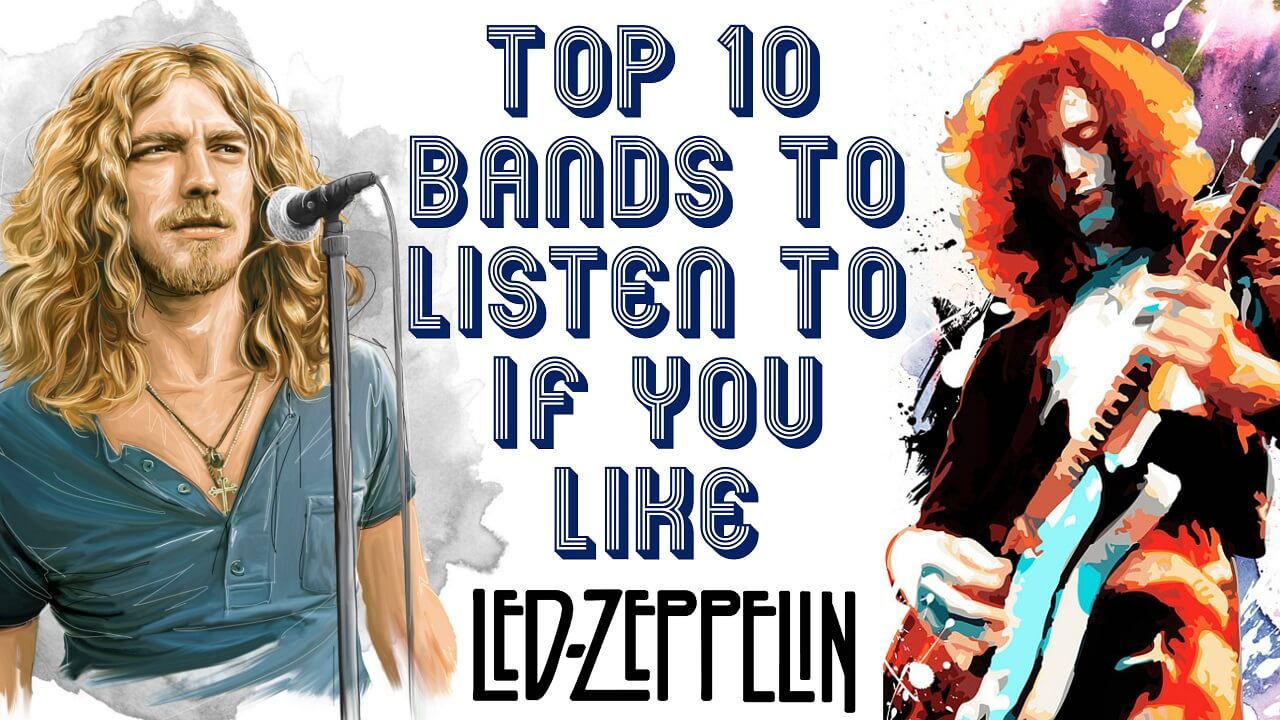 Watchmojo made a cool list of the Top 10 bands you need to listen if like Led Zeppelin and there are some really good bands there.

The top 10 Bands To Listen To If You Like Led Zeppelin:

The Black Crowes were an American rock band formed in 1989. Their discography includes eight studio albums, four live albums and several charting singles. The band was signed to Def American Recordings in 1989 by producer George Drakoulias and released their debut album, Shake Your Money Maker, the following year. The follow-up, The Southern Harmony and Musical Companion, reached the top of the Billboard 200 in 1992.

The Southern Harmony and Musical Companion (1992)

After a hiatus between 2002 and 2005, the band released Warpaint, which hit number 5 on the Billboard chart. After the release of a greatest hits/acoustic double album Croweology in August 2010, the band started a 20th anniversary tour that was followed by an ongoing second hiatus. The band announced that they would return in early 2013 but that December they returned to hiatus status with no specific return date. They announced their break-up in 2015.

Whitesnake are a rock band formed in England in 1978 by David Coverdale, after his departure from his previous band Deep Purple. Their early material has been compared by critics to the blues rock of Deep Purple, but they slowly began moving toward a more commercially accessible rock style.

“Here I Go Again” by Whitesnake

The band’s 1987 self-titled album was their most commercially successful worldwide, and contained two major US hits, “Here I Go Again” and “Is This Love”, reaching number one and two on the Billboard Hot 100. The album went 8 times platinum in the US.

And the band’s success saw them nominated for the 1988 Brit Award for Best British Group. Slip of the Tongue (1989), was also a success, reaching the top 10 in the UK and the US, and received a platinum US certification. The band split up shortly after this release, but had a reunion in 1994, and released a one-off studio album, Restless Heart (1997).

Royal Blood are an English rock duo formed in Brighton in 2013. The band’s sound is reminiscent of and rooted in modern blues rock, hard rock, garage rock, stoner rock and psychedelic rock. Their first album Royal Blood was released in August 2014.

The band  consists of lead vocalist and bass guitarist Mike Kerr, born on 19 June 1990, and drummer Ben Thatcher, born on 12 February 1988. The pair are from West Sussex: Kerr grew up in Worthing, while Thatcher is from Rustington. They first met around 2005 when they were teenagers, and for a brief period they were part of the same four-piece band called Flavour Country in which Kerr played keyboards and the keytar.

The band’s sound, rooted in rock and country, is often experimental and psychedelic. The group amassed a following beginning in the 2000s in part due to their live performances.

“Wordless Chorus” by My Morning Jacket

The group first found success in Europe after the release of its debut album, The Tennessee Fire (1999). Its next release, At Dawn (2001), led to a large stateside following and preceded several lineup changes. After signing to major label ATO Records, the group released two albums, It Still Moves (2003) and Z (2005), with the latter representing a critical breakthrough.

The group’s next release, Evil Urges (2008), was more polarizing for fans and critics, while Circuital (2011), its sixth album, saw a more measured response. After many years of side projects and touring, the band’s seventh album, The Waterfall, was released in 2015.

The Black Keys are an American rock band formed in Akron, Ohio, in 2001. The group consists of Dan Auerbach (guitar, vocals) and Patrick Carney (drums). The duo began as an independent act, recording music in basements and self-producing their records, before they eventually emerged as one of the most popular garage rock artists during a second wave of the genre’s revival in the 2010s. The band’s raw blues rock sound draws heavily from Auerbach’s blues influences, including Junior Kimbrough, Howlin’ Wolf, and Robert Johnson.

Friends since childhood, Auerbach and Carney founded the group after dropping out of college. After signing with indie label Alive, they released their debut album, The Big Come Up (2002), which earned them a new deal with Fat Possum Records. Over the next decade, the Black Keys built an underground fanbase through extensive touring of small clubs, frequent album releases and music festival appearances, and substantial licensing of their songs.

“Gold On The Ceiling” by The Black Keys

Their third album, Rubber Factory (2004), received critical acclaim and boosted the band’s profile, eventually leading to a record deal with major label Nonesuch Records in 2006. After self-producing and recording their first four records in makeshift studios, the duo completed Attack & Release (2008) in a professional studio and hired producer Danger Mouse, a frequent collaborator with the band.

The group’s commercial breakthrough came in 2010 with Brothers, which along with its popular single “Tighten Up”, won three Grammy Awards. Their 2011 follow-up El Camino received strong reviews and peaked at number two on the Billboard 200 chart, leading to the first arena concert tour of the band’s career, the El Camino Tour. The album and its hit single “Lonely Boy” won three Grammy Awards. In 2014, they released their eighth album, Turn Blue, their first number-one record in the US, Canada, and Australia.

Wolfmother released their self-titled debut album Wolfmother in Australia in 2005 and internationally in 2006. The album reached number 3 on the Australian Albums Chart and the top 40 in the US and the UK, and has to date sold over 1.5 million copies worldwide.

“Joker And The Thief” by Wolfmother

Ross and Heskett left the band in 2008. Stockdale returned with a new lineup featuring Peres, rhythm guitarist Aidan Nemeth and drummer Dave Atkins in 2009, releasing Cosmic Egg later in the year. The album reached number 3 in Australia and the top 20 in the US.

After more personnel changes, the group’s planned third album was released in 2013 as Keep Moving, a Stockdale solo album. Later that year, Wolfmother returned as a trio featuring Peres and drummer Vin Steele for 2014’s New Crown. The band’s fourth album, Victorious, was released in 2016.

The White Stripes were an American rock duo formed in 1997 in Detroit, Michigan. The group consisted of Jack White (songwriter, vocals, guitar, piano, and mandolin) and Meg White (drums and vocals). After releasing several singles and three albums within the Detroit music scene, The White Stripes rose to prominence in 2002, as part of the garage rock revival scene.

Their successful and critically acclaimed albums White Blood Cells and Elephant drew attention from a large variety of media outlets in the United States and the United Kingdom. With the single “Seven Nation Army” and its guitar line becoming their signature song. The band recorded two more albums, Get Behind Me Satan in 2005 and Icky Thump in 2007. They dissolved in 2011 after a lengthy hiatus from performing and recording.

The White Stripes used a low-fidelity approach to writing and recording. Their music featured a melding of garage rock and blues influences and a raw simplicity of composition, arrangement, and performance. The duo were also noted for their fashion and design aesthetic which featured a simple color scheme of red, white, and black. Which was used on every album and single cover the band released—as well as the band’s fascination with the number three.

is an American rock band formed in 2012. The band members are Josh Kiszka, Jake Kiszka, Sam Kiszka, and Danny Wagner. In April 2017, the band released their debut studio EP, Black Smoke Rising. The debut single, “Highway Tune”, topped the Billboard US Mainstream Rock and Active Rock Rock stations in September 2017. A second release, the double EP From the Fires, containing the four songs from Black Smoke Rising and four new songs, was released on November 10, 2017.

“Get It On” by Kingdom Come

Frank was also at one point the keyboard player for Josie Cotton. Kingdom Come marked the first band where Wolf sang without playing guitar. The frontman later admitted that, for a while, it was a very awkward adjustment.

“No One Knows” by Queens Of The Stone Age

Formed after the dissolution of Homme’s previous band, Kyuss, Queens of the Stone Age developed a style of riff-oriented, heavy rock music. Their sound has since evolved to incorporate a variety of different styles and influences. Including working with ZZ Top member Billy Gibbons, Nirvana drummer and Foo Fighters frontman Dave Grohl, and steady contributor Mark Lanegan.