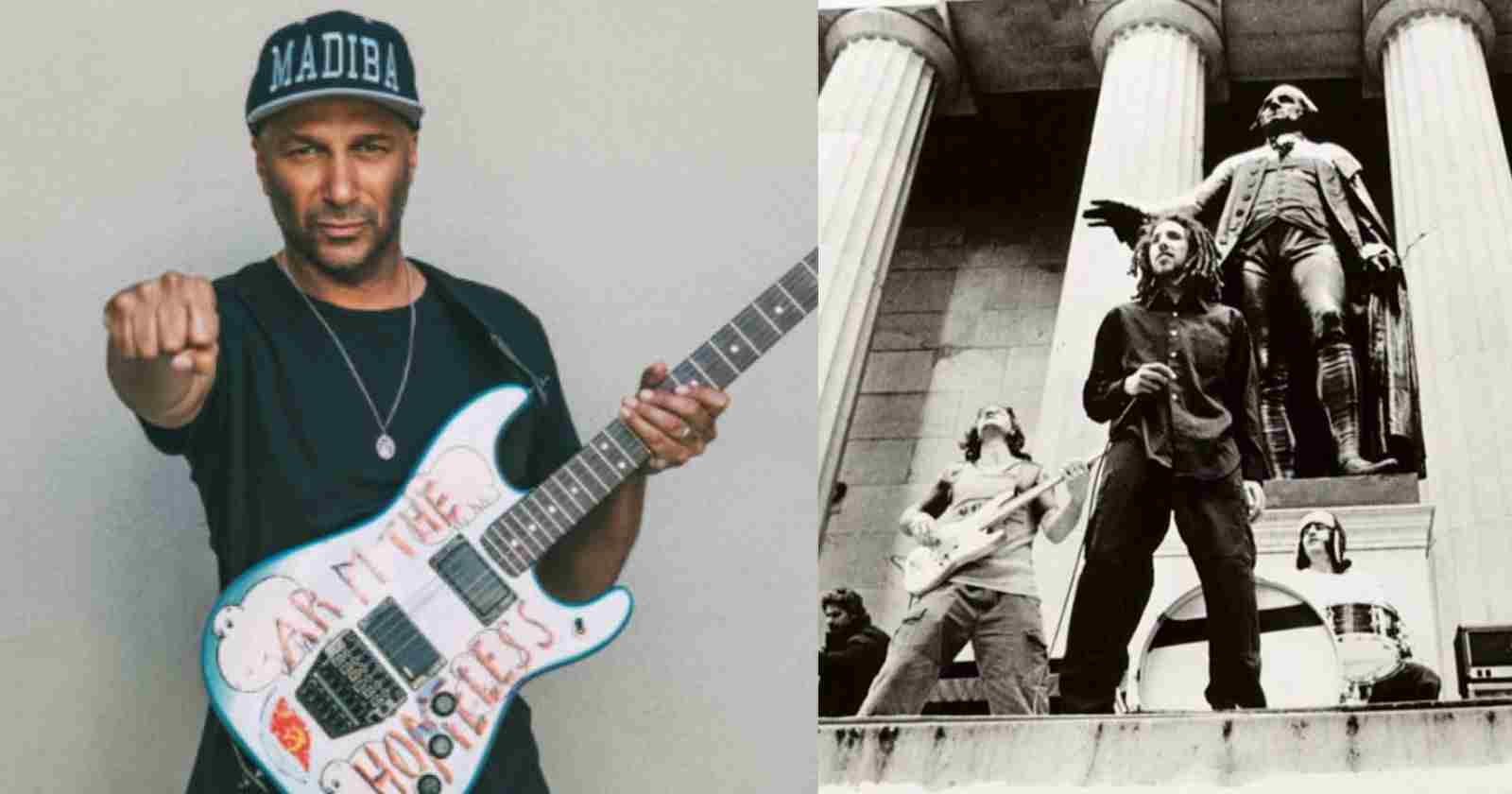 Rage Against the Machine guitarst Tom Morello recalled when the band cause the shutdown of Wall Street stock exchange for a day when they recorded with Michael Moore the video for “Sleep Now In The Fire”. The musician also talked in the interview with Interview Magazine about the signs on the video that predicted Donald Trump’s election.

Tom Morello said about when Rage Against The Machine caused the shutdown of Wall Street stock exchange:

“Michael Moore is now a close friend, but at the time, we had never met before. And this is a tale that I relate in great detail in the Audible thing, where the one question I couldn’t wait to ask him, given his very provocative art, was, ‘How many times have you been arrested?’ And he said, ‘Never.’ And I jokingly said, ‘Well, you’ve never worked with Rage Against the Machine.’

“So we’re on the steps, and we’re performing, and it’s going well. And then he says, ‘OK, now we’re going to play on the sidewalk, the un-permitted sidewalk.’ And so, we get down on the sidewalk, and the police sergeant comes up to me and he’s like, ‘You guys got to get back up on the steps.’

“Now, when you’re making a video, you’re miming along to a playback, so we’re miming along to ‘Sleep Now in the Fire,’ and I remember what Mike said, so I’m like, ‘Something’s happening. I’m going to keep playing.’ And then he’s like, ‘Get back on the fucking steps right now,’ Tom Morello said.

And he’s mad. The cop vein in his neck begins to pulse. And then he unplugs my guitar, and the riff keeps playing. And then he unplugs Timmy’s bass and takes Brad’s drumsticks. The look on his face is one of religious terror. He doesn’t understand how the song is happening. So he arrests Michael Moore.”

“And I’m the first one through the door, and there’s a security guy in a frumpy coat. I’m like, ‘Hey, I’m here to take the New York Stock Exchange. Is that a left or a right?’ And he hits the button and the riot police come, and the doors slammed down, and it shut down the New York Stock Exchange in the middle of the Tuesday afternoon for the first time in its 200-year history,” Tom Morello said.

“In retrospect, it felt like a historic victory against evil, but on the day, it felt so chaotic because our director was in jail. We were supposed to film a video that day, and we’re like, ‘We’ve lost the director. Well, we did sort of shut down the Stock Exchange, but do we go back to the hotel?’ But at the end of the day, it was a pretty spectacular historic rock and roll thing we made. They don’t make them like that anymore.”

In your video for ‘Sleep Now in the Fire,’ there’s a guy holding up a ‘Trump for President’ sign. Would you say, in some sense, that Rage Against the Machine predicted all this?

“I would say that we are karmically entirely responsible, and my apologies.”

What’s the story behind that?

“Michael Moore [who directed the video] just printed up some placards and handed them out to day-traders who just walked around with them. No one paid any attention to it. It’s funny how that became an offhand joke – ‘offhand joke’ would be a good hashtag for 2020,” Tom Morello said.