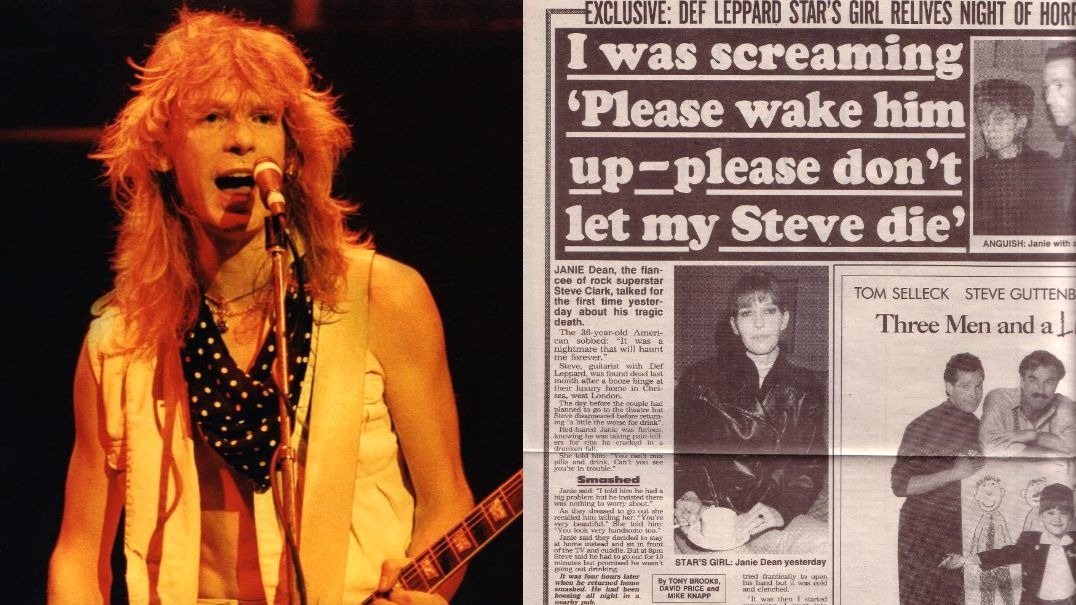 Stephen Maynard Clark (23 April 1960 – 8 January 1991) was an English musician. He was the principal songwriter and lead guitarist for the British hard rock band Def Leppard, until 1991, when he died from alcohol poisoning. In 2007, Clark was ranked No. 11 on Classic Rock Magazine’s “100 Wildest Guitar Heroes”. In December 2018 it was announced that Clark would be inducted into the Rock and Roll Hall of Fame as a member of Def Leppard.

At the time of his death, Clark was on a six-month leave of absence from Def Leppard.

On Tuesday 8 January 1991, Clark was found dead on his couch by Janie Dean, his girlfriend. He was 30 years old. The postmortem revealed that the cause of death was accidental, due to a compression of the brain stem causing respiratory failure. This respiratory failure was caused by a lethal mixture of alcohol and prescription drugs.
The postmortem also found that Clark had a blood alcohol level of .30 as well as the presence of morphine. No evidence of suicidal intent was discovered. Daniel Van Alphen, Clark’s drinking companion the night before, testified that they went to a local pub and returned to Clark’s home at midnight to watch a video.

He was buried at Wisewood Cemetery located in Loxley, Sheffield, near the Clark family estate.

Tesla, who opened for Def Leppard on the Hysteria tour, recorded a tribute to Clark entitled “Song & Emotion (To Our Friend, Steve ‘Steamin’ Clark)” for their album, Psychotic Supper.

Before joining Def Leppard in 1978, Clark played cover songs with his small band, Electric Chicken, in Sheffield. Around that time, he met Pete Willis (Def Leppard’s original guitarist and founder) at a technical college.

Willis spotted Clark reading a guitar book and asked if he played. He then invited Steve to come and audition for his band, as they were looking to add a second guitarist. Clark never showed up, but when Willis and singer Joe Elliott bumped into Clark again at a Judas Priest gig, Willis re-issued his invitation.

Clark finally came down to their rehearsal room and joined Def Leppard in January 1978. According to Elliott in Behind the Music, Clark auditioned for Def Leppard by playing all of Lynyrd Skynyrd’s “Free Bird” without accompaniment.