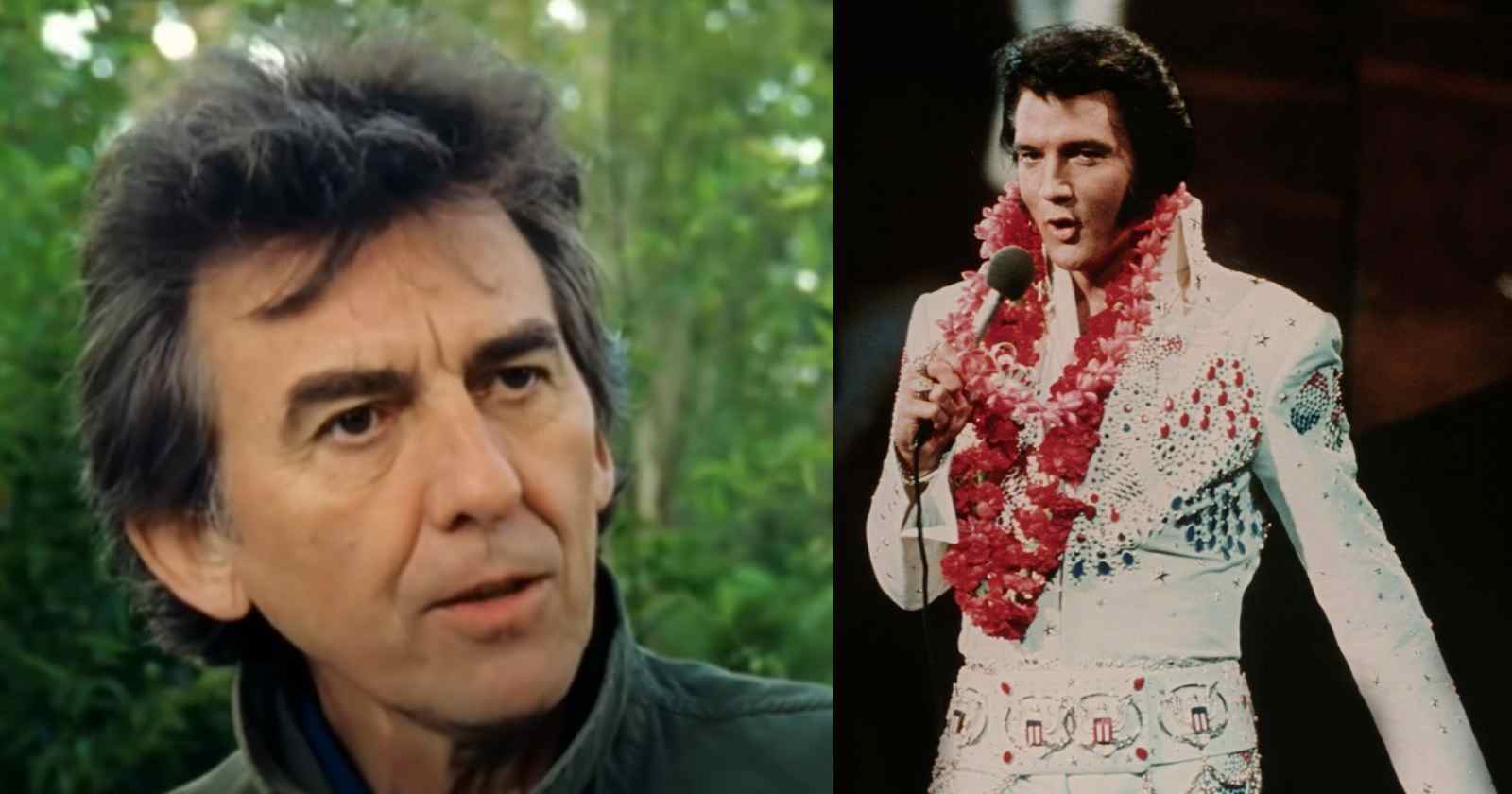 Also known as the King Of Rock and Roll, Elvis Presley was a huge influence to many musicians around the world that would also become huge stars, like The Beatles. The group had the chance to meet the American musician in the 60s and the late guitarist and singer George Harrison was lucky enough to see Presley once more in the early 70s as he recalled in interviews over the years. Their last meeting happened 5 years before Elvis’ death in 1977 at the age of 42 victim of a heart attack.

The first time Harrison met Elvis was alongside Paul, John and Ringo at the king’s house in Bel Air, Los Angeles in 1965, when The Beatles went there and spent a whole evening with him. “When we arrived at his house, he was sitting on a couch, watching TV, playing a Fender bass,” the British musician told Creem Magazine back in 1987. According to George there were also in the house a few friends of Elvis, his manager Colonel Tom Parker, The Beatles’ manager and roadies.

“He was really nice and he was charming. It was a big thrill for us, meeting him—especially because… well, we looked forward to it. But it was probably up on Mullholland Drive, which goes around and around and around. We were in the dark, in the back of this limo. And we used to smoke these herbal cigarettes in those days. We had a couple of those and we had the giggles, going into hysterics. Then we totally forgot where we were going or what we were doing,” Harrison said.

The second meeting in the 70s

The second and last time that George Harrison saw Elvis Presley face to face was in 1972 as he also told Creem Magazine. The Beatle went to watch the king’s concert at the Madison Square Garden in New York City. “At that time, I had my uniform; the worn-out denim jacket and jeans. I looked like a rag-man I had a big beard, moustache and long hair down to my waist.”

“They took me back in the intermission to meet Elvis again and he was in the back of the dressing room. The big rooms with the showers for the footballers and stuff. I was in the front part just talking to some of the guys. I’m sitting there, thinking ‘Well, where’s Elvis, then?’ Finally he came out of the back and he was… immaculate. I felt like this real grubby little slug. He looked like Lord Siva or something.”

“He seemed to be about eight feet tall and his hair was black and his tan was perfect. He had this big white suit, a gold belt about four feet wide and he was towering above me. I just put a hand out (cowers) and said ‘Hello, Elvis, how are you?’ Just cowering like this little rag-man. I wanted to say to him, ‘Why don’t you just come out in your jeans and your black shirt—get rid of all them horrible women singers in your band, all them horrible trumpet players and just have James Burton and the drummer and the bass player and the piano player?’

‘Just come out and do ‘That’s All Right, Mama.’ But instead he came out and did (sings) ‘I did it myyy wayyyy.’ Oh, Jesus. But we all loved Elvis and it was sad to see what happened to him. We still love him and he’s still there in his spirit and in his music and best of luck to him. That’s what I say,” George Harrison said.

In an interview for The Beatles Anthology (Transcribed by Rock and Roll Garage) back in 1995, Harrison talked about that meeting again, saying: “I met him in Madison Square Garden when he was just, I suppose a couple years before the end. It’sad, it was like he had all them squawking girls singers, trumpet players, all that stuff. But he had a great rhythm section: James Burton and that gang. I just wanted to say to him ‘just get your jeans on and get your guitar and just do ‘That’s Alright Mama’ and bugger all that other crap. When I saw him, I was like a hippie, I had all this denim and I had long hair.”

“It was in the early 70s and I went backstage to meet him. Those big dressing rooms, miles of toilets and stuff. So I was talking to the guys again and he was nowhere to be seen. Then finally he came around the corner. He had that big white outfit with all gold things and big belt buckle. He looked like Ringo, all his beard had varnished.”

“All his hair was black and he was all tanned. I thought I was meeting Vishnu, Krishna and I was just like ‘Wow…’. I felt just like this little snotty grubby little ‘hello, Elvis. How are you?’ He was like ‘Hey!’ George Harrison said.