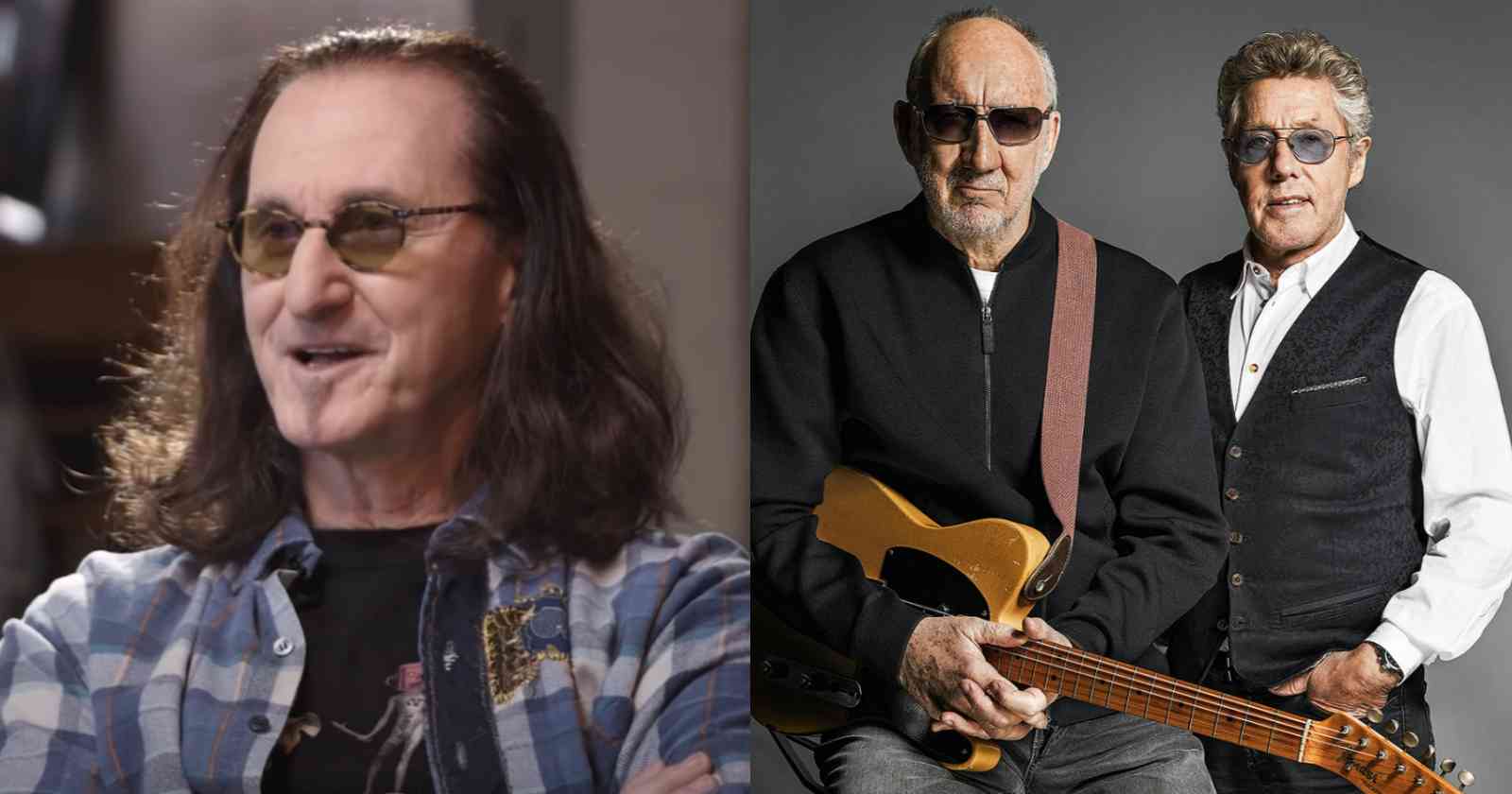 Born in North York, Ontario, Canada back 1953, Geddy Lee first achieved fame as the vocalist, bassist and keyboardist of Rush, one of the most successful Canadian bands of all time. The group founded in 1968 became an important part of Rock and Roll history with their sound that mixed Progressive Rock with Hard Rock music.

Lee was influenced by many bands in his youth but one of the most important ones for him was The Who. Rock and Roll Garage selected the 4 The Who songs that Geddy Lee said over the decades that are some of his favorites of all time.

Talking with Rolling Stone back in 2019, Geddy Lee chose some of his favorite “Bass Songs” and one of them was “My Generation”, one of the first hits from The Who. “Seriously? A Pop song with bass solos? John ‘The Ox’ Entwistle was arguably the greatest rock bassist of them all. Daring to take the role and sound of the bass guitar, (he) push it out of the murky depths while strutting those amazing chops with his own kind of ‘Twang!’ The Ox’s playing was bold and incredibly dexterous. That right hand… Seriously?” Geddy Lee Said.

The song is the title-track of The Who’s debut album released in 1965. That record also had famous tunes like “The Kids Are Alright” and “The Ox”.

Geddy Lee had already praised that album in a conversation with Guitar World back in 2014. He revealed that he and Alex Lifeson used to play songs from “My Generation” almost everytime they would jam when they were young.

“What an amazing guitar sound on this album! And Townshend even plays a few solos, which he usually never does. Was there anybody better at expressing themselves through power chords? I just loved that record. I (also) know Alex did, too. Every time we jammed as a young band we would wind up jamming parts of that record,” Geddy Lee said

“My Generation” was named the 11th greatest song by Rolling Stone on its list of the 500 Greatest Songs of All Time. It also became part of The Rock and Roll Hall of Fame’s 500 Songs that Shaped Rock and Roll.

Another The Who song that Geddy Lee said is one of his favorites is “Magic Bus”. The musician chose the track in an interview with Sirius XM Classic Vinyl Influences show (Transcribed by Rock and Roll Garage) back in 2013.

“I think most Rock bands today wouldn’t sound the way they sound without The Who. I think they are one of the most important bands to ever come out of England. Certainly in my career the most influential in terms of songwriting.”

“Pete Townshend still is my absolute favorite Rock songwriter . (Also the) most influential in terms of what a great Rock song should be. I’ve got the chance to see them a couple of times when I was younger. Roger Daltrey aside, that’s a three-piece band really, bass, drums, guitar and vocals. Love that band,” Geddy Lee said.

Written by Pete Townshend, “Magic Bus” was released by the band as a single in 1968. It became one of their most famous tracks but at the time of the release it only reached number 26 in The United Kingdom and number 25 in the United States charts.

Talking with Classic Rock in 2020, Lee talked about songs that were the soundtrack of his life and he chose “Won’t Get Fooled Again” as the ultimate anthem. He said that “Maybe the greatest power chords ever recorded. Who invented the power chord? Probably Pete.”

In the same interview, Geddy Lee chose the album “Who’s Next” as the greatest record of all time. He explained his choice saying that it “embodies all the best things about Rock and Roll”.

Released in 1971, “Who’s Next” is one of The Who’s most famous albums. Besides “Won’t Get Fooled Again”, it has classic tracks like “Baba O’Riley”, “Bargain”, “The Song Is Over”, “Going Mobile” and “Behind Blue Eyes”.

Back in 2019, Geddy Lee made a playlist for Amazon Music of the 22 songs that inspired his bass playing consciously or subconsciously.

One of the tracks chosen was “The Real Me”, one of tracks from The Who’s classic 1973 album “Quadrophenia”. When he explained how he chose the songs for the playlist, Geddy praised the late Who bassist John Entwistle.

“I chose these songs because I’m such a ‘bass-centric dude’. That’s all I’ve been thinking about for the last few years, (what) is the role of bass in popular music. What I tried to do with my book (The Beautiful Book of Bass) was provide an alternate history of popular music through the point of view of the bass player. From the murky bottom end to the twangy top end.”

“John Entwistle, Chris Squire, they were playing the kind of music I wanted to play. So they were a direct influence on the kind of player I wanted to become. But there are others that were subconscious influences. I think we all have those when we listen to various music,” Geddy Lee said.