Talking Heads leader, David Byrne will embark on a short North American tour next year in support of a new solo album that’s expected to arrive in March.

Byrne will play six shows on the East Coast, starting March 3rd at the Count Basie Theatre in Red Bank, New Jersey and wrapping March 10th at the Ulster Performing Arts Center in Kingston, New York. The trek marks the musician’s first solo tour since 2009, though he was previously on the road with St. Vincent in support of their 2012 album, Love This Giant. Tickets for Byrne’s 2018 tour dates will go on sale December 15th. More information is available on the musician’s website. 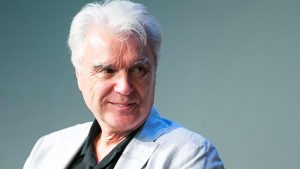 A post on Byrne’s website noted that the upcoming shows would featuring Talking Heads hits, as well as music from his forthcoming album (an exact release date and title have yet to be announced). Following the North American run, Byrne will play several festivals in South America and Europe, and the post suggested that additional festival dates would be announced soon.

Byrne also shared a personal note, in which he teased the concept for his new stage-show. The set-up, Byrne said, would be a big open space and the musicians will be equipped with wireless gear that will allow them to roam freely around the stage. In order to hide all the monitors, mixers, amplifiers and other gear, Byrne said they would use a lightweight chain instead of a regular curtain, which could’ve presented problems at outdoor venues. 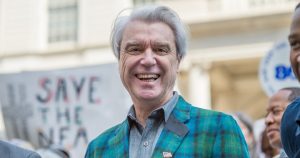 “The band and I will be testing all of this in front of a live audience during a small number of shows in the beginning of March,” Byrne said. “We’ll be doing some new songs… and many others that will, I assume, be familiar. I’m excited. This is the most ambitious show I’ve done since the shows that were filmed for Stop Making Sense, so fingers crossed.”