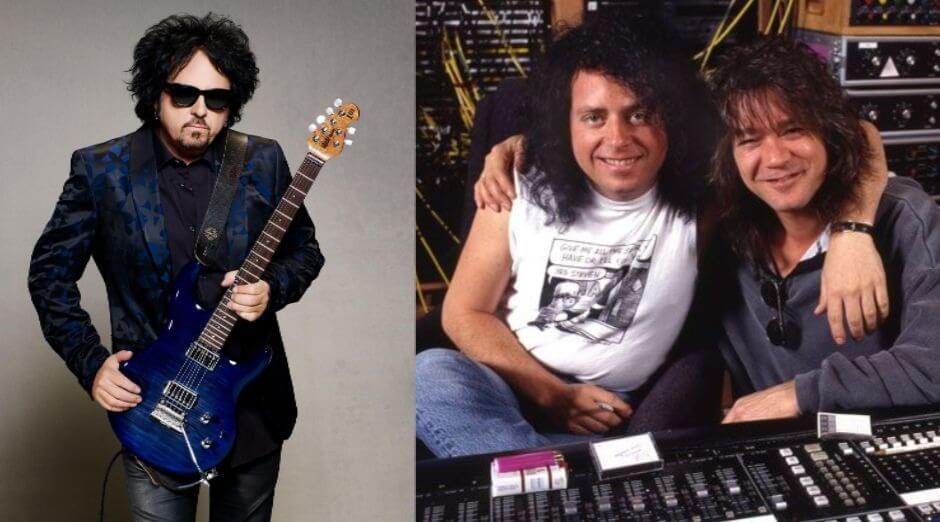 Toto guitarist Steve Lukather (Also famous for being a respected session musician) talked in an interview with Tone Talk about the claims that he played Eddie Van Halen‘s guitar parts on Van Halen album. The musician also talked about working with Michael Jackson.

“I did some background vocals [on ‘Top of the World’] – that’s all. People are still thinking that I play Eddie’s parts – yeah, that’s really funny. I mean, come on – of course he doesn’t need me to play anything like that.”

“I was there at the house. So I used to hang all the time. I love those guys. They’re like family to me. Yeah, I haven’t talked to Ed in a while. I’m waiting for a text back and I’ve got a call to Al. We keep in touch. I’m happy for all of them, I’m everybody’s friend. I’m Switzerland, man. I run into people everywhere, you have to really try hard to piss me off. You have to do something awful to me first.”

“Generally, even people that don’t like my shit, I’m like, ‘Well, that’s cool, that’s alright. I got what I wanted to do, and most people don’t. Maybe that’s why they hate me or something. Because I was lucky enough to and worked hard enough to get lucky enough to get the shot to get in. And they liked me, and I kept coming back. I’ve heard a lot of really fun things about myself, yes, people with fake names are really articulate.”

“Yeah, Jeff Porcaro had them sign that back together because they head pristine lead vocal comp and Eddie solo, first-generation, and somebody cut it. Quincy [Jones, producer] freaked out because he wanted the master, this was all tapes, so quality-wise, it mattered, the first-generation tape.”

“And Jeff, being the genius that he was, all he heard was, ‘This is Michael’s lead vocal’ – no click tracks, Michael Jackson’s hitting two and four on our drum kit. Jeff went out with a pair of drumsticks, amazingly enough, and he recreated a click track for himself to play to, and he goes, ‘OK, I got this,’ and he went out there.”

“The second one was at the record, and then I started overdubbing, I did all these wall-of-Marshall guitars because I heard Eddie’s solo and shit like this. And then nobody played bass, I said, ‘I’ll play bass on it.’ I played bass on a lot of other records, even our records, I just did it.”

Can you talk about stepping into a lead vocal role with Toto for certain songs?

“OK, you know what? I never thought of myself as a singer, I never really wanted to do it. I kind of did it by default in my younger school bands. But, you know, when they put the band together, they wanted a band full of guys that could sing, everybody could sing a tune, like the Eagles or Fleetwood Mac.”