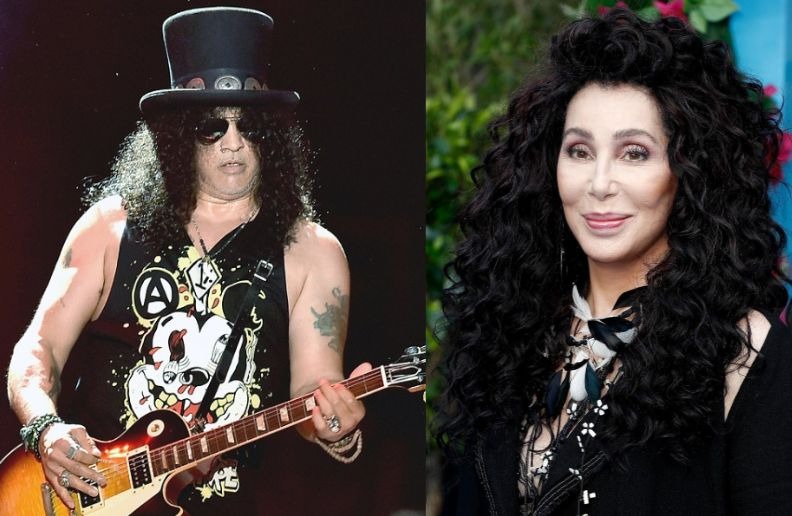 In a talk with WTF With Marc Maron, Slash talked about his cigar addiction, he was smoking 60 cigarettes a day. He revealed how Cher helped him quit smoking.

“Anyway, I couldn’t smoke. I tried – I couldn’t breathe – so I had two weeks on my back. So I quit, and then I used the patch to sort of get the edge off. Then I started doing the snus [smokeless tobacco] thing, and I was doing that for years.

“My significant other talked me out of doing it, and so I started doing the [nicotine] gum. And I sleep with the gum.”

“She [my mother] was one of those smokers that always said, ‘I’m gonna quit one day.’ But while she was in the hospital, I would literally sit with her, go outside and smoke a cigarette, come back and sit with her. And then the Cher thing happened, and that’s when I said, ‘You know what?’

“I had to leave for every song and go outside and smoke. And I think I’d worn myself down from smoking so much, and Cher just took me over the top. Every time she revisited one of those periods [during the concert]…

“She had a closet on stage and she’d go in the closet and she’d come out and she’d be Indian. Every single thing that she’s been over her career… When she started with the Sonny & Cher thing, it just killed me – I couldn’t take it. So I would smoke… I just didn’t have any fond memories of that show or any of the other stuff.”

“You’ve got these triggers all the time. They only last for maybe two seconds or so, but they’re really, really potent. And you can just get it by watching somebody smoke on TV. I saw somebody smoking at a bus stop, and I said, ‘Ohhh…’ It happens at least once a day every day.”

He described himself as a “Compulsive Smoker”

“I was in Calabasas one time. It was one of the first times I’d ever actually been there. And there’s some sort of outdoor mall-y kind of thing with a theater – it was like a pavilion of something – and I got out of the car and I lit a cigarette and I was walking wherever we were walking to through the parking lot.

“I was smoking at gigs, and I was on tour in the UK, and they told me, ‘The smoking ban’s coming.’ I said, ‘You guys are gonna have some serious problems.’ It was in Ireland. [I said] ‘You know they’re gonna riot. It’s not gonna work.’

“And so we finished the tour, and I came back maybe six months later, and they had passed this thing. And it was people sitting outside all smoking their cigarettes with their cocktails, and they were sitting on benches.

“And some hotels had put monitors outside so you could watch TV and smoke, and they just went down quietly. And it was, like, ‘Wow!’ No repercussions whatsoever – no violence, stoning or anything.

“They were trying to fine me for every cigarette I smoked on stage. So it was like, a hundred quid for every cigarette. So we had to make up a bunch of stories, and we got out of it. But I couldn’t believe it had gotten to that point.”