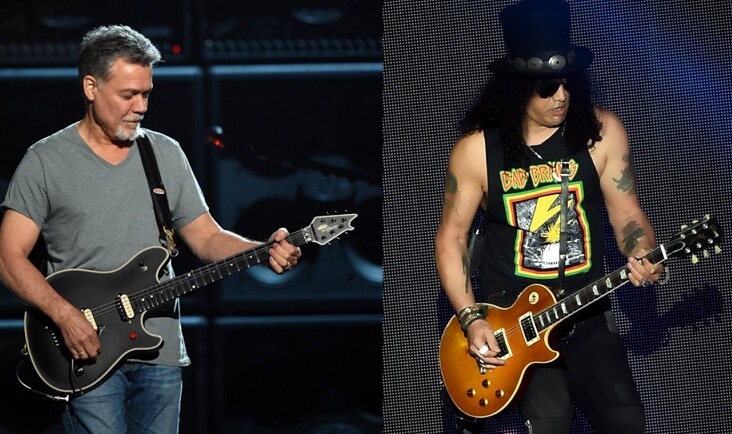 In interview on Jonesy’s Jukebox, Slash talked about his major influence on guitar, the legendary Eddie Van Halen.

“I’m a huge fan of Eddie as a person and as a player. And I loved [1978’s] ‘Van Halen’ when it first came out. That style that he did, I’ve always thought that was something that he did and nobody else did it like him. And then it became a thing. I definitely didn’t go down that road when I picked up the guitar.

“But at the same time, I was definitely influenced by him indirectly because he’s just such a great, fluid, feel player. And people don’t pick up on that part of him as much as they do all the pyrotechnic stuff that he does.

“I’ll never forget that feeling, that sort of the ’60s and ’70s kind of thing that sort of developed and developed, sort of punk rock. And everything that was happening, up to that point, it all sort of changed. And that totally brought on the hair metal thing that happened in Los Angeles, for sure.”

Eddie said that Clapton was a major influence for him…

“I think that everybody says that their biggest influence is Eric Clapton. [Laughs] When I first figured out that it was the lead guitar that I wanted to do, it was because I was watching a guy doing an Eric Clapton lick.

“He’s a blues player. The guy was playing a Cream song. I said, ‘That’s what I want to do.’ And he goes, ‘Well, that’s the lead guitar.’ But that’s what I remember, he was playing Clapton off [Cream’s 1967 sophomore record] ‘Disraeli Gears,’ whatever song it was.

“I went and saw him pretty recently, like, a couple of years ago, at The Forum [in LA]. And he’s just… Every combination of notes he does is really great. It’s not super exciting, but he’s very much an adult player.

“And he says in his own interviews, ‘I was influenced not be kids’ music but manly music.’ Because he didn’t have a dad or something. And so everything had to have a certain sort of, like a grown-up kind of thing to it.”