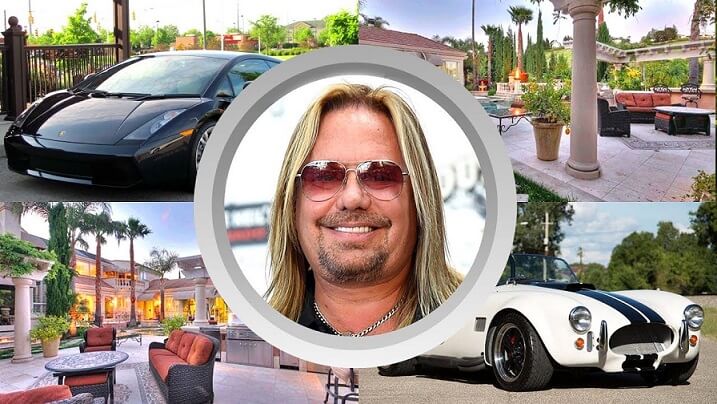 In a video made by the channel Modern Trend Life Vince Neil life is shown in details. You will find out more about his net worth, lifestyle, family, biography, house and cars.

Neil was born in Hollywood, California to Shirley (née Ortiz) and Clois “Odie” Wharton. He has Mexican ancestry on his mother’s side and Native American ancestry on his father’s.  During the 1960s, his family moved around southern California from Inglewood to Watts, before finally settling in Glendora, attending Sunflower Intermediate School and later Royal Oak High School. As well as having an interest in music while a teenager, Neil was also interested in surfing, basketball, baseball, football and wrestling.

Neil was discovered while performing with his band Rock Candy in 1979, and joined Mötley Crüe in 1980. Neil had been friends with Tommy Lee in high school. Mötley Crüe was looking for a lead vocalist at the time and were impressed by Neil after hearing him through Lee. Mötley Crüe released its first album, Too Fast for Love, in 1981.

The band then began a string of hit releases throughout the decade—1983’s Shout at the Devil, which established the band as a big act in rock and roll, 1985’s Theatre of Pain, 1987’s hit Girls, Girls, Girls, and their highest-selling album, 1989’s Dr. Feelgood—establishing the quartet as one of the biggest hard rock/metal bands of the ’80s. Following the band’s first compilation album Decade of Decadence 81-91 Mötley Crüe parted ways with Vince Neil in February 1992.