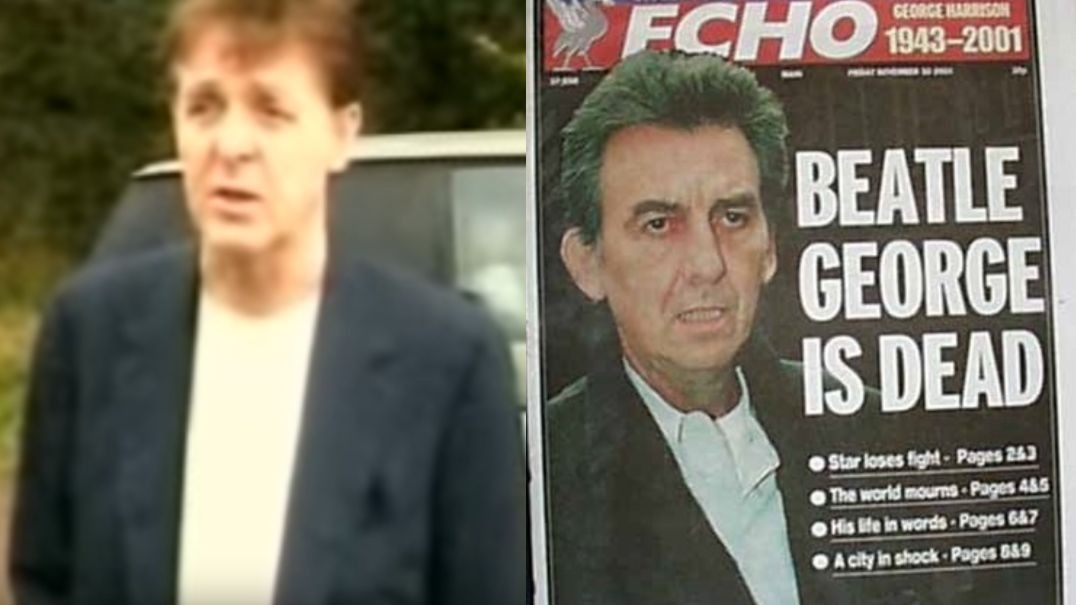 The amazing George Harrison left us too soon in 2001 at 58. The musician died from lung cancer. And the ex-bandmate Paul McCartney reacted at the time for some journalists. The video was filmed at his estate in Sussex. The reporters were gathered outside the long driveway entrance. Seems kind of rehearsed, but it’s expected when dealing with the media, especially since the lashing McCartney received from his seemingly passive reaction to the death of Beatles band mate John Lennon.

Following the Anthology project, Harrison collaborated with Ravi Shankar on the latter’s Chants of India. Harrison’s final television appearance was a VH-1 special to promote the album, taped in May 1997. Soon afterwards, Harrison was diagnosed with throat cancer; he was treated with radiotherapy, which was thought at the time to be successful. He publicly blamed years of smoking for the illness.

In January 1998, Harrison attended Carl Perkins’ funeral in Jackson, Tennessee, where he performed a brief rendition of Perkins’ song “Your True Love”. In May, he represented the Beatles at London’s High Court in their successful bid to gain control of unauthorised recordings made of a 1962 performance by the band at the Star-Club in Hamburg. The following year, he was the most active of his former bandmates in promoting the reissue of their 1968 animated film Yellow Submarine.

On 30 December 1999, Harrison and his wife were attacked at their home, Friar Park. Michael Abram, a 34-year-old man suffering from paranoid schizophrenia, broke in and attacked Harrison with a kitchen knife, puncturing a lung and causing head injuries before Olivia Harrison incapacitated the assailant by striking him repeatedly with a fireplace poker and a lamp. Following the attack, Harrison was hospitalised with more than 40 stab wounds, and part of his punctured lung was removed.

He released a statement soon afterwards regarding his assailant: “He wasn’t a burglar, and he certainly wasn’t auditioning for the Traveling Wilburys. Adi Shankara, an Indian historical, spiritual and groovy-type person, once said, ‘Life is fragile like a raindrop on a lotus leaf.’ And you’d better believe it.”

In May 2001, it was revealed that Harrison had undergone an operation to remove a cancerous growth from one of his lungs, and in July, it was reported that he was being treated for a brain tumour at a clinic in Switzerland. While in Switzerland, Starr visited him but had to cut short his stay in order to travel to Boston, where his daughter was undergoing emergency brain surgery, prompting Harrison to quip: “Do you want me to come with you?”

In November 2001, he began radiotherapy at Staten Island University Hospital in New York City for non-small cell lung cancer which had spread to his brain. When the news was made public, Harrison bemoaned his physician’s breach of privacy, and his estate later claimed damages. On 12 November in New York, Harrison, Starr and McCartney came together for the last time.

On 29 November 2001, Harrison died at a friend’s home in Los Angeles, aged 58. He was cremated at Hollywood Forever Cemetery and his funeral was held at the Self-Realization Fellowship Lake Shrine in Pacific Palisades, California. His close family scattered his ashes according to Hindu tradition in a private ceremony in the Ganges and Yamuna rivers near Varanasi, India. He left almost £100 million in his will.