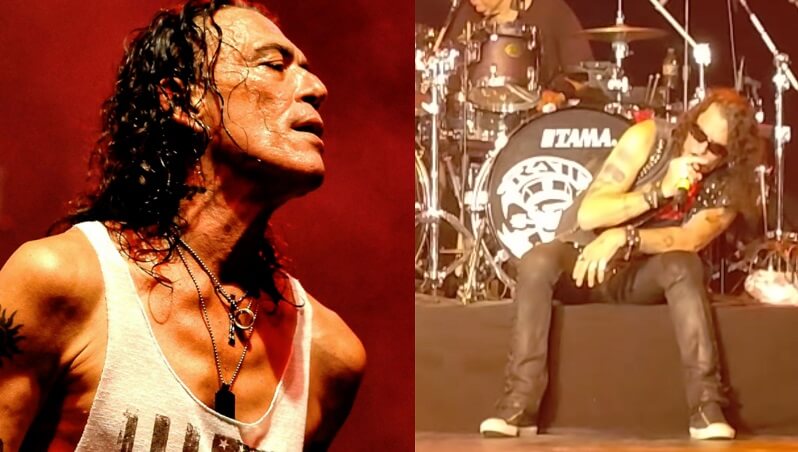 Vocalist Stephen Pearcy caught the attention of the public during a Ratt gig in Huntington, New York, on Wednesday (26). Pearcy passed the presentation sitting up and having serious trouble singing without the correct timing or tuning.

A video of “Round And Round” has been circulating on social networks throughout this Thursday (27). In it, you can see Stephen Pearcy sitting on the drums platform and visibly altered. At some point, he even relies on the instrument parts to keep from falling.

Bassist Juan Croucier explained during the show that Stephen Pearcy was “in a lot of pain” in the knee. Despite the problem, Pearcy and his colleagues from Ratt chose not to cancel the performance because they “love the fans.” The band didn’t show up after that.

See, below, the explanation of Juan Croucier:

@metalsludge Stephen Percy’s “knee” injury really carried over to his performance tonight! Hopefully his “knee” gets some attention ASAP! Thank god I was only at the show for Juan’s sweet moves or I would have been disappointed pic.twitter.com/aqyRxj0E89

Ratt is an American heavy metal band that had significant commercial success in the 1980s, with their albums having been certified as gold, platinum, and multi-platinum by the RIAA. The group is perhaps best known for hit singles such as “Round and Round” and “Lay It Down”, tracks that ranked on Billboard’s top 40 at No. 12 and No. 40, respectively, as well as other songs such as “Wanted Man”, “You’re in Love” and “Dance”. Along with groups such as friendly rivals Mötley Crüe, Ratt has been recognized as instrumental in the formation of the early 1980s Los Angeles glam metal scene, also known as “hair metal” or “pop metal”.

Mark Knopfler releases music video for his new song “Good On You Son”
Marty Balin, one of the lead singers of Jefferson Airplane, dies at age 76
Advertisement
To Top