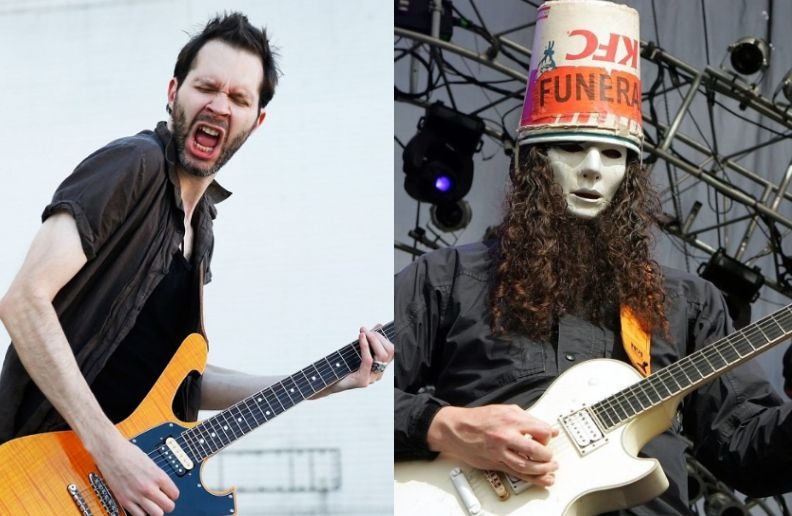 In a recent questions and answers session in AritstWorks, the virtuoso guitarist Paul Gilbert (Mr. Big) talked about when he gave guitar lessons to Buckethead.

What is your best memory while teaching or playing guitar with Buckethead?

“Buckethead was a student of mine while I was 18 and he was around 15. It was pre-bucket, he didn’t have the bucket yet.

“He had a natural, really fast kind of twitch, and in a good way – it’s like a useful twitch. He was into it, he was really into the art of guitar.

“At the time, I was really into scales, just go up and down as quickly as I could, and he would learn the stuff, but he wasn’t old enough to drive, so his mom would drop him off. I was old enough to drive but I didn’t have a car. Those were the days.”

This year Buckethead talked about this lessons:

“I actually went there to see Yngwie [Malmlsteen] – at that time his album just came out and he was the baddest. And then Paul was in some booth and he was – it was insane! He was just ripping, I’d just never seen… he had so much control, but he was also…

“The best way to plant a seed or inspire somebody is by flowing in front of them and I think that’s what that was – he was just doing it and it was… to this day, it’s still the most intense memory I have of anyone playing that makes me want to rip.

“I wish I had a video of that or anything. And the crazy thing was that I got to know him and he taught me. I still have every lesson he gave me, and he really gave me a belief in myself that I needed because I wasn’t around a lot of that.

“It was incredible – I mean my parents were super supportive – but the way he was encouraging me, and honestly, more than anything it was just seeing him and how he… more than even him teaching me, it was how he dealt with his environment.

“Because he lived in this tiny little apartment and it was just – nothing touched him. He wasn’t even aware, he just was so focused on playing and that was so huge! He just was a great teacher – he is a great teacher – and at that time I was lucky because he accepted me to take lessons from him.

“And luckily my mom and dad drove me to him – he was pretty far away. But just being around him and beginning to see that – that was pure momentum. He was just laser-focused and it was incredible to have been around him at that time.

“Seeing him at that NAMM show in that booth – he was just gone! [Chuckles] I don’t know what he would say about it, but to me, that was the baddest thing I’ve ever seen because it was just somebody at the peak of what they could do and they’re just doing it.

“It was like seeing Michael Jordan or Bruce Lee or… to me, those moments just don’t leave my mind.

“It did [make me want to be that good], seriously. [Chuckles] I mean, I tried to get my fingers to look like his fingers. I think my fingers grew after I found him because he has crazy fingers.”