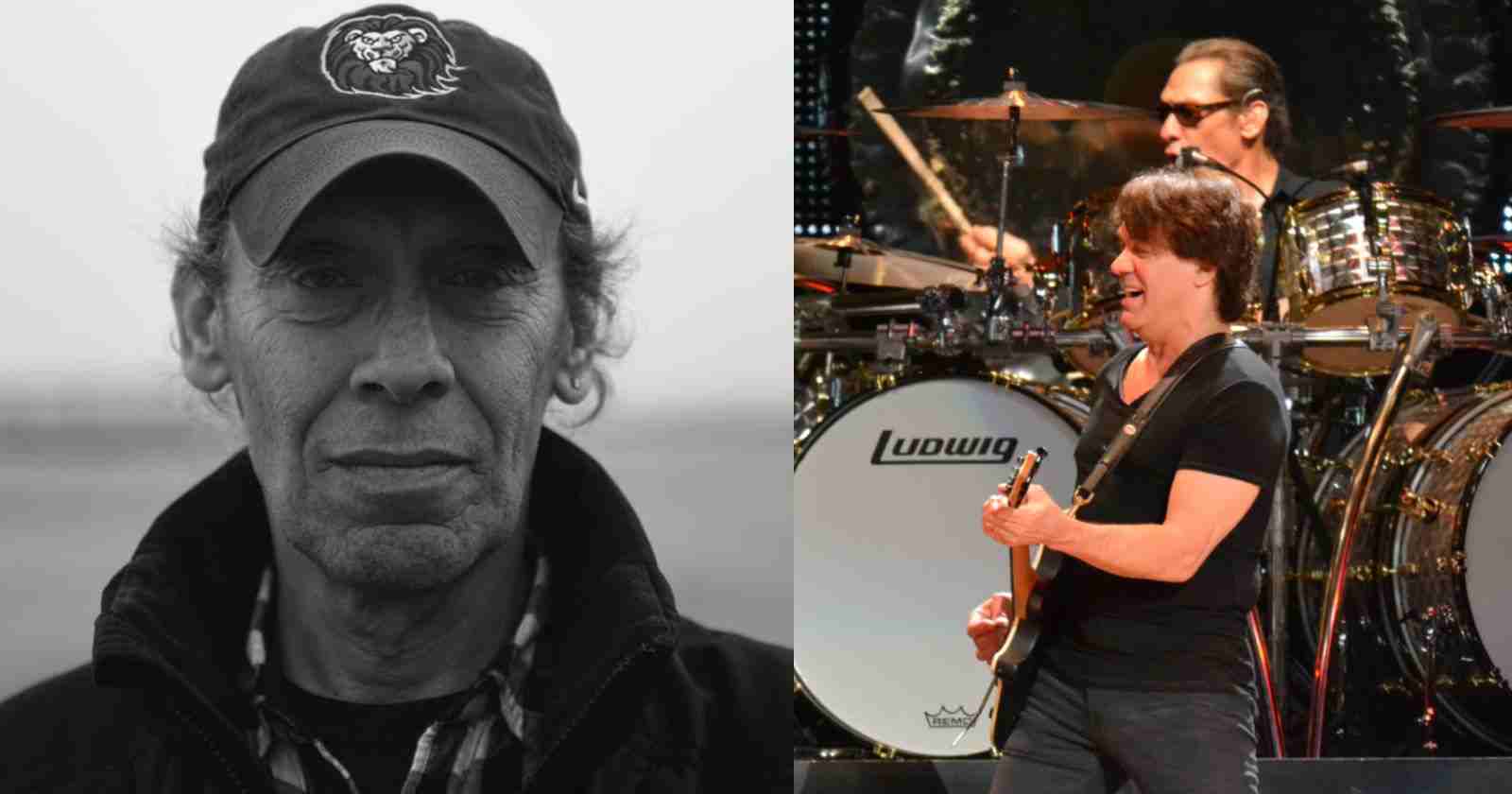 The quiet member of Van Halen, drummer Alex Van Halen (67) talked in an interview with Modern Drummer, made in August 2020 (Before Eddie’s death) only released now by the magazine. The musician talked about Sammy Hagar, David Lee Roth, internet and drinking.

“Part of it was the conflict between the band and Dave. One of the things that made everything work was that we came from opposite ends of the spectrum. Dave was vaudeville. … Ed and I were coming from Cream, Led Zeppelin, Black Sabbath. So having that strange chemistry is what made it work, oddly enough. But you do need a mediator. Otherwise we would never have gotten anything done.”

“If Dave came in with a song, I would respect how they heard it. And then it’s the old trick, ‘Keep your friends close and your enemies closer!’ And that means, ‘Okay, I’ll listen to you, but then I’m gonna make it mine. And by the end of the process it will sound nothing like what you hummed me.’”

Talking about Hagar, he said: (He) has a great rhythmic sense and of course that voice. Dave was much more of a poet. Dave is creative – 90 percent of it is garbage, but that 10 percent is fucking worth it. He said sometimes thought, “What planet did you come from?” when it came to Roth, but the drummer also pointed out that “we grew up together.”

“After we honed our skills, you learn the connection between the people and the music. Playing live, there should be no dead space. Never turn your back on the audience and never insult them. They are equal to you. That line that separates the audience from the stage, that’s not a line. That’s just to keep them from puking on your shit! You’re there to make the audience feel good.”

“There’s nothing left in the music business. It’s a bunch of ones and zeroes. In the old days you’d get a dollar a record, and now you get 50 cents for 275,000 streams. It’s insane. It’s wrong. Now the only thing you have is playing live, which is ironic, because that’s how it all started.”

Alex Van Halen said that until the 1984 era, the band traveled together in the same bus and that made them be closer:

“Leonardo da Vinci said, ‘Large rooms distract the mind; small rooms focus the mind’. When you’re all tight in close quarters, it focuses your energies and you learn how to deal with issues and problems. If you’re in a large space, you never even have to say ‘hello’ to the other guys. What’s that all about?”

“I’d rather have someone wake up in the morning and say, ‘Hey, fuck you!’ as opposed to not saying anything at all,” Alex continued. “I’m serious. Give me some emotion! That’s what this is about. Music is a celebration of being human. With the drums at the forefront!”

Talking about books revealing the history of the bands and interviews, the musician said:

“All these people are writing books about the band and they know nothing about the inner workings of this band. And Ed and I don’t say anything because we’re not in the business of bullshitting on the internet and books and all that kind of crap. We just want to play. It’s that simple.”

“All the people who think they know how the band operates, maybe even including Dave (Lee Roth), weren’t 100 percent there all the time. Ed and I are the only ones there day and night. When they leave, Ed and I go back in and work on shit. Or Ed, Wolf (Eddie’s son) and I go back and work on it. And ‘working’ means sometimes just playing it, or Ed finishing a piece of it. So when we get into the studio to actually record it, and there’s friction, it’s easy to say ‘The brothers are fighting again.’”

“Being in a band is no different from any other territorial dispute. Everybody is trying to claim a certain piece of territory. The real solution is to play together, to play as a unit. You’re much stronger that way. Conflict is good up to a certain point. Conflict causes friction, causes heat, but once it gets to a certain point, that’s no good.”

About quit drinking, the musician recalled how the death of his father led him to quit:

“We spent the first 30 years of our lives trying to cloud what reality was … but by the time you’re 30, you’d better change your ways or you ain’t gonna make it any further. I believe we’re very lucky to be able to do this – to make music and make a living at it and to share it with people. We’re very luck, so don’t fuck it up.”

“When our dad passed away, after our long life of touring and making music [where] there was alcohol involved … I looked at him, and unspoken, I said, ‘I’ll try to make it better.’ So I quit. You do have an obligation and responsibility to [work] without artificial inspiration. We all look for some kind of meaning in life. But Ed and I were lucky that we found it early. So I can’t complain.” Alex Van Halen said.

The 8 best Brian May (Queen) quotes about life, astronomy and music
Megadeth bassist David Ellefson gives his opinion on Metallica
Advertisement
To Top