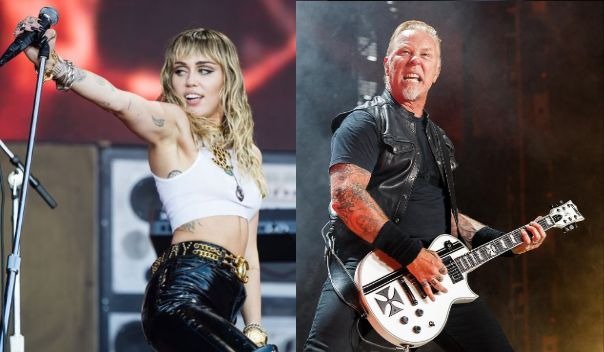 Pop singer Miley Cyrus sang Metallica’s “Nothing Else Matters” during her set at the Glastonbury festival last weekend. She also played her “Head Like A Hole” version of Nine Inch Nails that she recorded for the Black Mirror series.

The Metallica classic was played by Cyrus a few months after drummer Lars Ulrich revealed that he was surprised by her performance of Temple of the Dog’s “Say Hello 2 Heaven” at the Forum in Los Angeles during the tribute show for Chris Cornell.

“Nothing Else Matters” was released in 1992 as the third single from their self-titled fifth studio album, Metallica. The song peaked at number 11 on the Billboard Mainstream Rock Tracks chart, number 6 on the UK Singles Chart as well as top-ten on many other European charts.

“Nothing Else Matters” was featured as a playable track in the music video game Guitar Hero: Metallica. Recognized as one of Metallica’s best known and most popular songs, it has become a staple in live performances. The song has been covered nearly 100 times.