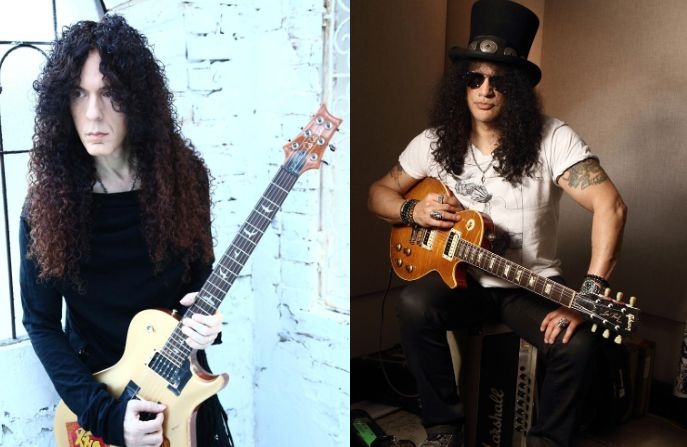 In a interview on the Danko Jones podcast, the guitarist Marty Friedman talked about the recording of the Megadeth classic album “Rust In Peace” and he revealed that he used Slash’s picks on it.

“I was recording ‘Rust in Peace,’ and Mike Clink [who produced each of the five GN’R full-length albums] was producing. He had just finished Guns N’ Roses.

“I was having trouble on one of the rhythm guitar parts – they’re really quite tricky – and I saw a Slash guitar pick on the console. I’m like, ‘Let me try this pick’ – nailed the thing in one take with Slash’s pick.

“The mojo is somehow… Whether or not it’s who our absolute hero is, it’s irrelevant. It’s people we respect and admire, and we hopefully will get a little bit of magic from it, and lo and behold, the magic comes sometimes.”

Hear the “Kaeritakunatta Yo” song below:

Martin Adam “Marty” Friedman (born December 8, 1962) is an American guitarist, known for his tenure as the lead guitarist for heavy metal band Megadeth which spanned nearly the full decade of the 1990s.

He is also known for playing alongside Jason Becker in Cacophony until 1989, as well as his 13 solo albums and tours. Friedman has resided in Tokyo, Japan since 2003, where he has appeared on over 700 Japanese television programs such as Rock Fujiyama, Hebimeta-san, Kouhaku uta gassen and Jukebox English. He has released albums with several record labels, including Avex Trax, Universal, EMI, Prosthetic and Shrapnel Records.