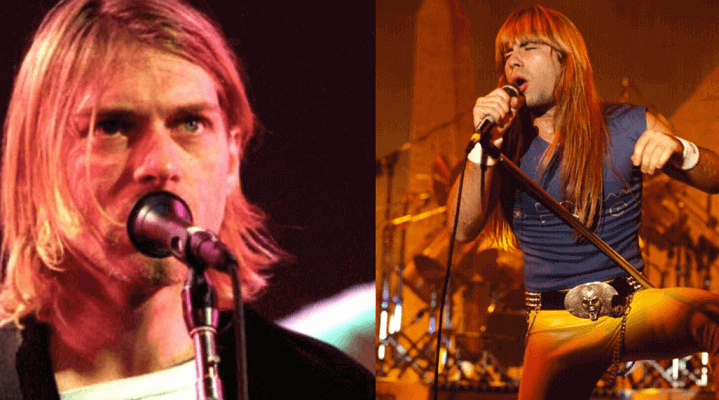 The following video shows the audio released via Reddit from what is supposed to be Kurt Cobain playing an excerpt from “The Number of the Beast” by Iron Maiden. The recording would have been performed between 1987 and 1988 in Olympia, where Kurt lived in the late eighties.

He was a Maiden fan

A mix tape called “Montage of Heck” made by Kurt Cobain at age 21 leaked on the internet in 2014 and revealed that probably the vocalist and guitarist was an Iron Maiden fan. The sound experiment would have been made only a year before the release of the album “Bleach” (1989), Nirvana’s debut.There are no complete songs on the tape entitled “Montage of Heck”, the mix tape is a collage of noises, made in a common recorder, with sounds and snippets of songs from the most diverse genres . The tape was released by the sites “Consequence of Sound” and “Dangerous Mind”.

The songs include James Brown’s “Hot Pants, Jackson Five’s” ABC, “William Shatner’s” Wild Thing, “Queen’s” Get Down Make Love, “” I Want Your Sex, ” of George Michael, “Run to the Hills” by Iron Maiden, and “Call Any Vegetable” by Frank Zappa. Mixed in the Beatles’ song excerpts (“Being for the Benefit of Mr. Kite!”, “A Day in the Life” and “Taxman”), Cobain took the opportunity to include flushing sounds and voices of characters such as Fred Flintstone .