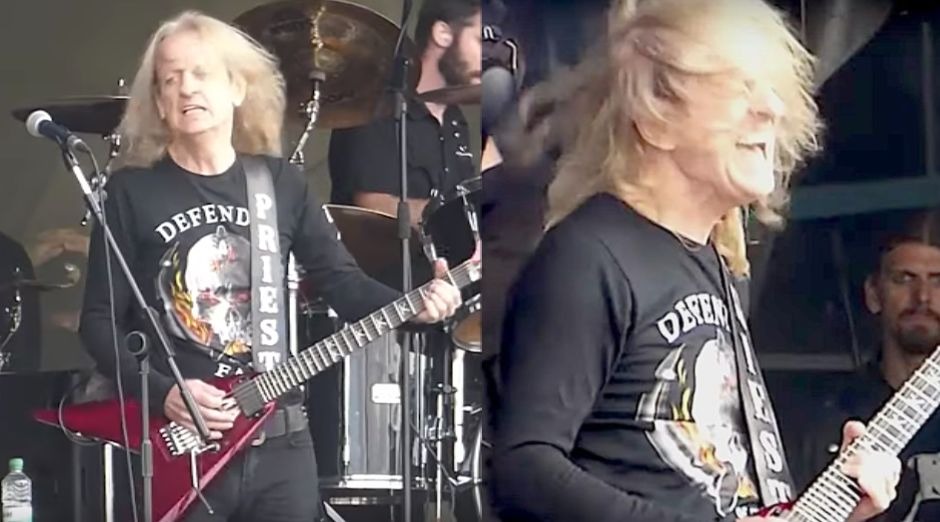 The legendary Judas Priest guitarist K.K Downing returned to the stage after 10 years of his retirement. The guitarist played with the Ex-Manowar axeman Ross “The Boss” Friedman for four songs at the Bloodstock Open Air festival at Catton Park, Derbyshire in United Kingdom.

In an interview to The Unchained Rock Show after the performance, the guitarist said:

“It was a bit of a whirlwind. I was saying to the other guys there, I don’t know whether I dropped from a helicopter as a bungee jumper, once I landed after 20 seconds and realized where I was, I was good after that point.”

According to K.K., the pairing with Ross was the perfect way for him to get reintroduced to the live stage, especially because of their respective standing in the upper echelons of the heavy metal genre.

“Ross has been around a long time; he goes back,” Downing said. “And those guys are full-on metal — same as me. ‘Cause originally, I was just meant to pick up an award here. And the guys said, ‘Well, you’re gonna get on a stage. You think you wanna put a guitar on.’ And I said, ‘I’m not Ed Sheeran.”

“I’m not gonna go busking on a bloody stage.’ ‘I know — what about jumping on with Ross?’ Because the format, being a four-piece, I jump in and make it a guitar duo — that makes sense. First and foremost, I didn’t want it to be disruptive to their set… I just came on as a special guest and did that at the end of their set. And I think it’s not a bad thing to try and do things like that. Maybe this could be the first of many things where bands get together and perform together.”

He said he didn’t had a lot of time to rehearse:

“The guys landed… Some of the guys came in from L.A. via Paris the same day we were supposed to be rehearsing,” he explained. “But we did manage to squeeze an hour or so in the following day. To be honest, we didn’t have the experience of, like… A lot of the bands today, they’re on tour… It was a jam, really… And there was quite a bit of improvisation in there. And that’s where it is.”