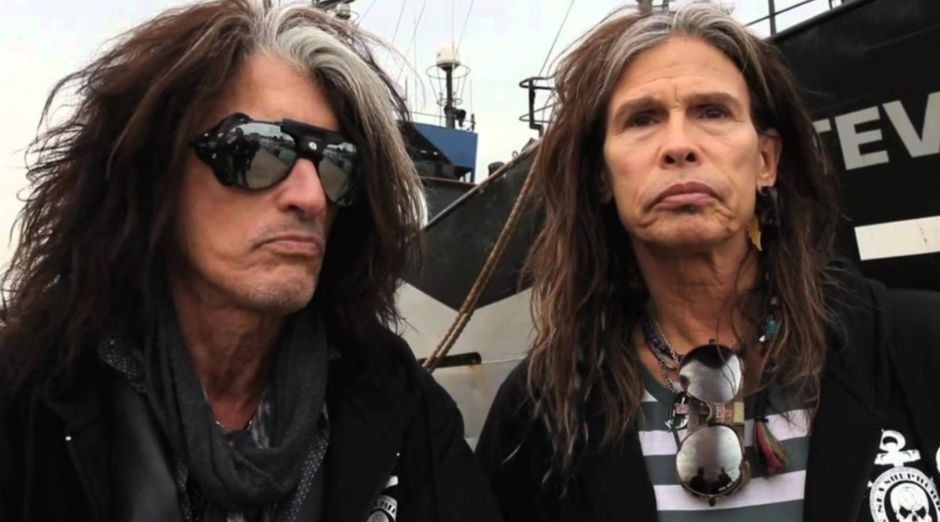 In an interview with Ultimate Guitar, Aerosmith guitarist Joe Perry revealed how his Aerosmith bandmate Steven Tyler reacted to his side project Hollywood Vampires, supergroup composed by Alice Cooper, Johnny Depp and more.

What kinds of guitars did you use on the record?

“I pretty much used about three or four main guitars. Over the course of a couple of months a lot of guitars end up getting played for bits and pieces but we each have our favorite things.

“Tommy has a 335 he really likes and also an SG. I would say those were the main guitars he played and Johnny is definitely a Telecaster man. He’s got a variety of those he played. We played each other’s guitars sometimes depending on what the part was.”

So you ended up playing a 335 and SG and Telecaster?

“It was very freeform in the studio and there was no producer looking over our shoulder. There was no pressure other than to get these songs off our chests.

“As it turns out, I think the record sounds like the Vampires but there are certainly echoes from the other bands we’ve been in and some of the songs I hear Johnny playing when he’s on his own.”

What was that like writing guitar parts for three guitars?

“Having played with the band live, we know how to make three guitars work. You definitely bring all your chops into making it work but it’s just how you use them.”

So all the tracks on ‘Rise’ were actually taken from these very professional-sounding demos?

“There was maybe a little editing afterward – when Alice really got into the lyrics and there were a few minor changes in the lyrics. We all played everything in the studio.

“Whether it was something really standard like playing a three-part guitar thing or if it needed a piano part or a kazoo or whatever.”

Where did you record the album?

“Johnny has a pretty well-outfitted studio. It was just a very creative time.”

Did you reach back to what you’d done with Aerosmith in terms of the twin-guitar thing with Brad Whitford? Did you bring that approach to the album?

Because the Hollywood Vampires was such a high-profile band, did you ever think, ‘I really want to show everybody what I can do away from Aerosmith’?

“No, basically any time I go to the studio I bring my A-game but I also go in with a clean slate, you know what I mean? I don’t think back and go, ‘Well, this has gotta be whatever.’

You didn’t feel any pressure because of the huge success you’d had with Aerosmith?

“It was like, ‘That was then and those are the songs we’ve done for 50 years and this is something new.’ I had just finished working for six or eight months on my last solo record [‘Sweetzerland Manifesto’].

“In fact, I only did one or two shows to promote it when I finished it because about a week later we were working on the Vampires record. So I was pretty much well-ensconced in the studio and in that frame of mind. You’re always putting the best you can do.”

“I think what you’re asking is did Aerosmith influence me and make me want to push it. No, I don’t think so. I think this band can stand up in front of any band and it’s a great rock band.

“It’s an absolutely great rock band and the bottom line is any record we make will reflect that. It was fun to do and that’s the main thing.”

At this point in your career, if it’s not fun then why even do it, right?

“Everybody dug down and we let it all fly. There were certain things where I could see saying, ‘Don’t play that and don’t go there because you don’t want it to sound like an Aerosmith record.’

“But there were very few of those things that even arose. There was certainly nothing on the record I did where you would go, ‘I heard that. He stole that from an Aerosmith song.’

“I just don’t think there’s any of that on there. It was a really good record to make and I think it sounds like a Vampires record.”

You had Jeff Beck play on ‘Welcome to Bushwhackers.’ Were you in the studio with him?

“No, he took the tapes home with him. There were a lot of people hanging around in the studio but we had dinner and a few drinks and some laughs.

“It would have been great if he would have done it in the studio but I totally understand. I think he felt a lot more comfortable taking it home to his place and playing the tracks at his place.”

What did you think of Beck’s performance?

“I thought it suited the song really well. Like just about everything else, he didn’t play what I would have expected but it works great.”

Finally, what has it been like doing the Aerosmith: Deuces Are Wild residency in Las Vegas [the band has been playing dates there going all the way back to April]?

“I’m really having a good time doing it on a lot of levels. Just from being able to stay in the same place and not have to pack and move for every gig is great.

Staying in one venue [Park Theater at the new Park MGM resort] must be amazing.

“There’s a flow to the production. What we put up at the beginning of the first leg has definitely been refined over the gigs.

“As a guitar player when I’m rehearsing or practicing and trying to learn something new, the next day I go out and I get to try it on stage. That’s a great thing.

“I’ve got my practice rig set up in my room and just from that point of view it’s a lot of fun.”

Has the rest of the band dug the experience?

“I think we’ve really found it to be a lot of fun to do. It’s by no means boring or anything. I think it’s really a lot of fun.”

Lastly, has Steven Tyler or any of the Aerosmith guys heard the Vampires record?

“I think so. Steven actually came out and sat in with us on a song on the last tour [Tyler sang on ‘The Train Kept A-Rollin” at the band’s show at the Greek Theater in Los Angeles back in May]. I think he liked it.”

Yngwie Malmsteen responds to people calling him Egomaniac
Ex-Judas Priest K.K Downing returns to the stage after 10 years
To Top