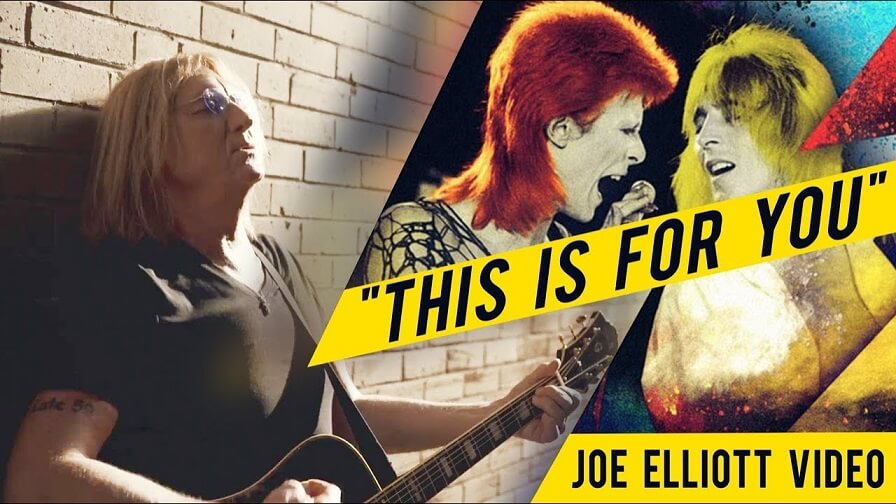 Def Leppard vocalist Joe Elliott has released a video clip in honor of the late guitarist Mick Ronson. “This video is my gift to the memory of Mick Ronson who gave me so much in my youth and later when we met,” Elliott said.

Ronson recorded with David Bowie and Morrissey, in addition to releasing several solo albums. He died of cancer in 1993, at age 46. Elliott helped Ronson record his latest album and sang in two tracks. After the guitarist passed away, Elliott finished the album Heaven And Hull, which was released posthumously in 1994.

The clip for “This Is For You” was filmed during Def Leppard’s recent tour in North America. The song is part of the soundtrack of the documentary Beside Bowie: The Mick Ronson Story.

Michael Ronson was an English guitarist, songwriter, multi-instrumentalist, arranger, and producer. He achieved critical and commercial success working with David Bowie as one of the Spiders from Mars. He was a session musician who recorded with Bowie followed by several albums with Ian Hunter, also Morrissey, as well as a sideman in touring bands with Van Morrison and Bob Dylan.

He also recorded several solo albums, the most popular being Slaughter on 10th Avenue, which reached No. 9 on the UK Albums Chart. Ronson played with various bands after his time with Bowie. He was named the 64th greatest guitarist of all time by Rolling Stone in 2003 and 41st in 2012 by the same magazine.