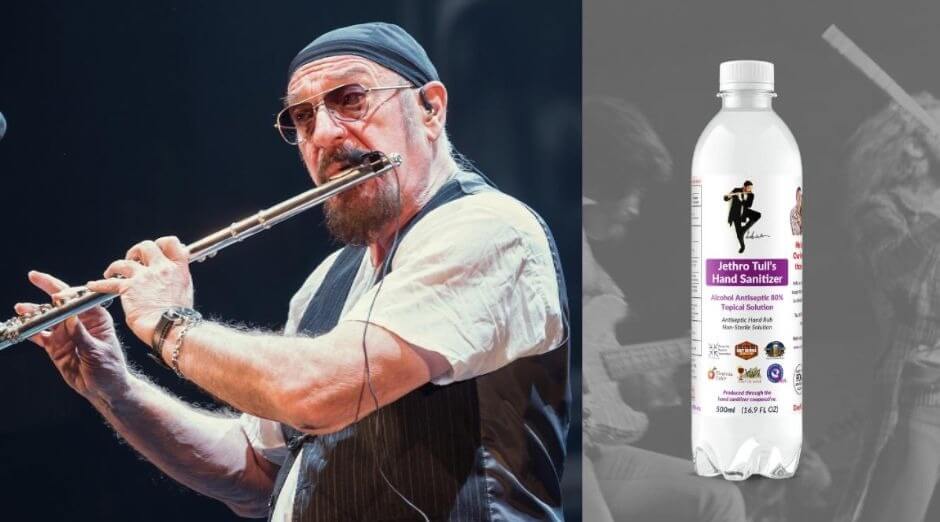 Jethro Tull launched a hand sanitizer that is helping raise money in the U.S. for the charity “Helping The Heroes”. Approved by Ian Anderson himself, the sales result will help small businesses, veterans, first responders, healthcare professionals and others in need through various charities. Including the Center for Applied Innovation, owned by Virginia veterans with disabilities (USA). Besides the non-profit campaign Helping The Heroes.

Currently, the disinfectant is only available in the United States, as the current regulations of DHL, FEDEX, UPS and USPS do not allow the sending of manual disinfectant to customers outside the United States. The product begins to be delivered on July 20. The bottles cost $ 9, with a four-bottle package costing $ 32 and a six-bottle package costing $ 48.

Jethro Tull said in an statement about the disinfectant: 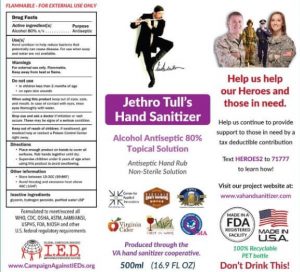 “A wee drop of the strong stuff! Of course for the hands only. Keep yourself safe, and by doing that you keep others safe, too. All in a good cause so choose this. The only officially-sanctioned Jethro Tull sanitizer hand rub” – Ian Anderson”

“Please note: The Jethro Tull Hand Sanitizers are only available in the USA. All Sales profit the charities: Virginia Service Disabled Veteran-Owned CAI and the non-profit Partners International Foundation’s Helping the Heroes.”

Jethro Tull was formed in Blackpool, England, in 1967. Their music is characterized by the lyrics, the vocal style full of mannerisms and the unique work on the flute of it’s leader Ian Anderson. In addition to a complex and unusual musical construction. Initially based on the blues rock style, Jethro Tull ended up incorporating elements of classical music, folk, jazz, hard rock, progressive rock, and art rock into their sound.

The band has sold more than 60 million records worldwide. They reached a hiatus point in 2011, when Ian Anderson sought to perform solo projects (which led to the albums Thick as a Brick 2 and Homo Erraticus). Making guitarist Martin Barre also seek a solo career (releasing a compilation album and another studio titled Away with Words).

Recently Ian Anderson stated that Martin Barre is no longe on Jethro Tull, and he is the only original member on the band.