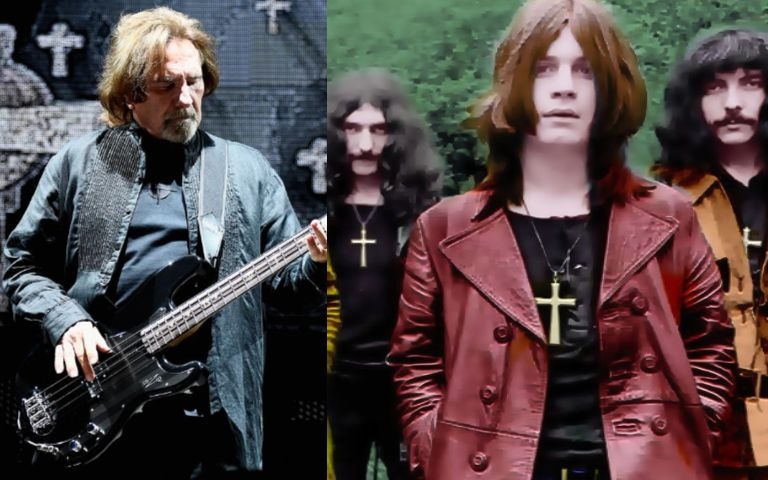 In the first years of the band in all Black Sabbath photos and videos you can see Ozzy Osbourne, Bill Ward, Geezer Butler and Tony Iommi wearing crosses. In an interview with Metal Hammer, Geezer said it was due to a curse that band used the crosses.

“There was some black magic organization that wanted us to play at a stone circle. We said no – we were sort of against Satan, as opposed to promoting it – so they allegedly cursed us. The head of the white witches call our management and said he knew we had a curse put on us, and we should wear crosses and he’d do a ritual thing. It all sounds so hokey.”

“That’s why we started wearing crosses! Ozzy [Osbourne]’s father made them for us. He used to work at a metal factory making car parts, so he made us these great big crosses out of spare metal.”

In his 2009 memoir I Am Ozzy, Osbourne told his own version of the story.

“I couldn’t believe it when I learned that people actually ‘practiced the occult. These freaks with white makeup and black robes would come up to us after our gigs and invite us to black masses at Highgate Cemetery in London. I’d say to them, ‘Look, mate, the only evil spirits I’m interested in are called whiskey, vodka and gin.’ At one point we were invited by a group of Satanists to play at Stonehenge. We told them to fuck off, so they said they’d put a curse on us.”

About the interest by the occult, Geezer said:

“I’d always hear about Satan, so I wanted to find out what that was about. So I started reading up on astral planes, all that kind of stuff. I used to have weird experiences when I was a kid; orbs appearing to me…”

“It sounds like I’m nuts. When I was four, I felt a presence in the room, and I saw this orb hovering above my head and I could see the future in it and it just disappeared into the fireplace. I used to have these dreams. … I’d wake up and it would happen the next day. A lot disappeared when I got to my teen years.”

With father, boy with cerebral palsy has been to over 1,000 metal shows
AC/DC releases unseen “The Jack” live performance
Advertisement
To Top