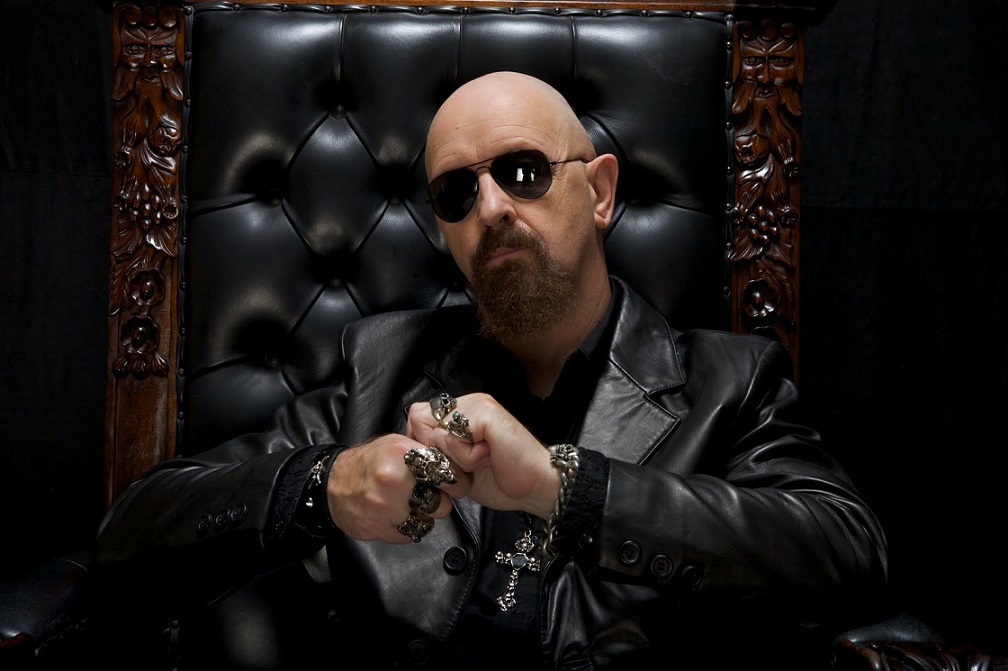 Judas Priest revealed to Bloody Disgusting in 2009, his 11 favorite horror movies. See them below: 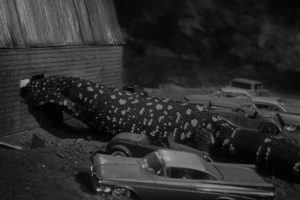 The Giant Gila Monster is a 1959 hot rod/monster/science fiction film, directed by Ray Kellogg and produced by Ken Curtis. This low-budget B-movie starred Don Sullivan, a veteran of several low budget monster and zombie films, and Lisa Simone, the French contestant for Miss Universe of 1957, as well as comedy relief Shug Fisher and KLIF disc jockey Ken Knox. The effects included a live Mexican beaded lizard (not an actual Gila monster) filmed on a scaled-down model landscape. The movie is considered a cult classic.

The Brain That Wouldn’t Die (also known as The Head That Wouldn’t Die) is a 1962 American science fiction horror film directed by Joseph Green and written by Green and Rex Carlton. The film was completed in 1959 under the working title The Black Door but was not theatrically released until May 3, 1962, when it was released under its renamed title on a double bill with Invasion of the Star Creatures.

The main plot focuses upon a mad doctor who develops a means to keep human body parts alive. He keeps a woman’s severed head alive for days, and keeps a lumbering, misshapened brute (one of his earlier failed experiments) imprisoned in a closet. 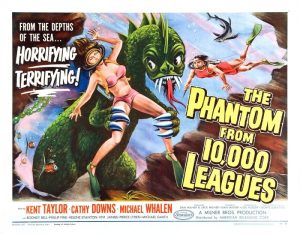 The Phantom from 10,000 Leagues is a 1955 independently made American black-and-white science fiction monster film, produced by Jack Milner and Dan Milner (who also directed), that stars Kent Taylor and Cathy Downs. 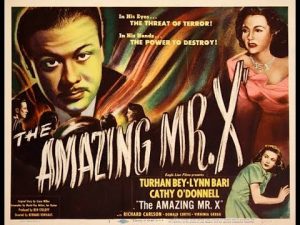 The Amazing Mr. X also known as The Spiritualist is a 1948 American horror thriller film noir directed by Bernard Vorhaus with cinematography by John Alton. Like Nightmare Alley (1947), this film tells the story of a phony spiritualist racket. The film is prominently featured in Alton’s book on cinematography Painting with Light (1949).

The film stars Turhan Bey, Lynn Bari, Cathy O’Donnell, and Richard Carlson. Eagle-Lion Films signed a contract with Carole Landis for the part played by Bari, but Landis committed suicide a few days before shooting began. The film is in the public domain. 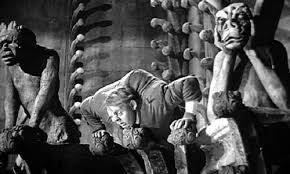 The Hunchback of Notre Dame is a 1939 American film starring Charles Laughton and Maureen O’Hara. Directed by William Dieterle and produced by Pandro S. Berman, the film is based on Victor Hugo’s 1831 novel of the same name.

For this production RKO Radio Pictures built on their movie ranch a massive medieval city of Paris and Notre Dame Cathedral, one of the largest and most extravagant sets ever constructed. 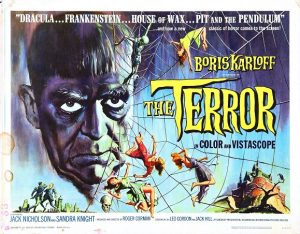 The Terror (1963) is a low-budget American Vistascope horror film produced and directed by Roger Corman about a French officer who finds an intriguing woman who is believed to be the ghost of the baron’s long departed wife.

It was filmed on sets left over from other AIP productions, including The Haunted Palace. The movie was also released as Lady of the Shadows, The Castle of Terror, and The Haunting; it was later featured as an episode of Cinema Insomnia and Elvira’s Movie Macabre.

The movie is sometimes linked to Corman’s contemporary series of films based on the works of Edgar Allan Poe, but The Terror is not based on any text by Poe. 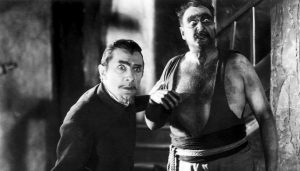 White Zombie is a 1932 American pre-Code horror film directed and independently produced by Victor and Edward Halperin. The screenplay by Garnett Weston, based on The Magic Island by William Seabrook, tells the story of a young woman’s transformation into a zombie at the hands of an evil voodoo master.

Large portions of White Zombie were shot on the Universal Studios lot, borrowing many props and scenery from other horror films of the era. White Zombie opened in New York to negative reception, with reviewers criticizing the film’s over-the-top story and weak acting performances. While the film made a substantial financial profit as an independent feature, it proved to be less popular than other horror films of the time. 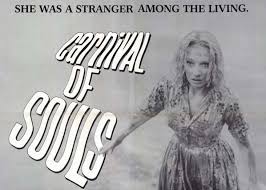 Carnival of Souls is a 1962 American independent horror film written, produced, and directed by Herk Harvey, and starring Candace Hilligoss. Its plot follows Mary Henry, a young woman whose life is disturbed after a car accident. She relocates to a new city, where she finds herself unable to assimilate with the locals, and becomes drawn to the pavilion of an abandoned carnival; director Harvey also appears in the film as a ghoulish stranger who stalks her throughout.

Filmed in Lawrence, Kansas and Salt Lake City, Carnival of Souls was shot on a budget of USD$33,000, and Harvey employed various guerrilla filmmaking techniques to finish the production. It was Harvey’s only feature film, and did not gain widespread attention when originally released as a double feature with The Devil’s Messenger in 1962. 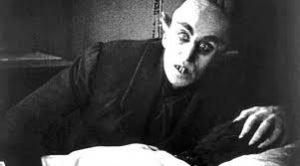 Nosferatu is a 1922 German Expressionist horror film, directed by F. W. Murnau, starring Max Schreck as the vampire Count Orlok. The film, shot in 1921 and released in 1922, was an unauthorized adaptation of Bram Stoker’s Dracula (1897). Various names and other details were changed from the novel: for instance, “vampire” became “Nosferatu” and “Count Dracula” became “Count Orlok”.

Stoker’s heirs sued over the adaptation, and a court ruling ordered that all copies of the film be destroyed. However, a few prints of Nosferatu survived, and the film came to be regarded as an influential masterpiece of cinema.

The film was released in the United States on 3 June 1929, seven years after its original premiere in Germany. 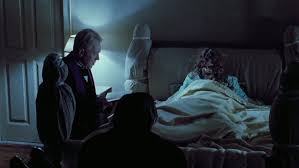 The Exorcist is a 1973 American supernatural horror film adapted by William Peter Blatty from his 1971 novel of the same name, directed by William Friedkin, and starring Ellen Burstyn, Linda Blair, Max von Sydow, and Jason Miller. The film is part of The Exorcist franchise.

The book, inspired by the 1949 exorcism of Roland Doe, follows the demonic possession of a 12-year-old girl and her mother’s attempts to win her back through an exorcism conducted by two priests. The adaptation is relatively faithful to the book, which itself has been commercially successful (earning a place on The New York Times Best Seller list).

The Shining is a 1980 horror film produced and directed by Stanley Kubrick and co-written with novelist Diane Johnson. The film is based on Stephen King’s 1977 novel of the same name.

The Shining is about Jack Torrance (Jack Nicholson), an aspiring writer and recovering alcoholic, who accepts a position as the off-season caretaker of the isolated historic Overlook Hotel in the Colorado Rockies.

Wintering over with Jack is his wife Wendy Torrance (Shelley Duvall) and young son Danny Torrance (Danny Lloyd), who possesses “the shining”, an array of psychic abilities that allow Danny to see the hotel’s horrific past.

Bruce Dickinson says what he thinks about drugs
Axl Rose says Melania Trump, US first lady, is an ex-hooker
Advertisement
To Top