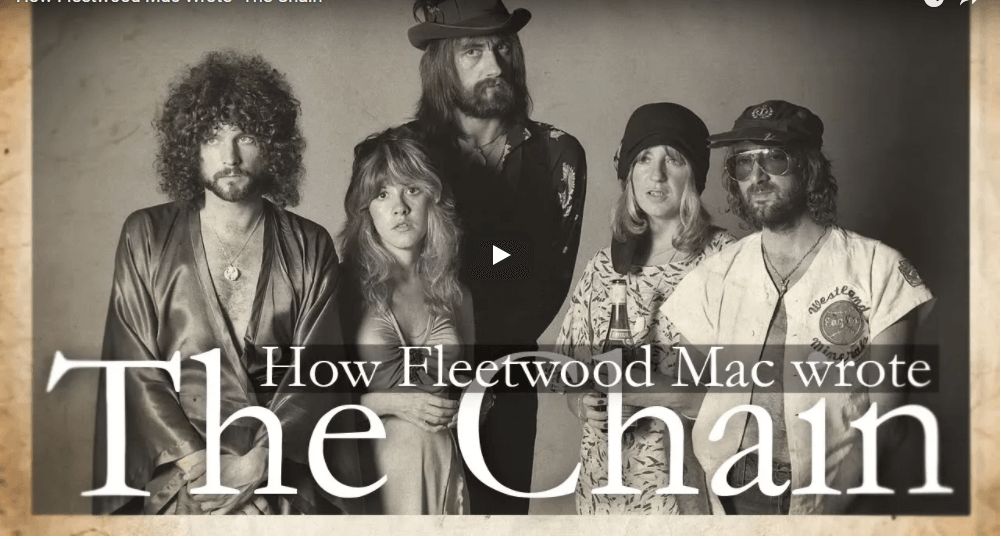 One of the biggest bands in classic rock, Fleetwood Mac is true hitmaker and one of the most famous songs of the group is “The Chain”, released on their best-selling album Rumours.

It is the only song from the album credited to all five members (Stevie Nicks, Lindsey Buckingham, Christine McVie, John McVie, and Mick Fleetwood). On the video below you can discover how the song was written.

Following the critical and commercial success of Rumours, “The Chain” has been featured on The Dance, a 1997 live concert CD/DVD package, as well as several greatest hits compilations. It has attained particular fame in the United Kingdom, where the instrumental section is used as the theme tune for the BBC and Channel 4’s television coverage of Formula One.

According to interviews on the writing of Rumours, the final section of “The Chain”—beginning with a bass progression—was created by John McVie and Mick Fleetwood.

Stevie Nicks had written the lyrics separately and thought they would be a good match; she and Christine McVie did some reworking to create the first section of the tune. Other elements were worked in from an early project of Christine’s called “Keep Me There”.

The blues-style piano motif was removed, and the remainder combined with a bridge from yet another piece manually using a razor blade to cut and splice the tapes. To complete the song, Buckingham recycled the intro from an earlier song from a duet with Nicks, “Lola (My Love)”, originally released on their self-titled 1973 album.

Due to the spliced nature of the record (the drums and guitar were the only instruments actually recorded in each other’s company) and its sporadic composition and assembly from different rejected songs, “The Chain” is one of only a few Fleetwood Mac songs whose authorship is credited to all members of the band at the time.

The finished song itself has a basic rock structure, although it has two distinct portions: the main verse and chorus, and the outro. The song shows influences of hard rock, folk, and country, using a dobro to play the guitar riff.