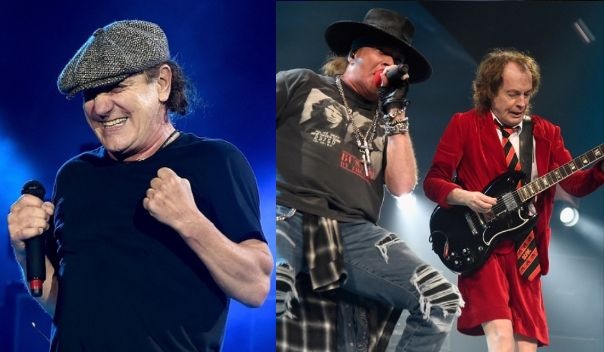 In an interview on podcast Appetite for Distortion, ex-Guns N’ Roses manager Alan Niven talked the Brian Johnson comeback in AC/DC. Based on his sources, the singer is not in condition to make a full tour reunion.

Now the rumor is that Brian Johnson is back in AC/DC. I would have loved – and I know you differ in opinion – but I liked Axl/DC.

“I’m not sure that Brian, that his condition is going to let him tour. That is the rumor I’ve heard… They can record together, but he may not tour with them. So Axl/DC may well be an entity into next year, who knows?”

Oh, that would be cool. I would love for on the album if Axl could sing on it with Brian. How badass would that be? To think that Brian has been through a lot, all these guys that we’ve idolized, looked up to as figures are just people, just flesh and blood. We were all just Bill Bailey, so to speak.

“Yeah, and there is no school to go to, to deal with ‘success.’ Don’t be very surprised if you’re very successful and some point you’ll get a little taste of PTSD. [Laughs]”

The source points out that in other AC/DC news, Eddie Trunk recently talked about the possibility of AC/DC touring with Brian Johnson and releasing a new studio album. The radio host said:

“However, there was a recording done and they are going to figure out what they are doing with that. So that’s all he told me. He didn’t tell me about Axl or who is on it, he just basically said: ‘The guys went in, they went in off of some stuff that Malcolm had, it’s a celebration of Malcolm, there is a record done, whether and how that comes out they’re not sure and whether they play or not it’s not sure.'”