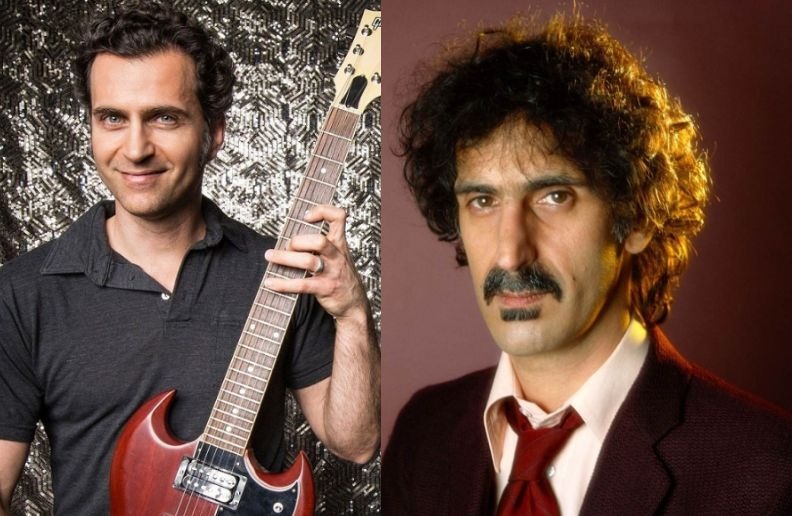 In an appearance on Jonesy’s Jukebox Dweezil Zappa, son of the late Frank Zappa talked about his father relation with money and his musical carreer.

It seems like a lot of his tunes, it always seemed to me like your dad was taking the piss?

“He had a sarcastic attitude about a lot of things – I don’t even know if you could find an example of him writing a very earnest song that’s you know, feelings or emotions, like, heart-on-his-sleeve kind of thing. He wasn’t that kind of person, that would present things in that way.”

When your dad was young, do you remember what he used to listen to?

“I actually would listen to music with him on numerous occasions. He was always working in the studio. If he wasn’t working on his own, he was listening to some other kind of music.

“He had a lot of rhythm and blues records. He liked Johnny Guitar Watson, who was a friend of his, Howlin’ Wolf. He was also interested in modern classical music, people like Edgard Varese, Stravinsky, different composers…

“And as a kid, we started by going to the library at about 11 years and he taught himself everything about music by reading books.”

So do you read music?

“I’m not very good at that side of it. I learn everything by ear. I’m able to play what I hear and I’m able to make sure I’m playing the right note because everybody else in the band is doing the same amount of due diligence.

“If we’re going to learn something and we don’t have scores for it, we’ll transcribe it from a recording. For example, on this tour, it’s called ‘Choice Cuts’ because we’re learning things that are really rare things that haven’t been released.

“So if we find a concert that’s been recorded in 1974 that’s never been released – it’s just a bootleg, but my dad introduces a new song that’s never been played before – we’ll learn that from that recording.”

Did he care about making dough?

“Well, only to the extent that it would allow him to make more music. So it wasn’t about, ‘How much money could I make doing this?’. That’s one of the things, you don’t see him trying to become a commercial artist.”

Did he hate [1982’s] ‘Valley Girl’? It was successful on a kind of mainstream level…

“No, because it helped him do other things that he wanted to do. Basically, how he operated was that he would tour and record every single concert and then he would make records out of that. So he would always take a mobile studio out with him.

“Now you can do it on a laptop, but he was taking a full mobile studio, so that helped him be able to do more recordings that he wanted to do.

“When we do the music, we’re giving everybody a really broad cross-section, we play some of his classical music, we play some doo-wop stuff, we play stuff from every era of his career from the Mothers of Invention to the middle-’70s era, to even into the 80s, so it’s a challenge to learn all of those styles and play them authentically, and we use all of the recordings as our guideline.”