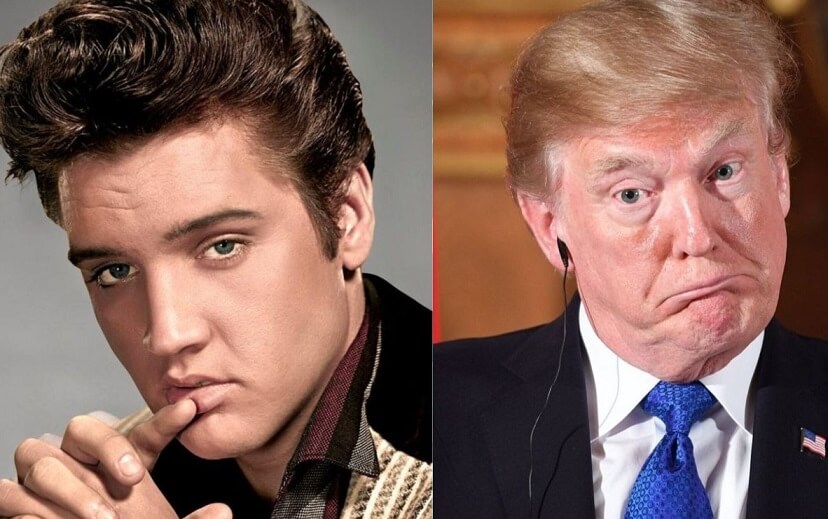 Donald Trump said people used to talk that he looked like Elvis Presley. In Tupelo, Mississippi, the President of the United States used the opportunity to visit where Elvis was born. Besides, of course, to remember the questionable story.

The Wall Street Journal published Trump’s words. “Taking off my blond hair, when I grew up people said I looked like Elvis. I always considered it a great compliment. We love Elvis. ”

The video of Trump comparing to Elvis – which generated many laughs – began to be shared online.

President Trump: "I shouldn't say this. You'll say I'm very conceited, 'cause I'm not. But other than the blond hair, when I was growing up, they said I looked like Elvis." https://t.co/NoXZIF9MIo pic.twitter.com/3FYRl1Ayop

This month, Presley received posthumously the Presidential Medal of Freedom from Trump.

A White House aide explained that Elvis was chosen for “defining the American culture for millions. Merging gospel, country and rhythm and blues, [he created] a totally unique sound.”

On the evening of August 16, 1977, Presley was scheduled to fly out of Memphis to begin another tour. That afternoon, Ginger Alden discovered him in an unresponsive state on a bathroom floor. According to her eyewitness account, “Elvis looked as if his entire body had completely frozen in a seated position while using the commode and then had fallen forward, in that fixed position, directly in front of it. […]

It was clear that, from the time whatever hit him to the moment he had landed on the floor, Elvis hadn’t moved.” Attempts to revive him failed, and his death was officially pronounced at 3:30 p.m. at the Baptist Memorial Hospital.