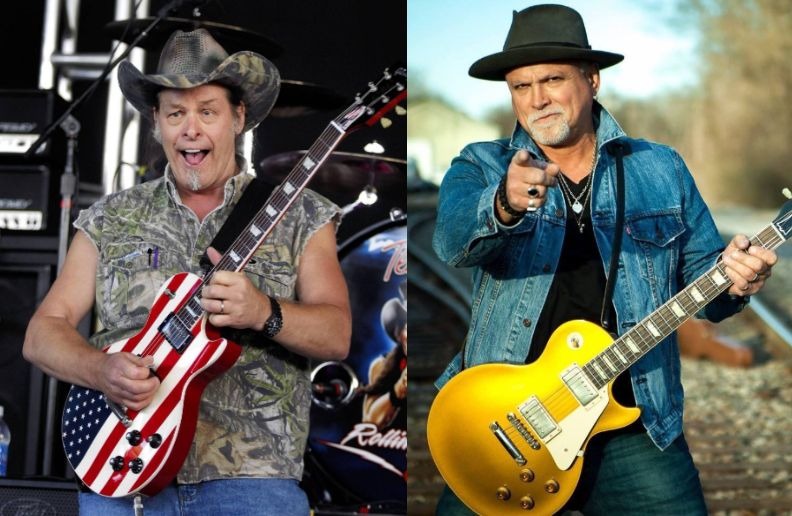 In an interview with Eddie Trunk, the singer and guitarist Derek St. Holmes talked about being shot twice by Ted Nugent.

How many times have you been in and out of Nugent’s band?

Have you been shot by Nugent?

So you’ve actually lived to tell about being in Nugent’s band twice.

When you first met Nugent, how was that? When was that?

What was that band called?

“That was called Scott. We used to just play our own music. I didn’t play other people’s stuff, I just wrote my own songs.

“But his ex-tour manager said, ‘You guys should open up for some of Ted’s shows. There’s not gonna be any money in it, but I think it would be good exposure.’

“So we did. I opened up maybe three or four shows, and before you know it, Ted’s showing up at shows.”

Were you the singer in that band?

“So he would see me play. And every time I look over, he’s on the side of the stage checking me out. And it took a long time, he wasn’t crazy about getting another guitar player I think. So it took a while. It took him until 1974.

“He said, ‘Hey, want to come out and rehearse a little bit? Want to see how it goes?’ I said, ‘Yeah, I’ll drive up.’ So I drive up, I play with him for 20 minutes in the basement of this farmhouse on 100 acres in the middle of nowhere.

“And after 20 minutes, he stops playing, everybody stops, he looks at me and goes, ‘How many Marshalls do you want?’ And I thought, ‘Does that mean I’m hired?’. I said, ‘I’ll take two.’ That was it.

“Then he said, ‘We’re gonna go out on tour next week, just do a couple of shows. Do you wanna go?’ I said, ‘Yeah, I’ll go.’ So I went and we didn’t come home for like three or four weeks. He lied to me. [Laughs]

“We went out and we rocked it. And we never stopped playing. We probably used to do 330 shows per year.”