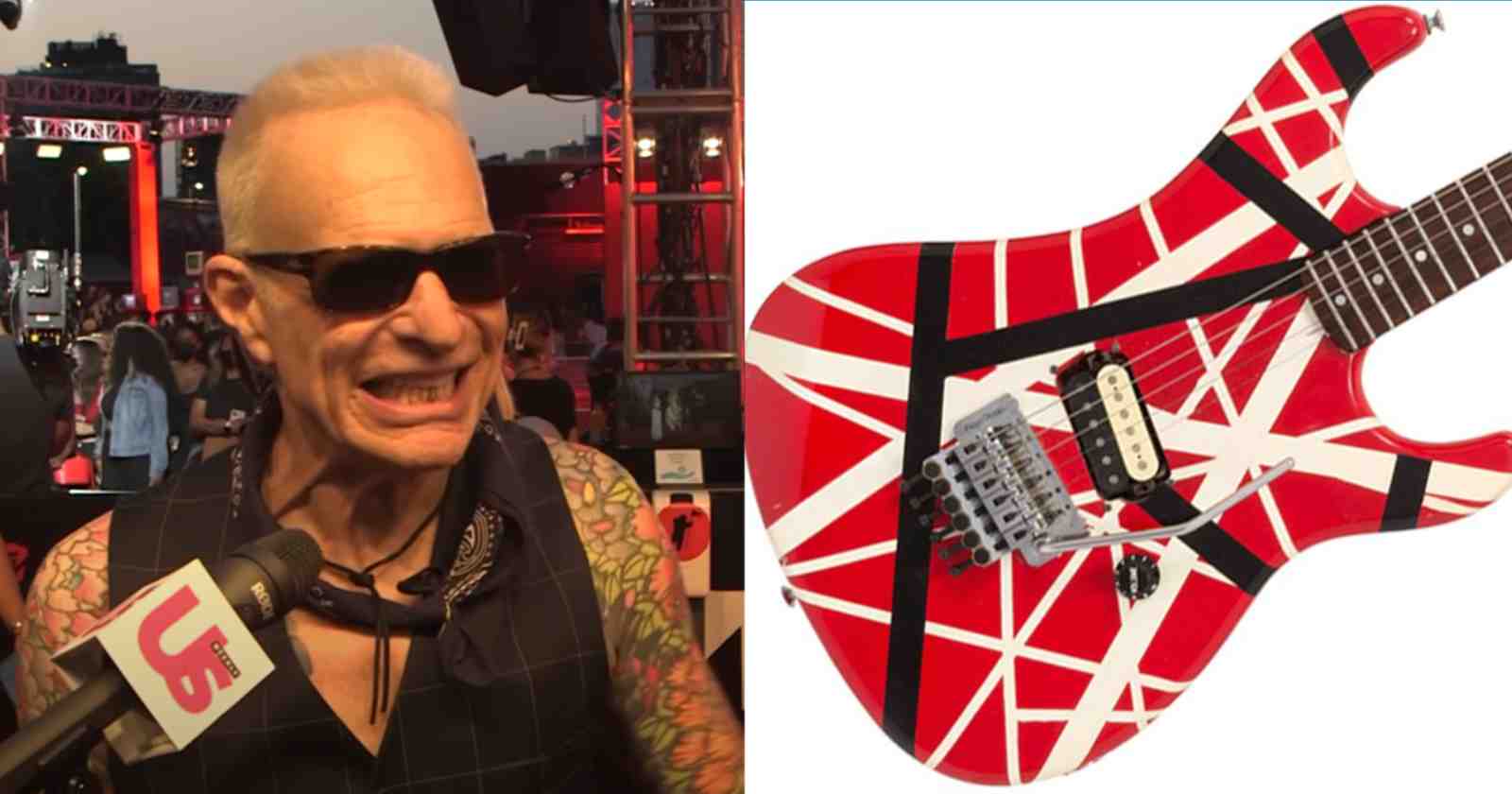 The original Van Halen singer David Lee Roth explained in a video/audio posted on his Youtube Channel (Transcribed by Rock and Roll Garage) how he helped to create the design of Eddie Van Halen’s famous guitar called “Frankenstrat”. The musician, who is not always direct when speaking said that he decided to talk about the subject because many fans were talking about how similar his latest art work was to the guitar.

“We’ve been getting a lot of cards and letters, digitally so to speak, in regards to the similarities between my work and the stripes on Eddie’s guitar and that’s because it’s my work. Alex Van Halen and I speak on the phone frequently now and we laugh like pirates. We were laughing not long ago on the phone about, and Alex was there, when I walked in with three rolls of tape, one roll of grey duct tape, one roll of black, not very sticky and the fucking thing kept coming off, electrician’s tape and one roll of blue R tape, like we use for pin striping.”

“I still use that today for you know, whenever you put something on the painting or whatever. I’ve been walking around with a paintbrush in my back pocket, mom saw I do that since I was 5 years old, that’s what you do when dad is a student for the first 10 years. Ed’s experience was that he was walking around with a guitar pick in his pocket. Was a great moment, one of those epic moments, ‘Guys, guys, guys. I thought of four notes, I call it da, da, da, da’. Well, in Beethoven’s day that was a big move (laughs), Beethoven had one hit ‘da, da, da, da’ and I don’t even have to sing it.”

“I sad to Al, because this was like mid-70s, 75/76, I said to Ed, an expanding linear pattern, because the white plain guitar is eerily, eerily reminiscent baby of Jimi Hendrix and The Chamber Brothers. At that time, Hendrix was still very nearby having recently departed. The plain white Strat, a little bit reminscent of mundo, sorry I slipped into español but I think you got it.”

“At that point I said ‘an expanding linear pattern’, what is that? We laid it down and ‘kaboom’, within like four minutes I laid it out. Including the little squiggle that is from the tape. The non-sticky black electrician’s tape that is designed to be putting on and taken off very quickly. Would pull because we were playing five sets at night and get all sweaty and not ready it contract.”

“Much to their credit later, and I’m not even, I haven’t looked at the guitar in years and I haven’t done research, this isn’t a science lesson, this is just my memory. My memory is great. I laid it out in like 5, 10 minutes. The tape instantly pulled it, made the squiggle. Later on we spray paint it and pull the tape like pin striping a low rider, part of our ‘cultura’ (Lee Roth says Culture in Spanish), okay.”

“And you get what we call a half tone version of it, it is what a negative is to a regular photograph. So essentially I say with a great big sense of humor ‘I invented coffee, they invented a cup’ (laughs). Later they added colors to it, gloriously.”

“We were playing in San Bernadino and there is a famous truck stop out there. I came back with one of those little bubble convex mirrors and a couple of little red reflectors and said ‘cherry on top, bingo, ringo’. Wheather or not The Beatles actually said, we’d like to think they did and I said it right now. Eddie drilled the holes and put in there and see at the Smithsonian.”

“Let’s define that very, very carefully, which is like the house I lived in Altadena, is now the size of our one-third of the the garage area, we call it. It’s not even a room and in the garage area, from which we all come, would be hanging a really thick wooden version of the guitar spray painted with the tape getting ready to pull and they just started using only the pullable blue arc tape.”

“They gave each version of it Rudy Larren, our guitar tech at the time, gave each version a name. The very first name, I don’t recollect, it may well have been Frankenstein and you know, they developed an industry. Eddie was way better at business that I have ever been. They started an industry. It’s not just a franchise, it’s a way of thinking guitar. Is one of the most recognizable symbols of all time in the sport, in this regard here.”

“It’s on everything from electric toothbrushes to shoelaces. I’m sure in the Iraq conflict somebody dropped a bomb with that design on it (laughs) or painted on their helmet. Or somebody threw a handkerchief with tha design on it, when we buried some of our friends and comrades. ”

(The guitar was originally white) “and we put tape on it and then ultimately reflectors, whatever, the tape instantly started pulling and coming off because we were playing five 45 minutes sets at night, we called it the ‘college of musical knowledge’. Why did four people invented the telephone on four different continents without knowing each other? Because it had to be invented.”

“I invented soup, these homeboys invented spatula and that’s poetry, for somebody somewhere said that ‘wouldn’t be easier, dot, dot, dot’ which is latin to spray paint the motherfucker and pull the tape. I hate to simplify genius and that design wouldn’t have gone anywhere without Eddie, sending it and giving it the shape and shine that it did. I’m just proud to have been part of it, the first part”.