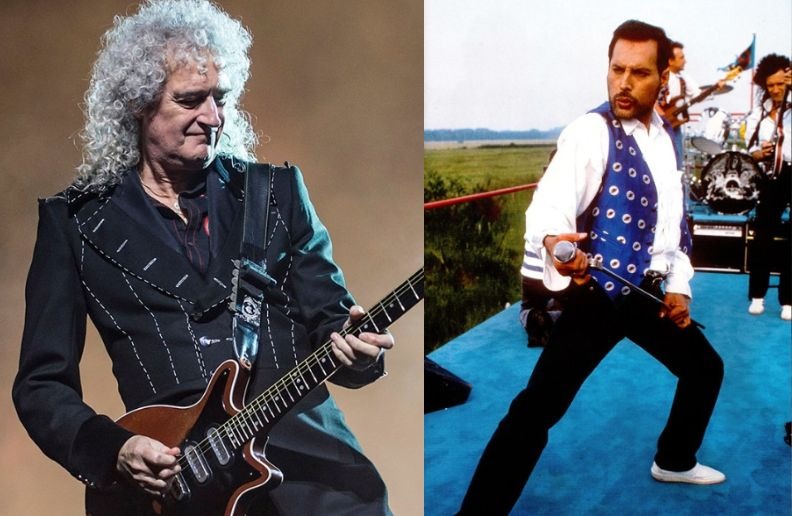 In 2016, actor Sacha Baron Cohen drew attention by revealing in an interview with Howard Stern that the initial project of the movie that would become “Bohemian Rhapsody” was to show how Queen followed without Freddie Mercury, who died in 1991.

Cohen was even tipped to take on the lead role in the production. However, guitarist Brian May denied the actor statement.

Cohen said at the time:

“There are amazing stories about Freddie Mercury. The guy was wild. I mean he was living an extreme lifestyle. There are stories of… little people with plates with cocaine on their heads walking around a party.”

“A member of the band, I won’t say who, he said, ‘This is such a great movie because it’s got such an amazing thing that happens in the middle of the movie,’” Cohen recalled. “I go, ‘What happens in the middle of the movie?’ He goes, ‘Freddie dies.’” While Cohen assumed the band meant the film would be structured non-linearly like Pulp Fiction, he soon realized that they wanted the second half of the film to focus on how Queen carried on after Mercury’s death in 1991.

Brian May, in turn, pointed out that allegations about the film’s initial design are “totally lies.” The guitarist said the plan was always to end the show with Live Aid’s 1985 show, seen by May as Queen’s pinnacle.

“There’s a high point there, and it’s always been the case since the first scripts.” We felt that was the pinnacle, despite what some people told the press, who ‘know the whole thing.”

Someone whose name will not be quoted said, ‘Oh, they’re going to show Freddie dying in the middle of the movie and all the rest will be about life without Freddie.’ Totally lie. It’s all about Freddie and I think Live Aid is a good place for the end,” he said.

“Who knows, maybe the movie will get a sequel,” May concluded with laughter and joking.

The role of Freddie Mercury in “Bohemian Rhapsody” ended up with Rami Malek after Sacha Baron Cohen disagreed with the bias the feature would have. He wanted the story to show Mercury’s personal life, with an indicative rating for people over 18, while the script indicated a focus on the singer’s career.

During the same interview with Classic Rock, Brian May said it would be “a disaster” if Sacha Baron Cohen was cast for the role. “I think we figured out the size of the disaster right away”.

“And it was not hard to see that. But, yes, it was one of the problems we almost had. I think we were nervous in the beginning when the selection began. It’s hard to think of: someone playing a part about you, “he said.”