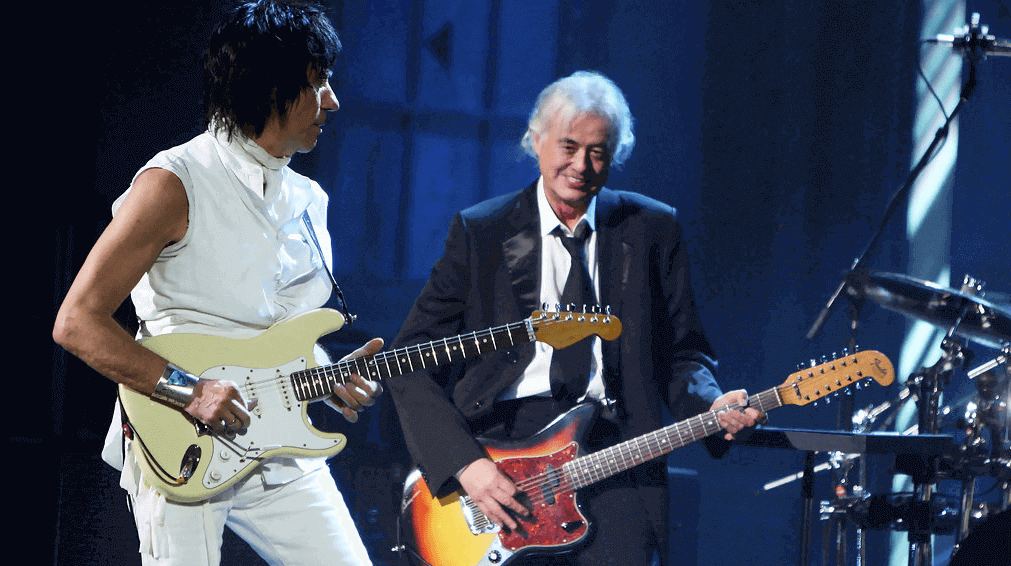 Back in 2009 the ex-Yardbirds Jeff Beck and Jimmy Page performed at the Rock And Roll Hall Of Fame induction “Beck’s Bolero” and Led Zeppelin’s “Immigrant Song” and it was pretty awesome!

Yardbirds (“Roger the Engineer”) was released in June 1966 and, shortly thereafter, Samwell-Smith quit the band at a drunken gig at Queen’s College in Oxford, U.K., to embark on a career as a record producer. Jimmy Page, who was at the show, agreed that night to play bass until rhythm guitarist Dreja could rehearse on it.

The band hit the road with Page on bass, and Beck and Dreja on guitars, playing dates in Paris, the U.K. and a barnstorming tour of Midwestern U.S. and the California coast. Beck fell ill late in the tour, and was hospitalized in San Francisco. Page took over the lead guitar duties at the Carousel Ballroom (San Francisco) 25 August and Dreja switched to bass.

Beck stayed in San Francisco to recuperate with girlfriend Mary Hughes, blond beach party film actress and model, while the rest of the band finished up the tour. Reunited in London, Dreja would remain on bass and the dual lead guitar attack was born.

The Beck-Page lead guitar tandem created the avant garde psychedelic rock classic “Happenings Ten Years Time Ago” (with future Led Zeppelin bassist John Paul Jones on bass instead of Dreja), recorded in July and Sept. of 1966. “Happenings” was backed in the U.K. with “Psycho Daisies”, an embryonic garage punk track featuring Beck on vocals (he mentions Mary Hughes in the lyric) and lead guitar and Page on bass. The “Happenings” U.S. B-side, “The Nazz Are Blue”, also features a rare lead vocal by Beck.