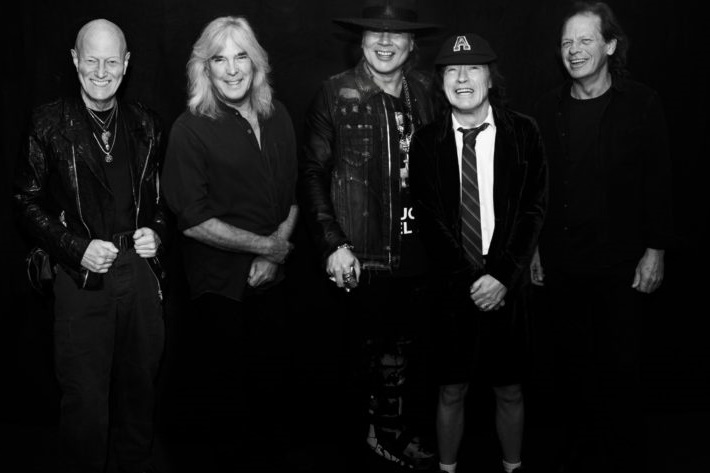 Drummer Chris Slade praised Guns N ‘Roses frontman Axl Rose in an interview with Eonmusic. Both musicians played during the “Rock Or Bust” tour after owners of their positions, Phil Rudd and Brian Johnson, moved away on personal issues – Rudd was arrested on drug charges and death threat, while Johnson was about to lose his hearing.

See a part of the interview below:

What was it like with Axl Rose fronting AC/DC, and the shake-up of set list that came with it?

That all came from him. I was standing right next to him when he said to Angus; “Do you think we could do ‘Live Wire’ and ‘Riff Raff?” And Angus said; “Well, we don’t know them right now, but we’ll learn them”. I love playing ‘Riff Raff’, and I’ve never stopped playing it, even when I was working with like tribute bands or something. It’s one of my favourites actually, to play.

Do you think Axl fronting the band reinvigorated things somewhat?

Yes, absolutely. Angus was running around like a schoolboy, you know?! [*Laughs*] Sorry, I’m cracking myself up here! It did reinvigorate the band. Brian is great, as we all know; he’s a great personality and a great guy. Axl brought his voice to it. Like, I couldn’t believe the notes he hit; it was staggering, and I actually had no hope at all, when I heard that Axl was going to be in the band. I though; “Oh, what?!”, because I’d only ever heard that Guns ‘n’ Roses voice, but all great singers, they can change the timbre of their voice, and wow, he hit notes that dogs can only hear. It was unbelievable! I thought he did an amazing job. I could hear him very clearly because I use in-ear monitors, and it’s the best I’ve ever heard the band. 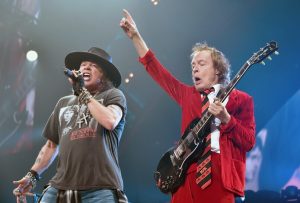 It seems from press reports, that four fifths of the ‘Back In Black’ line-up is recording again; with the exception of who is on the drum stool, do you agree that that’s how things should be right now?

Yes. If it works, good luck. It’s great. And why not? There’s all sorts of rumours; Axl’s going to be doing a track, Brian’s going to be doing a track; there’s so many variables here. And I’ve learned with AC/DC also, not to believe the rumours, because even fans fake things; things just get faked. But Angus is now over sixty, I think, so he’s still got a few years to go, if you go by me and Brian. That’s all he does; he relaxes by painting, and he smokes fags, and that’s about it, so the rest of the time, he’s playing guitar.

Finally, if you were a betting man, who would you say is playing bass on these sessions?

I’m not sure about that. But Stevie [Young] and Angus both play bass. Would Cliff come out of retirement? It depends on if he’s bored or not, because all he will want to do these days is go fishing with his son, who is a professional fisherman. So, I don’t know. It’s possible, of course, but there again, it’s all rumours. But Angus is very big, family-orientated, a la Stevie, so I wouldn’t be surprised if there’s a nephew or a cousin or something who plays bass So, that’s just a thought.