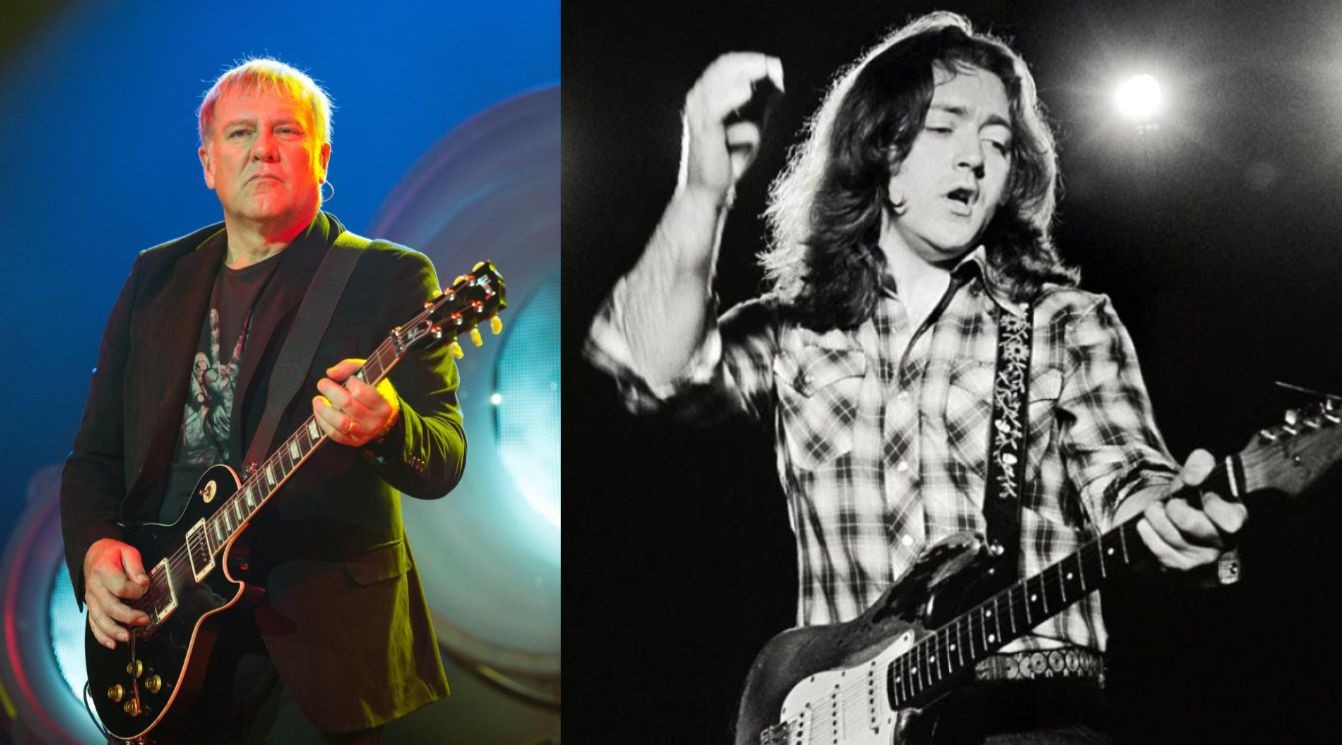 In an interview for Music Vaultz, legendary Rush guitarist Alex Lifeson recalled of when they opened for the also legendary Rory Gallagher.

“I think it was during the Taste period [Rory was in the band between 1966 and 1970], I was really impressed with Rory’s playing as a guitarist,” the musician said about Gallagher’s influence, adding (transcribed by UG):

“He was in a lot of ways a great rock guitarist. He had so much energy in his playing, and he wasn’t the typical blues player. He had a style of his own, and it was a reflection of his soul, truly.

“His vocals and his guitar playing together made for this really really special thing, that very few people had.”

Rush opened for Rory in 1974. Can you tell us about that tour?

“We were doing a lot of sporadic dates; we had some club dates mixed in that we were headlining small, like, bars, but we did some dates with some other bands that we really looked up to. Nazareth was one and then playing with Rory was a real treat.”

“It was in the fall of 1974, we did a cross-Canada tour with some dates in the States and the northwest coast and into Los Angeles.”

“We’re 20 years old, this is our first tour, it’s so exciting, we didn’t know our place so we tried to stay in the background and be polite as possible, and not be a bunch of dicks basically.”

“Right from the get-go, the whole band, Rory especially, they were so hospitable and accommodating and they let us do an encore, and a lot of bands didn’t do that with their opening acts in that time.”

“They were very approachable, so we got to spend some time, I would watch Rory every night, we were one of the opening acts on a three-act show, so we were only on usually for about 20 minutes or half an hour or something.”

“I would watch his set and go back to the dressing room and just play, just because I was so inspired by watching him play. Honest to god, his soul was just amazing, and to see him close his eyes and just get lost in his playing was truly, truly remarkable.”

“In 1982, Rory opened for us. There was an offer for Rory to open for a tour, and we were, like, absolutely over it. We ended up doing about three months together in that period in ’82 and that’s when I really got to know him.”

“We spent a lot of time together, he would come by and we would sit and talk for hours and maybe drink a little bit too much and whatever else, but this was our pattern.”

“And then we played and there was so much respect for them. And we returned the favor, we made sure they got everything that they ever needed on any show, complete freedom to do whatever they wanted.”

“We were so honored to have them out with us, and he and I talked about all kinds of things – politics, family and him being from Ireland, my ancestors coming from former Yugoslavia and the same sort of issues there.”

“We spent hours and hours talking about that sort of stuff. He bought me a copy of [Irish writer] Flann O’Brien’s ‘The Third Policeman,’ and I was really touched that he would think to do that. He said, ‘You got to read it, he’s a great satirist and his books are great, it gives you an eye for that Irish humor.’

“I read the book and I got back to him, days later I guess, said I really enjoyed it. We had a bit of a break, he went back to Ireland and then came back to North America, he bought me the whole series and gave me a whole series of books. He said, ‘If you like that one so much, read these.’

“That was the kind of guy he was, it wasn’t just about the music in the band and his guitar and all of that stuff. It was his personality and his soul, he was so thoughtful and considerate to other people, so polite. Honestly, he was such a wonderful person, never mind his talents and skills.”

It seemed like Rory only ever played one guitar.

“Sure it looks like it. I can’t remember if he had any other instruments that he played any other guitars. There’s a whole history for that ’61 Strat and the reason he ordered a red one I think, that Sunburst one was the one that ended up coming, and that was his first guitar.”

“Did he have a love affair with that guitar? I’m guessing probably most of us do who have one particular instrument that we’re very close to.”