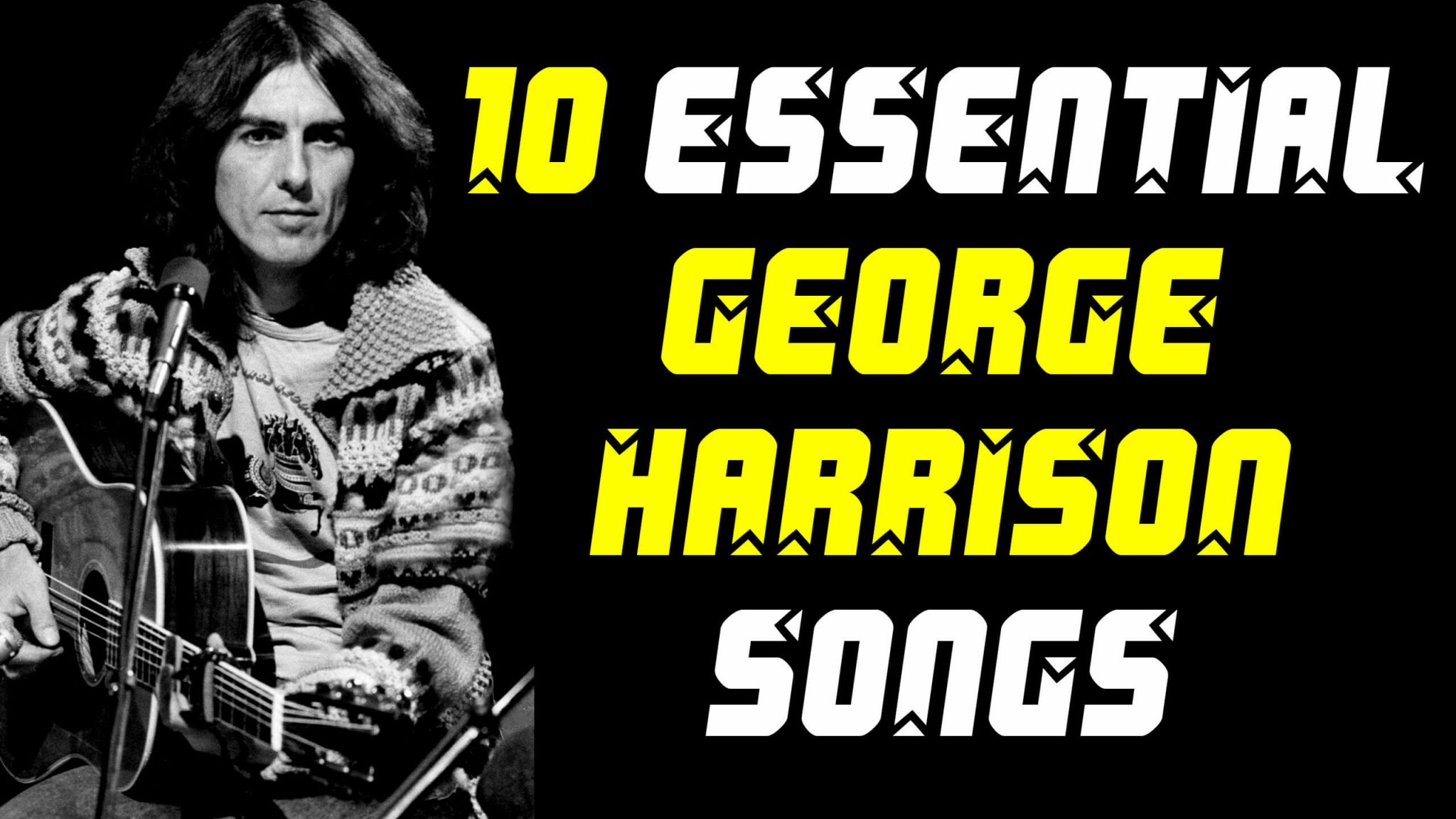 George Harrison is the favorite Beatle of many people and he had a fantastic solo career. His music is transcendental, connects us directly with spirituality with the arrangements and the many letters that speak about faith.

He was in full contact with his soul and existence. Also passed on this search for the answers of the mysteries of life and religion. He shared this on his songs with an incredible power. While criticizing how blind we were because of our busy and meaningless problems.

So, to share all the greatness of his solo career here are the 10 essential George Harrison solo career songs!

The song song was released on his 1970 solo album All Things Must Pass. Harrison and Russell performed the song at the Concert for Bangladesh in 1971, and Eric Clapton performed it at the Concert for George in 2002. The song warns against permitting illusion from getting in the way of one’s true purpose, an admonition that, like the content of “My Sweet Lord”, reflects the influence of the Radha Krishna Temple.

“All Things Must Pass”

Billy Preston released the song originally – as “All Things (Must) Pass” – on his Apple Records album Encouraging Words (1970), after the Beatles had rejected it for inclusion on their Let It Be album in January 1969.

The composition reflects the influence of the Band’s sound and communal music-making on Harrison, after he had spent time with the group in Woodstock, New York, in late 1968, while Timothy Leary’s poem “All Things Pass”, a psychedelic adaptation of the Tao Te Ching, provided inspiration for his song lyrics.

The subject matter deals with the transient nature of human existence, and in Harrison’s All Things Must Pass reading, words and music combine to reflect impressions of optimism against fatalism.

On release, together with Barry Feinstein’s album cover image, commentators viewed the song as a statement on the Beatles’ break-up. Widely regarded as one of Harrison’s finest compositions, its rejection by his former band has provoked comment from biographers and reviewers.

Harrison wrote the song following his temporary departure from the Beatles in January 1969. During the troubled Get Back sessions that resulted in their Let It Be album and film.

The lyrics reflect his frustration with the atmosphere in the group at that time – namely, Paul McCartney’s over-assertiveness and criticism of his guitar playing. Also John Lennon‘s lack of engagement with the project and dismissal of Harrison as a songwriter. And Yoko Ono’s constant involvement in the band’s activities.

Music critics and biographers recognise the song as Harrison’s statement of personal and artistic freedom from the Beatles. Its creation contrasted sharply with his rewarding collaborations outside the group in the months before the Get Back project. Particularly with Bob Dylan and the Band in upstate New York

The song was released in November 1970 on his triple album All Things Must Pass. Harrison originally gave the song to his fellow Apple Records artist Billy Preston to record; this version, which Harrison co-produced, appeared on Preston’s Encouraging Words album in September 1970.

He wrote “My Sweet Lord” in praise of the Hindu god Krishna. While at the same time intending the lyrics to serve as a call to abandon religious sectarianism through his deliberate blending of the Hebrew word hallelujah with chants of “Hare Krishna” and Vedic prayer.

The recording features producer Phil Spector’s Wall of Sound treatment and heralded the arrival of Harrison’s much-admired slide guitar technique. Preston, Ringo Starr, Eric Clapton, and the group Badfinger are among the other musicians appearing on the recording.

“What Is Life” appeared as the B-side to “My Sweet Lord”. Which was the best-selling single of 1971. Harrison’s backing musicians on the song include Eric Clapton and the entire Delaney & Bonnie Friends band. With whom he had toured during the final months of the Beatles.

An uptempo composition in the soul genre, “What Is Life” is one of several Harrison love songs that appear to be directed at both a woman and a deity. Harrison wrote the song in 1969 and originally intended it as a track for his friend and Apple protégé Billy Preston to record.

“Give Me Love (Give Me Peace On Earth)”

The song is the opening track of his 1973 album Living in the Material World. And became Harrison’s second US number 1, after “My Sweet Lord”.

The song demoted Paul McCartney and Wings’ “My Love” from the top of the Billboard Hot 100. Marking the only occasion that two former Beatles have held the top two chart positions in America. The single also reached the top ten in Britain, Canada, Australia and other countries around the world.

“All Those Years Ago”

Having previously recorded the music for the song, Harrison tailored the lyrics to serve as a personal tribute to his former Beatles bandmate John Lennon. Following the latter’s murder on 8 December 1980.

The recording also includes performances by ex-Beatles Ringo Starr, on drums, and Paul McCartney, who overdubbed backing vocals onto the basic track. Released in May 1981, the single spent three weeks at number 2 on the US Billboard Hot 100 (kept off the top spot by Kim Carnes’s “Bette Davis Eyes”). Also peaked at number 13 on the UK Singles Chart.

“All Those Years Ago” was the first time that Harrison, McCartney and Starr had appeared on the same recording since the Beatles’ “I Me Mine” in 1970. And the last time they would appear together until “Free As a Bird”, in 1995.

“Got My Mind Set on You” is a song written and composed by Rudy Clark and originally recorded by James Ray in 1962, under the title “I’ve Got My Mind Set on You”. In 1987, George Harrison released a cover version of the song as a single. And released it on his album, Cloud Nine, which he had recorded on his own Dark Horse Records label.

Two music videos were released for the cover version. The first, directed by Gary Weis, starred Alexis Denisof vying for the heart of a girl in an amusement arcade. It featured Harrison and the band inside of a movie viewer, while the young man tries to win a toy ballerina for the girl.

The second, which Weis also directed, depicts Harrison sitting and playing in a study. As the song progresses, furniture and knick-knacks (like a stuffed squirrel, sentient chainsaw, a statue and mounted stag and warthog) begin to dance along with the song.

In the middle of the video, Harrison (through the use of a stunt double) performs a backflip from his chair and follows it with a dance routine before jumping back to his seat.

“When We Was Fab”

The lyrics serve as a nostalgic reflection by George Harrison on the days of Beatlemania during the 1960s. When the Beatles were first referred to as “the Fab Four”. Harrison co-wrote the song with Jeff Lynne, who also co-produced the track. The recording references the psychedelic sound that the Beatles had helped popularise in 1967, through its use of sitar, cello, and backwards-relayed effects.

Harrison’s former Beatles bandmate Ringo Starr is among the other musicians on the track. The single was accompanied by an innovative music video.

Ringo Starr appears first as Harrison’s “assistant” and then as the drummer. Also making guest appearances in the video are Jeff Lynne, Elton John (putting the coin in the cup), and Neil Aspinall (the Beatles’ road manager and personal assistant, holding a copy of John Lennon’s 1971 Imagine album).

Paul McCartney is rumored to have appeared in the walrus suit, playing the bass. With Harrison stating in a televised interview that it was indeed Paul McCartney in the promo video. “But he was camera shy that day and he kept his walrus mask on.”

The bass player in the video was playing left handed. Thus implying that it was at least a reference to McCartney; however, in a 1995 interview, McCartney said, “George wanted me to be in it but I wasn’t available. So I suggested that he put someone else in the walrus and tell everyone that it was me.”  Other appearances feature Paul Simon (pushing a cart) and Ray Cooper.

Recordings of the album began over a decade before George Harrison’s death but were repeatedly delayed. The album was completed by Harrison’s son Dhani and longtime friend and collaborator Jeff Lynne. It reached the top 30 in the UK and top 20 in the US, and had reasonably favourable reviews.

Harrison successfully battled throat cancer in 1997 and in 2001 he underwent surgery to remove a cancerous growth from one of his lungs. And radiotherapy for lung cancer which had metastasised to his brain.

Once he realised it was an irreversible situation, he worked further on the album’s songs in conjunction with Dhani and his old collaborator Jeff Lynne until he was unable to do more.

Watch Bob Dylan singing “Learning To Fly” as tribute to Tom Petty
Back In Time: Slash, Ace Frehley and more playing “God Of Thunder”
To Top