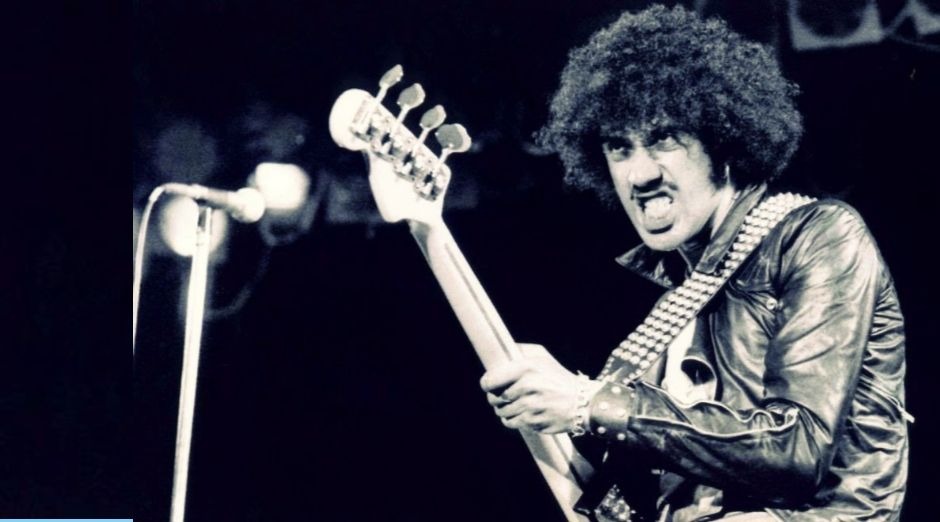 Phil Lynott was definitely one of the greatest frontmans of all time that died too soon in January 4, 1986 at 36. Thin Lizzy’s bassist and singer made a huge success with the band from 1969 to 1983, releasing 12 amazing albums that gave us classics such as “The Boys Are Back In Town”, “Cowboy Song”, “Whiskey In The Jar”, “Jailbreak” and many more.

In 1983, Thin Lizzy ended in a hazy and weird way. The band regained good form and success with the entry of John Sykes on the album “Thunder And Lightning”, but the deplorable state of Lynott and guitarist Scott Gorham due to their addiction, apart from the musical differences between them, ended the group.

Lynott’s marriage with Caroline Crowther ended in 1984 also because of addiction problems. As a result, his daughters Sarah and Cathleen (both inspired songs named after them and featured on Thin Lizzy’s albums “Black Rose: A Rock Legend” and “The Phil Lynott Album”), also left.

With no family and no band, Phil Lynott sank into heroin. He didn’t think the addiction would hurt him and refused help. Psychologically, Lynott was shaken by something no one can explain: Thin Lizzy failed. Despite some successful moments, it has not reached half of what it could. Perhaps because he knew of his own ability, Phil definitely did not conform to the end of the group in 1983.

In an attempt by Phil to continue to play, his new band, the Grand Slam started badly. The band consisted of Lynott, John Sykes and Brian Downey. But it took a while to get into gear and Downey left, while Sykes preferred Whitesnake’s offer. Robbie Brennan (drums), Laurence Archer (guitar), Mark Stanway (keyboards) and Donal “Doish” Nagle (guitar) joined the group, which for some critics was just an ill-fated version of Thin Lizzy.

Today it is possible to check out several demos of the band in posthumous releases. Versatility was the hallmark of the Grand Slam: a hint of funk, a bit of hip hop, something new wave and the perfect lyrics of Phil Lynott, who was excited about the project. He wanted to get rid of the “Thin Lizzy Secondary” label instead.

Unfortunately it Failed. The media still questioned why Thin Lizzy had failed to “conquer America” ​​- something that could have happened in the days of “Jailbreak” had it not been for the band’s problems with the record company at the time. Nevertheless, the Grand Slam was doing well and winning audiences in Ireland and the United Kingdom. Lynott looked for a deal with a new record label, but no one wanted to sign with a decadent addict.

Still motivated, Phil Lynott was looking for an opportunity to record a video. but when he went to California to get something, his bandmates had left the Grand Slam to pursue other projects. Lynott’s latest creative sigh is in Gary Moore‘s most successful single, “Out In The Fields.”

Both appear together in the song and the video, which was responsible for putting Moore in the spotlight for good. This led Polydor to offer him a contract to work on one more solo album – it would be the third in his discography. Nevertheless, his manager, Chris Morrison, left Lynott: he invested $ 100,000 of his own money in the soon-to-be-finished Grand Slam.

Alongside his partnership with Moore, Phil Lynott has also worked with Huey Lewis and Junior (UK) as a composer and even on unreleased duets. Excited by Polydor’s proposal, Lynott planned to release his third solo album in 1986 – the year of his death. Weeks after his contract with Polydor, rumors that Bob Geldof would invite Lynott to a Thin Lizzy meeting at Live Aid 1985 excited the musician. Event organizers Geldof and Midge Ure were friends of Phil.

The festival took place and helped to promote U2, the Irish band. But none of Thin Lizzy or Phil Lynott, who got upset and then sank in forever. He believed that the success of Live Aid, which is still cited as one of the biggest events in music history, would be enough to make it burst.

In an interview, Darren Wharton recalled the “Live Aid case”: “It was a tragic decision. It could be a recovery for Phil, who was having drug problems. Despite the problems, he could be fine for the show. I don’t think Phil ever forgave Bob and Midge for that. ” During the broadcast, Lynott was at RTE Studios in Ireland, swollen and very sweaty. Days later, he met with artist and friend Jim Fitzpatrick, who reports: “I think Live Aid destroyed it. He was the biggest rock star in Ireland and was excluded. I don’t condemn anyone, but that was decisive. I know that because he told me.”

Drowning in drugs, Phil Lynott tried to follow through on his plans to record his third solo album, but the heroine left him weakened. On a family trip to the city of Marbella, Spain, Lynott busted and spoiled the ride. There, he also had a solo concert scheduled and invited Grand Slam musicians to play with him. However, the show was a disaster.

Producer Paul Hardcastle tried to lift him and out of this partnership came Lynott’s last single, “Nineteen”, weeks before his death. The song even got a clip, which would represent another moment of rehabilitation of Phil. Huey Lewis was also about to launch, with his help. But the heroine prevented him from seeing Lewis’s rise as a musician in addition to his own solo album ready.

“Nineteen” failed as a single because of Lynott’s reputation as a “junkie” – the moment the UK lived in was completely anti-drug.

That made him locked up in his Richmond home until he was practically taken to the hospital where he died at age 36.

In an interview, Scott Gorham described his last visit to Phil Lynott:

“He was fat, breathing heavily, and when he spoke of the future, I thought it would be a while before he regained his shape. So we had a chat, wish each other a merry Christmas and agreed to meet again soon.”

Phil Lynott’s last Christmas was chaotic. Lynott’s roadie Charlie McClellan exposed the situation to his mother, Philomena, who eventually learned of her son’s addiction. She finally knew Phil was sick. Still with her mother at home, Lynott negotiated drugs with a drug dealer until she caught the moment.

Despite the discussion generated by the nonsense attitude, he consumed the heroine he had taken and joined his daughters to open their gifts. At this point, he passed out and was rushed to a hospital. Lynott collapsed. It was falling for good. The body did not resist and ten days later, he died of heart failure and pneumonia due to a septicemia (severe infection of the organism by germs) aggravated by drug and alcohol use.

See the announcement of the death of Phil Lynott: